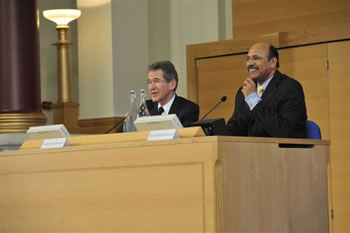 Abdallah Jum’ah is the former President and CEO of Saudi Aramco, the state-owned national oil company of Saudi Arabia. Saudi Aramco produces more than three billion barrels of oil a year and is the leading supplier of crude oil to major economies such as China, Japan and India. Abdallah Jum’ah came to London in June 2009 to deliver The Royal Academy of Engineering’s International Lecture. Before the lecture he agreed to share his views on oil and energy with Lord Browne, Academy President and former group Chief Executive of BP.

LORD BROWNE:
I think when it comes to oil, there is nothing bigger than Saudi Arabia, and when it comes to oil companies, there is nothing bigger than Saudi Aramco. So Abdallah, we are going to talk about a few things that make oil, technology and the world tick. Perhaps I could start by asking you one simple question: what do you think the future of oil is? What about supply and what about demand?

ABDALLAH JUM’AH:
Oil is going to be with us for the long haul. I think there will be no problem with below ground, meaning there will be no problem with the amount of oil available. The problem will be above ground. Investment, regulatory environment and the like; people, advancement of technology, these are the issues that will be important. I do not think that we have reached oil peak, nor are we in the twilight era of the oil age.

LB: So peak oil is not on the horizon. But what about peak demand? When do you think demand will peak?

AJ: I do not know when demand will peak, but demand is going to pick up from hereon. If you just look at population growth and the wish of some people to improve their lot. In terms of real growth, moving from biomass, say, to cleaner energy resources, the demand is going to grow – look at China, look at India.

LB: It sounds like you do not see peak demand or supply, certainly not in the foreseeable future. The world must have done a very good job at exploration and production. How much contribution from technology has there been over the last few years and how do you see that developing?

AJ: I think human ingenuity is boundless and the improvements that we have seen over the last two or three decades are immense. Without horizontal drilling and 3D seismic technology, for instance, it would have been very difficult for us to bring a field like Shaybah to the market. You and I visited Shaybah. Shaybah was discovered back in 1968 and with vertical oils you need an endless number of wells to bring that capacity. With horizontal drilling we were able to put out 500,000 barrels per day, from just a little under 100 wells.

In Saudi Aramco, in the last 10 years we have been adding to our reserves and where did that oil come from? Some is from new discoveries, but some from improvement in our knowledge of what is happening underground, judging how thick the column is, or in calculating the water contact point. Technology has done a lot for us, and it will be a real challenge in the future to bring all the resources to market. The remaining oil will be in harder places to extract. Non-conventional oil needs a lot of technology to exploit. Then we need to add to that the environmental concerns. These are very important. The technologies to address the environmental concerns are going to
be daunting.

LB: The Kingdom of Saudi Arabia is avery big absorber of technology. But is it now a developer? Is there a relationship between Saudi Aramco and universities in the Kingdom?

These cover upstream technologies, cleaner fuels, carbon management in general and as a whole. The fields in Saudi Arabia are unique fields in many ways, in terms of their size and their characteristics, and therefore we integrate all the aspects of technology and engineering to put them together.

A lot of research is being done with institutions of learning outside the Kingdom and our position has been the following: today there is a focus in our research and development area on sequestration, transport is a big issue, of course, and on storage. We are experimenting. There is a pilot programme to see if carbon can be stored, first, in some of our fields. We are very far from using carbon for enhanced oil recovery. Our fields are very young, and this is not going to happen in the near future.

I presented to our board four years ago an environmental plan which had projects – I think they were in excess of around $3 billion – to address the issue of the environment in general and carbon management. We are trying to clean a lot of our plants. We have put in the investment to meet the emission standards and dispersion standards in our facilities but there is a lot of work to be done.

LB: I suppose when it comes to oil demand, it is primarily about transportation, and also about petrochemicals.

AJ: It is a question of time. I think at the end of the day, we do not know what it is, whether it is hydrogen or whatever. But I think today, let us face it, transportation is oil. It is 95% based on oil. Just look at the numbers from the International Energy Agency (IEA). Until last year the IEA was projecting a demand of between 120 to130 million barrels of oil – depending, of course, on what happens in the economy. So whatever comes in terms of alternative energy will supplement rather than replace oil in the foreseeable future.

LB: Let me change the subject now and ask who will the players be? Who will make all this oil supply available?

AJ: I think Saudi Aramco will continue to be a major player, but it will not be the only player in terms of conventional oil. But I think we need to see technologies that will bring trillions of non-conventional resources [oil obtained by means other than oil wells, such as tar sands or gas conversion] into the market. If we look at non-conventional oil, and if technology can give us only let us say 12% or 15% of that, that is equivalent to all the oil the world has produced, a trillion barrels. So who are going to be the players? I think if you bring in non-conventionals, Venezuela is going to be a big player, and Canada, the United States and Brazil will be big players as well.

AJ: The problem is that when the oil price goes down, the international oil companies and the independents just freeze everything including investment. When prices shoot up, they are still slow to act because they are waiting to see how high it is going to go before it flattens out. That is not the case, by the way, with Saudi Aramco. By Government edict Saudi Aramco has a policy of always keeping between 1.5 to 2 million barrels per day of extra capacity, so that the world does not see a hiccup in its supply.

People have to be realistic. In 2008, the world used 10 million barrels of oil and oil equivalent of energy per hour. When you look at alternative energy, it is a fraction of that. So I think that people have to be realistic about alternative energy and, when it comes, it is not going to replace but supplement it, because if there is no investment, people will need to use whatever is available, whatever BTUs [British thermal units] are available.

LB: When energy is plentiful, people consume it, especially if it is cheap. Let me ask you then my final question, which is about efficiency.

I can tell you that part of the research that is being done in Saudi Aramco is to look at a more efficient conventional internal combustion engine, we are looking at engine technologies together with other parties.

There is still a lot of room to conserve energy and once people use energy efficiently, they do not back to their old ways. In my opinion we have to look at all sources of energy with the same attitude. Oil is making our life good, excellent actually, and I feel that it will continue to play that role.

Owned by the Saudi Arabian Government, Saudi Aramco is a fully-integrated, global petroleum enterprise, and a world leader in exploration and producing, refining, distribution, shipping and marketing. The company manages proven conventional reserves of 260 billion barrels of oil, the largest of any company in the world, and manages the fourth-largest gas reserves in the world.

In addition to its headquarters in Saudi Arabia’s Eastern Province city of Dhahran, Saudi Aramco has affiliates, joint ventures and subsidiary offices in China, Japan, the Netherlands, the Republic of Korea, Singapore, Malaysia, the United Arab Emirates, the United Kingdom and the United States. More information about Saudi Aramco can be found at www.saudiaramco.com

When Abdallah Jum’ah gave his International Lecture he talked of the forthcoming emphasis that Saudi Arabia and Saudi Aramco will place on alternative fuels, especially solar energy. He pointed out that a new international graduate-level university, the King Abdullah University of Science and Technology (KAUST), is going to open for study in September 2009. Located on a 36 square kilometre campus along the Red Sea coast of Saudi Arabia, its purpose is to create an international community of scholars dedicated to advanced science.

One of KAUST’s major activities is going to be solar energy. Professor Ghassan Jabbur, President of the Solar Energy Research Center at KAUST, points out that in the future, Saudi Arabia could be a major exporter of sun-generated electricity. This would minimise Saudi’s reliance on oil, lengthening oil life as well as inventing a new technology.

The research centre intends to provide innovation in efficient and low-cost disruptive photovoltaic foundational technologies. Its Materials Chemistry and Engineering group will target several classes of materials including nanoparticles, quantum dots, molecular and polymeric materials, and hybrids. The Device Physics and Processing working group will study processing techniques such as vacuum, reactive deposition and liquid-based approaches.

This multidisciplinary approach is aimed at delivering KAUST’s goal of developing highly efficient solar cells at low cost. The Solar Energy Research Center will start with a strong focus on solar energy and then expand to encompass areas such as energy storage, wind energy, and geothermal energy.

A flexible polymer that stiffens on impact is now being used in protective sportswear, military equipment, and in coverings for high-value goods.