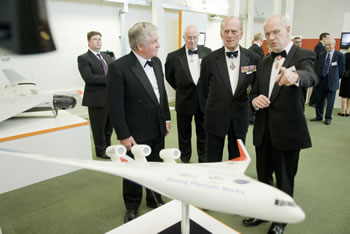 The Duke of Edinburgh joined some of the country’s leading engineers and industry representatives at the Academy’s June 2009 annual soirée and exhibition at Cranfield University in Bedfordshire.

The event was attended by over 200 guests from across academia and industry, in the presence of HRH Prince Philip, Senior Fellow of the Academy and hosted by Sir John O’Reilly FREng, Vice-Chancellor of Cranfield University.

The soirée was attended by a number of industry professionals, including representatives from Airbus, Brawn GP, Rolls-Royce, and Williams F1. The theme of the event was Innovation in Action and showcased examples of the university’s achievements across its specialist fields, including aerospace, bioscience, and the environment.

The pick of the exhibits included a design for a new blended-wing aircraft, designated the X-48B (pictured), and developed by Cranfield Aerospace Ltd in partnership with Boeing. Another attraction was an autonomous robot, winner of the Ministry of Defence’s first ‘Grand Challenge’ and designed to identify, monitor, and report military threats on the frontline. Spread over three days, the exhibition was supported by the Engineering and Physical Sciences Research Council.

Cranfield University is a wholly postgraduate institution. Individuals enrolled on its masters, doctorate and professional development programmes can make use of facilities that, in some cases, approach an industrial scale; these include an airport, aircraft cabin simulators, wind and icing tunnels, and an FIA (Formula One)-approved crash test facility. These facilities have allowed the university to work with a number of corporate partners to create and test new innovations in a number of fields.

More information is available at www.cranfield.ac.uk/raeevent 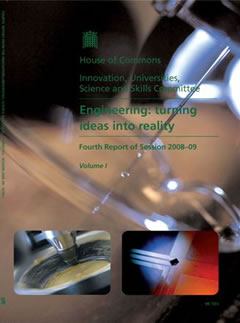 Lord Browne of Madingley, President of the Royal Academy of Engineering, and Dick Olver FREng joined Phil Willis MP at a meeting in July 2009 to explore the implications of a parliamentary committee report on engineering.

The House of Commons Innovation, Universities, Science and Skills Select Committee, chaired by Mr Willis, conducted a year-long, in-depth inquiry into engineering, which was completed in March 2009. Engineering: turning ideas into reality was overwhelmingly positive about the contribution of engineering to UK society and argued that engineering has the potential to transform the UK economy and to support recovery from the global recession.

However, the Committee expressed concerns about the general low profile of engineering and its contribution to society, which could deter young people from taking up engineering as a career. It argued that Government policy needs to be better informed by engineering advice at the earliest stage. It concluded that trained and experienced engineers are needed at all levels of the civil service and that there is a key role for the Academy in acting as a first port of call for Government when seeking advice.

Speaking at the meeting, organised by the Foundation for Science and Technology, Lord Browne said: “UK engineering is seen as an exemplar around the world. This worldwide reputation makes the UK an attractive place to do research and development.

“Engineering has two faces. One faces the sciences; the other commerce and finance. Engineering understands both and translates between the two.

“As an engineering community, we are now helping to provide expert advice on topics as diverse as critical infrastructure resilience and global water security. And, looking forward, we expect to be bringing this engineering flavour of policy advice to an ever-increasing range of policies and government objectives. Good scientific advice does not exist in a vacuum and neither does engineering advice. Good policy needs both; they are complementary.”

Chairman of the Committee, Phil Willis MP, said: “As Chairman of the soon-to-be-formed Science and Technology Committee, and you as the science and engineering community, we all need to scrutinise – and support – the work of the [newly formed] Department for Business, Innovation and Skills. We need to help it to maximise the work of brilliant British engineers to keep the UK at the head of the game. We need to make sure that UK engineering is successful, so that UK plc is successful.”

Dick Olver FREng, Chairman of BAE Systems, said: “Only through world-class engineering can the UK and the world hope to halt the deterioration of our ecosystems, and navigate our societies towards sustainable development. In the years to come, the search for alternative and sustainable sources of energy, water and food, will demand new skills and technologies, and more qualified engineers, leading to a scarcity of the necessary talent. Again, these shifts bring UK industry a real opportunity for world leadership.”

In a response to the debate, the Rt Hon The Lord Drayson, Minister for Science and Innovation, wrote: “Engineering is a singularly rewarding field that offers intellectual stimulation, challenge and hugely interesting and rewarding professional career prospects – which are suitable for both men and women. Most people who pursue careers in engineering (and science) will wind up working in multi-disciplinary teams where success will depend on the effective contributions of people from different disciplines. I believe that these approaches offer the best prospect of attracting more of the brightest and best in the country to pursue engineering qualifications and careers.

“We also value the focus provided by The Royal Academy of Engineering in acting as a conduit for advice to Government from the engineering community. I should also say how helpful it has been over recent years for the engineering institutions to work more closely together to produce coordinated and coherent advice – as what we need in Government is reliable and authoritative advice that we can use to make decisions.”

Further information can be found at www.foundation.org.uk
The full transcript of the report Engineering: turning ideas into reality can be downloaded at http://bit.ly/4I19O 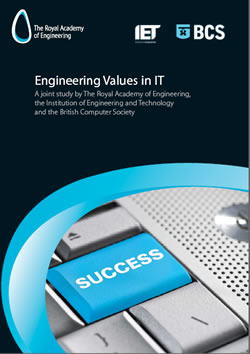 Front cover of the Skills in IT report

CALL FOR ENGINEERING SKILLS IN IT

The Royal Academy of Engineering has called on the Government and professional institutions to establish an advanced chartered qualification for engineers working on critical information technology systems, in a report on Engineering Values in IT.

IT systems now form a crucial part of the UK’s critical national infrastructure, supporting vital systems such as transport and communications networks, the health service, banking and retail systems.

Information technology underpins almost every aspect of our daily lives and, should any vital IT system fail, the disruption and damage caused could be immense. The critical role that IT now plays in security and the success of the national economy makes it imperative that computer systems are completely reliable and robust.

Recognising the need for a dependable IT infrastructure, the Academy is calling for IT professionals to become Chartered Engineers or Chartered IT Professionals.

The criticality of IT systems places a burden of professionalism on those who design and maintain them. This entails both a commitment to ethical standards and to maintaining expertise in what is a rapidly changing industry. The Academy report also calls on IT engineers to commit to the professional and ethical code of an institution, pledging to maintain proficiency, knowledge and competency.

In its report, the Academy recommends that professional bodies, under the direction of the UK Engineering Council and in conjunction with the Health and Safety Executive, develop domain-specific chartered qualifications for practitioners in high-consequence areas, including safety critical and secure systems.

The report is downloadable at www.raeng.org.uk/engineeringIT 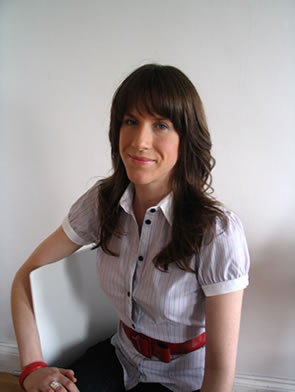 Dr Natasha McCarthy, a policy advisor at The Royal Academy of Engineering, was commissioned by Oneworld publications to write a book looking at engineering from a social and philosophical perspective. The result of her work is Engineering: A Beginner’s Guide, which was published in August 2009.

The book looks at the way engineers have contributed to shaping the physical world, society and our collective knowledge. It tells the story of how individual technologies, from the Dyson vacuum cleaner to the i-Limb Hand, have changed individuals’ daily lives, and describes the place of engineering as a whole in global society. The book also outlines the challenges created by the legacy of engineering, such as maintaining ageing infrastructure and mitigating the effects of climate change.

Dr McCarthy feels that her role as a policy advisor has given her a novel perspective on engineering and its place in our lives. Her involvement with projects at the Academy such as engineering ethics, philosophy of engineering and professionalism have given her a wide-ranging view of the subject.

“My intention is that the guide will give the non-engineer a sense of the range of engineering disciplines and the breadth of their impact,” she says. “And I hope the engineer reading this will get a new perspective on the work that they deal with on a daily basis. The publishers feel that engineers and engineering have a vital role to play in devising ways to support our quality of life long into the future.”

Professor Dame Wendy Hall FREng FRS says of Engineering: A Beginner’s Guide “This is a fantastic book, full of stories that can be enjoyed by anybody who is interested in innovation and creativity.”

Engineering: A Beginner’s Guide
is widely available to purchase. More information about the book is available at www.oneworld-publications.com 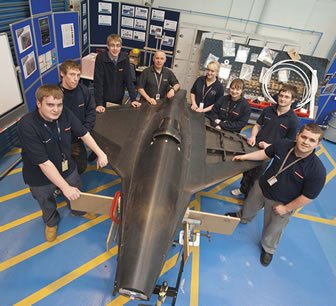 Engineering apprentices at BAE Systems are adding the final touches to an experimental aircraft that will test radical new methods of flight control.

The demonstrator aircraft has been built as part of a project to explore technologies destined for use on future unmanned aircraft systems (UAS). Known as Demon, the aircraft is the outcome of a project called FLAVIIR (Flapless Air Vehicle Integrated Industrial Research). This is a five-year, £6.5 million programme jointly funded by BAE Systems and the Engineering and Physical Sciences Research Council.

FLAVIIR brings together 10 universities, led by Cranfield University and BAE Systems. Its principal focus is to develop the technologies needed to build a low-cost, low-maintenance UAS with no conventional control surfaces such as wing flaps and without losing any performance compared to conventional aircraft.

The BAE apprentices working on Demon have taken the air frame, fitted it out and added all the wiring and electrical systems needed to create a functioning aircraft. Demon is now an 80 kg, jet-powered UAS with a wing span of 2.7 metres. In the final stages of assembly, it will make its first test flights later in 2009.

Richard Williams, Programme Director of BAE Systems Future Capability arm, said “Projects such as Demon have several advantages for BAE Systems. They help to ensure we get the greatest benefit from our invested research money and offer continued benefit from the increase in the capability and competencies of the universities involved.”

Furthermore, in order to build in added flexibility to the programme, £500,000 has been reserved for topics not considered at the outset – so-called ‘seedcorn’ projects. Such projects will start at various stages during the FLAVIIR programme, from wherever in the partnership the most innovative and relevant ideas emerge.