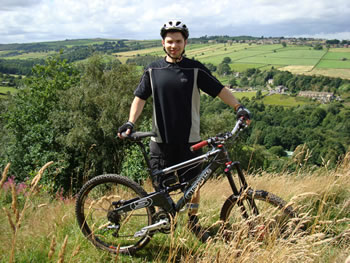 Dr David Batterbee has won the Academy ERA Foundation Entrepreneurs Award 2009 for an innovative device that can automatically alter a mountain bike’s suspension on varying terrain.

David Batterbee, from the Department of Mechanical Engineering at Sheffield University, developed a rear shock absorber for bikes that electronically monitors the state of the ground and optimises suspension for peak performance.

Dr Batterbee’s innovation uses a sensor to analyse the severity of the terrain and manipulates the suspension for the best comfort and most efficient ride. On smooth ground, rider-induced suspension movement is reduced to improve pedalling efficiency, while on rough terrain the suspension is aligned for maximum shock absorption.

The ERA Foundation Entrepreneurs Award recognises efforts to extract entrepreneurial promise from academic research, specifically in the field of electro-technology.

Dr Batterbee intends to use the £40,000 prize to fund the start-up costs of getting the first product to market.

“I feel privileged to have received such substantial funds and the mentoring that has been made available from leading business experts will be invaluable during the start-up period,” he said. 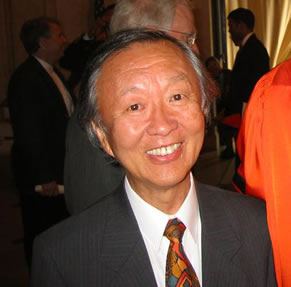 Exactly 100 years after Guglielmo Marconi won the Nobel Prize for Physics for his work on wireless telegraphy in the UK, Academy Fellow Professor Charles Kao CBE has been declared a Nobel Prize winner for his pioneering work in proving the viability of data-carrying optical fibres, also
researched in Britain.

In October 2009, the Swedish Academy of Sciences awarded Professor Kao the Nobel Prize in Physics “for groundbreaking achievements concerning the transmission of light in fibres for optical communication”.

Forty years ago, Professor Kao and his colleague George Hockham FREng published research that demonstrated hair-thin glass fibres could be engineered to carry digital information. Their work paved the way for the global digital revolution, including cable TV, direct dialling, and, most significantly, the internet.

Kao and Hockham managed to prove that losses in glass fibres were not a result of the technology being inherently flawed but due to glass manufacturing processes being unable make a fibre pure enough to sustain the transmitted light over a long distance.

In 1971, US company Corning Glass Works managed to produce a 1 km long glass fibre with the properties needed to carry light with sufficient efficiency.

Kao and his team at Standard Telecommunications Limited (STL) in Harlow were able to establish the first trial fibre links in 1977, with a cable laid from Hitchin to Stevenage. The cable used two electric signal amplifiers to boost the transfer. That process is now entirely optical and enables 95% of light to be retained after travelling a full kilometre.

The first transatlantic optical cable link was laid in 1988, with 6,000 km laid between the US and Europe. Today, a communications network spans the world using cables that stretch for a total of one billion kilometres.

Professor Kao studied for his first degree at Woolwich Polytechnic, now Greenwich University, and was awarded his PhD by the University of London.

The announcement from the Royal Swedish Academy of Sciences can be read at nobelprize.org/nobel_prizes/physics/laureates/2009/press.html

Professor Kao’s original paper on optical fibres can be found at http://tiny.cc/C8fSB 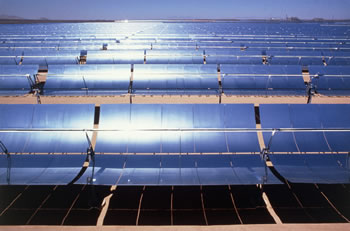 A new fund has been established by energy group E.ON that will drive research into new ways of storing energy from solar power that could play an important role in future large-scale electricity generation. The power and gas group has launched a €6 million fund which is seeking research proposals based on the
technology topic of heat storage for concentrating solar power (CSP).

Associated projects will investigate how best to store thermal energy captured from the sun’s rays, which are as yet largely untapped in many regions of the world. In solar-thermal power stations, CSP collects the rays to heat a fluid or solid material which provides energy for steam generators to produce electricity, while creating virtually no CO₂.

Crucially, the storage capability of CSP can support security of supply. Stored energy can provide power around the clock, including during darkness, overcoming the intermittency in forms of renewable energy which rely on the presence of sun or wind.

This is the third call in E.ON’s 10-year International Research Initiative which is providing €60 million to accelerate development of technologies with the strongest prospects of delivering sustainable, economic and practical energy for the future. Ten projects are under way in the first research topic, which is investigating energy storage to expand the contribution of renewable power. Among the funding recipients are the University of Strathclyde and the University of Nottingham.

The second research call focused on the application of nanotechnology in the energy industry, examining how molecular-scale innovation can improve energy production, conversion and storage. Participants include the University of Bristol and the University of Surrey.

Full details of the grant application process can be found at www.eon.com/research_initiative 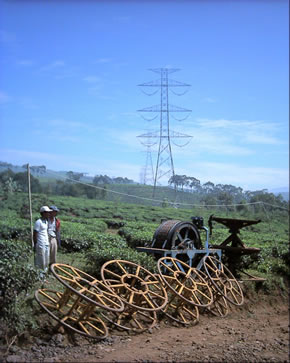 Workers on a 300 km overhead power transmission line project in Indonesia. It was built by Balfour Beatty who were advised on the management of social issues by Engineers Against Poverty © Andy Tanner

International development charity Engineers Against Poverty (EAP) is now in its 11th year of operation and continues to provide infrastructure and engineering expertise to some of the world’s poorest countries. It was founded in 1998 by The Royal Academy of Engineering, the Department for International Development, and the UK’s engineering institutions. Its remit is to work with industry, Government, and civil society to fight poverty and promote sustainable development.

To this end, EAP benefits from the continued support of the engineering institutions and from major engineering companies, including AMEC, Balfour Beatty and Arup. Concentrating on three key areas – infrastructure, extractive industries (oil, gas, and mining), and engineering education – EAP looks to introduce sustainable solutions in developing countries and engage the private sector in relieving poverty.

Along with the UK’s Department for International Development, EAP is implementing a project to improve occupational health and safety practices in the Tanzanian construction industry. The scheme has already successfully trained a core group of men and women in safe working on construction sites. They will then train their co-workers and employees to improve standards across the country.

Elsewhere, EAP is a principal advisor on a new initiative from the Department for International Development that aims to reduce the estimated $400 billion lost worldwide through corruption in the construction industry each year. In 2009, EAP, along with Arup, successfully launched ASPIRE, a new software-based framework for appraising infrastructure developments, examining them for social, environmental, economic, and institutional sustainability.

As a registered charity, EAP aims to raise money for its projects wherever possible – through donations and sponsorship. A recent fundraising trip saw employees of Arup, AMEC, MWH, the Institution of Civil Engineers, and Coventry University climb Mount Kilimanjaro, which raised £25,000 for EAP.

The next big fundraising trip will take place in South-east Asia and will see participants embark on a 525 km bicycle ride through two countries in February 2010. Over eight days, participants will ride from Ho Chi Minh City in Vietnam to the temples of Angkor Wat in Cambodia, riding through the waterways of the Mekong Delta. Each cyclist is required to raise £3,000 for the trip.

Cuong believes the trip is a worthwhile challenge: “It’s going to be tough – I’m in training now and the trip is still a few months away – I’m looking forward to an amazing experience. Not only that, but it will also raise essential money for Engineers Against Poverty, which will directly help people in poorer countries. I’m extremely proud to be taking part.” The Academy team is currently raising money for the trip. If you would like to find out more or make a donation, visit
www.raeng.org.uk/cyclechallenge 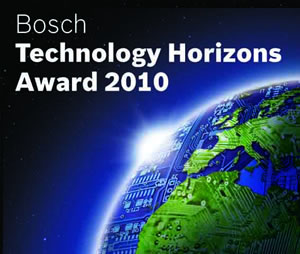 The Royal Academy of Engineering is once again supporting the Bosch Technology Horizons Award, an essay competition open to all young people aged between 14 and 24. Now in its fifth year, one of the main aims of the competition is to raise the profile of engineering and technology among youngsters by asking them to discuss engineering and its contribution to society.

The 2010 competition was launched on 2 November and entrants have been asked to write a short essay on whether they think engineering and technology are essential for future development.

The competition has two age categories: 14 to 18 and 19 to 24 years. The winner from the younger age group will receive £700 while the winner of the older category will receive £1,000.

Six other essays are shortlisted in each category – attracting smaller cash prizes – and each finalist is invited, along with their parents and teachers, to attend a presentation day in July 2010 at the Academy’s headquarters, where they will meet high profile representatives from the world of science and engineering. Previous engineering celebrities include world land speed record holder Andy Green, former land speed record holder Richard Noble, ICE President Gordon Masterton OBE, and TV presenter Johnny Ball.

The competition reflects Bosch’s commitment to innovation. Speaking about the competition, the President of Bosch in the UK, Dr Peter Fouquet, emphasised that: “To keep moving forward we need to unearth the young innovators of tomorrow.”

The deadline to enter the competition is 22 March 2010 and further information, along with resources for teachers, can be found at: http://tiny.cc/Q7QZV

A UNIFIED VOICE FOR UK ENGINEERING 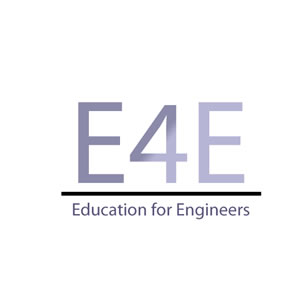 A new engineering organisation has been established that will, for the first time, create a unified voice for UK engineering to advise Government.

The organisation, known as Education for Engineering (E4E), is hosted by The Royal Academy of Engineering. It speaks on behalf of 40 bodies drawn from the Professional Engineering Institutions, including Engineering UK (formerly the Engineering and Technology Board), the Engineering Council (formerly ECUK), and the Academy, providing clear and coordinated advice on matters relating to engineering education to the Government and devolved National Assemblies.

To support existing policies for the promotion of careers in science, technology, engineering and mathematics (STEM) and for STEM teaching in schools, E4E will gather opinion from across the breadth of the engineering community and condense it into coherent advice.

The organisation is currently persuading Government to provide a clearer picture of the number of students undertaking engineering courses in further education – those who will become a substantial proportion of the engineering workforce.

It will help shape education policy by initiating and contributing to policy debates; providing decision-makers with high-quality information and analysis; highlighting the needs of future engineers; and revealing routes into engineering that are open to all.

Chair of the E4E Policy Group, Dick Olver FREng, believes the new organisation will do for engineering what SCORE and ACME are doing for science and mathematics respectively. “E4E is addressing a critical area that will support future economic development,” he says. “Unless the UK is able to educate, train, attract and retain good engineers at every level, our innovation skills will falter and opportunities will be lost.”

To cope with increasing traffic and bigger ships, the Panama Canal is building an additional channel with the world’s largest locks.

The Duke of Edinburgh writes about the promotion of engineering and importance of encouraging and developing future engineers.