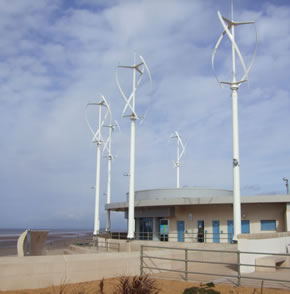 The effectiveness of traditional wind turbines declines when they are situated close to structures. The turbulence and inconsistent wind-flows created by buildings can seriously reduce their efficiency. A new vertical-axis wind turbine is beginning to appear on and near buildings around the UK that takes into account the engineering challenges presented by complex wind patterns.

Unlike the thousands of conventional horizontal-axis wind turbines already in existence, quietrevolution – or QR – exploits significant aerodynamic advantages inherent in a vertical axis layout. This has enabled engineers to reduce the turbine’s noise and vibration to ultra-low levels, while the unique helical design of the QR turbine not only captures turbulent airflow but also creates a dynamic and highly attractive visual effect.

Stephen Crosher, acting commercial director of QR, says: “Aeronautical engineers have a saying that ‘if it looks good, it usually works well’. The visual appeal of our turbine is a fortunate but incidental result of our engineering approach. We use three blades of variable section, each sweeping through 120 degrees, to ensure the turbine delivers constant, smooth power with virtually no vibration, from whichever direction the wind comes. This approach gives us clear advantages over conventional wind turbines, which are often unwelcome urban neighbours because of their visual impact, noise and vibration.”

Real wind modelling shows that QR has the potential to produce between 20% and 40% more energy than a conventional horizontal-axis turbine in a typical location near buildings, where the wind is significantly more turbulent than at exposed locations. Traditional turbines lose efficiency because as the wind changes direction they must slow down, re-orientate and then speed up again. If the wind changes direction frequently there will be a considerable loss of energy from a traditional turbine. Energy output from the QR5, the current turbine production model, is normally between 4,000 and 8,000 kilowatt-hours per year on a typical site (5.5 m/s to 7.5 m/s annual mean wind speed).

Conventional turbines also have a problem termed ‘vortex-shedding’, in which pockets of fast-spinning air detach from the blade and can create considerable noise. In the QR turbine, the tapered tips of its blades pass through the air more slowly than the rest of the blade and produce minimal noise. QR’s vertical design removes the need for a gearbox, saving energy and further reducing noise. An additional bonus is that this turbine does not need to turn to face the wind head-on when wind direction changes.

At 5 m high and 3.1 m in diameter, the turbine of the QR5 can be integrated among existing masts and buildings. Indeed, it has already been installed on several pre-existing sites around the UK. Its mast contains a peak-power tracking system that constantly optimises the turbine’s output for all sites and at all wind speeds within its 4.5 m/s to 16 m/s operating range (the Beaufort Scale equivalents of ‘gentle breeze’ up to ‘near gale’). Above 16m/s the turbine shuts down automatically to ensure safety.

Simplicity of construction confers the obvious benefits of streamlined design. With just one moving part, maintenance can be limited to a single annual inspection with minimal down-time.

Designed for an operational life of 25 years, the QR5 is winning business from major commercial companies, developers of residential buildings, Government departments, schools and universities. The bigger QR12 is set to generate between 45,000 and 55,000 kWh when it enters service in 2012, economically harnessing wind power for large-scale buildings.

The Duke of Edinburgh writes about the promotion of engineering and importance of encouraging and developing future engineers.

An exploration of the ways in which the Earth’s climate can be manipulated to counteract the effects of global warming.