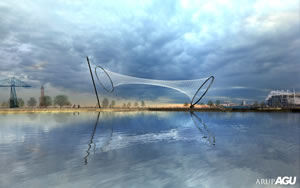 A visualisation of the completed Temenos structure at Middlehaven

Temenos is a massive sculpture created by internationally acclaimed artist Anish Kapoor and structural designer and Arup Fellow, Cecil Balmond. The first of five proposed ‘Tees Valley Giants’, the structure reflects the region’s strong engineering pedigree. The project engineers and original design team talked to Ingenia ahead of the structure’s completion in the spring of 2010.

Three times taller than another north-east icon – Gateshead’s Angel of the North – Temenos is the first of five imposing works of art that, over the next decade, will be designed and built as centrepieces of major regeneration projects in each of Tees Valley’s five boroughs. These ‘Tees Valley Giants’ will serve as symbolic centrepieces for the regeneration projects, which constitute the biggest urban programme of its kind in the UK.

Middlesbrough’s core Tees Valley Regeneration project focuses on Middlehaven Dock, which is witnessing a transformation with new commercial, business and residential properties, including a city college and associated infrastructure. Together, the ‘giants’ represent the world’s biggest public art initiative at around £15 million.

As an individual sculpture, Temenos is remarkable both in its physical scale and in the region’s ambition to make it a reality through a broad spread of funding supporters, including the local regional development agency, Arts Council England, the Northern Rock Foundation and Middlesbrough Football Club.

Temenos can claim to be the first landscape artwork in the UK in which artist and engineer share equal billing. Anish Kapoor is a Royal Academician, winner of the Venice Biennale in 1990 and the Turner Prize in 1991. During a long and distinguished career he has exhibited at many of the top art venues and has been a pioneer of large public sculptures. Before Temenos, he received great acclaim for works such as Cloud Gate in Chicago and Sky Mirror in New York.

Cecil Balmond is deputy chairman of Ove Arup and Partners, for whom he directs the company’s Advanced Geometry Unit, a research and experimental arm that he established in 2000. In this capacity, and as an Arup Fellow, he has collaborated with many world-leading architects on some of the most ambitious projects, including the Portuguese National Pavilion in Lisbon for Expo ‘98 and London’s Serpentine Pavilion. He previously collaborated with Anish Kapoor on the Marsyas installation in the Tate Modern’s Turbine Hall in 2002.

The two men acknowledge equal credit for Temenos (meaning ‘sacred space’ in Greek) and the creation marks a genuine amalgam of the skills of the artist and structural engineer. Temenos has been described during its construction as a ‘giant stretched stocking’, and a ‘trawler net in the sky.’ Anish Kapoor says that it reminds him of a ‘juggling act’ where rings have been thrown up and hover in mid air. The structural engineering ensures the rings will, in fact, be anchored by cables and guys, with these solid forms linked together by a more flexible cable net.

Temenos is over 48 m high and approaching 120 m long, straddling the north-eastern corner of Middlehaven Dock. The new sculpture will incorporate a central cable net of variable circumference, attached to a circular ring at one end, and an elliptical ring at the other, which itself is tethered to a giant canted mast.

The whole structure, sitting on reinforced concrete piles to a depth of 24 m, weighs 180tonnes. Around 58 tonnes is accounted for by the 32 m diameter circular ring, which sits on a concrete plinth and is tied back to the ground. Its elliptical counter is 28 m by 16 m, and is suspended from the 46 m long steel mast. This is tethered back to ground level by stainless steel cables after precision assembly and careful positioning of the cable net.

Around five miles of steel cabling has been supplied, mostly for the 100-plus lengths comprising the cable net – secured in position by more than 3,000 individually machined cable clamps to achieve the geometrically complex and striking shape of the net.

When Arup’s Advanced Geometry Unit were working up the design specifications for constructing Temenos, they tested the exact shape of the net by using a process known as ‘dynamic relaxation’ in design software. The cables were treated as a network of simple one-dimensional elements with a node at each connection point. During the relaxation process, the tension in each cable was calculated and the nodes moved according to the resultant force at each location. The resulting movement caused the lengths and thus the tension forces of the connected cables to change. The process was then repeated using the new values.

After thousands of iterations were analysed by the design software programs, the cable net settled into a stable form where, at each node point, the opposing tensions in all directions were equal. By altering the amount of pre-tension in different parts of the net, it was possible to tailor the final shape of the sculpture and obtain precise values for the cable lengths and stresses they would need to endure. This is especially important with Temenos, as the smaller ring hangs in mid-air supported only by the tension in the cables.

Using these results, the necessary cable thicknesses could be selected. The majority of the net consists of 10 mm- diameter stainless steel cable, whereas the longitudinal cables along the top of the sculpture – which support the rest of the net – have an increased diameter of 16 mm.

Arup also asked wind and weather experts to consider the long-term climatic implications for Temenos. The structure lies across a prevailing wind in an exposed location and the column struts used to support it would have potentially vibrated in the wind. These, therefore, needed to be specially shaped because of vortex-shedding vibration. It was also estimated that in bad winters there could be an ice build-up of up to 130 mm in diameter on the structure, which would make a huge difference in the load distribution; flexibility had to be built into the cable netting of the structure.

The project initially envisaged the entire erection sequence being undertaken on the ground, which would be safer, quicker and more comfortable for assembly personnel. But, following detailed studies of the erection methodology, it was determined that only about 75% of the task could be done at ground level because of lateral loads on the crane, and that a key remaining element of the assembly would have to be done aerially, calling for further specialist workers.

The non-linear analysis produced a schedule for each individual cable, where the intersection points needed to be, and the angles involved to determine which clamps to use. The analysis also fundamentally assisted in reverse engineering the sequence, back from the finished article, to generate an erection methodology that would dictate the extent of temporary works required during the construction.

The circular ring was then lifted into place and propped temporarily to counteract the absence of tension from the cable net and rotated two metres forward of its final position. Its stay cables (two sets of double 32 mm diameter cable) were attached at that point and extended to allow the ring to move when it was transferred into its final position under tension.

On the other side of the dock, the mast was lifted into position and propped, and the elliptical ring was lifted onto a temporary cradle at ground level but canted backwards into its final orientation, as if lowered with the stay cables.

At the time of writing, the net’s longitudinal cables are due to be pulled into position and attached individually to the elliptical ring in an arranged clockwise and anticlockwise sequence, so that opposite cables were attached in a uniform and balanced manner.

With all the longitudinal cables attached to both rings, the partially connected hoop cables will complete their full traverse around all longitudinal cables, each again being clamped in a set sequence, which will draw the cables together and establish the final form of the cable net.

With the net ready to be lifted into its final position, the construction will be completed by a winch system at ground level and pulley at the top of the mast, also connected to the elliptical ring. As the tension is taken up in the winch, the temporary props will be released, allowing the ring to be hoisted into its final position, with the upper stay cables attached and tension taken up in the lower cables. The winch will then be released and the temporary brackets and clamps removed.

On the other side of the dock, the tension in the stays of the circular ring will be taken up, allowing those props to be released, followed by the removal of the props to the mast, effectively allowing the structure to find its own shape, though still controlled by the length of the cables.

The final manoeuvre will shorten the lengthened stay cables to the circular ring, rotating the ring back through two metres, thereby fully tensioning all the cables to leave the entire structure in self-sustaining tension.

During the next decade, Temenos and four other monumental pieces of art will be constructed as the centrepieces of regeneration projects planned for each of the region’s five boroughs: Middlesbrough, Stockton, Hartlepool, Darlington, and Redcar and Cleveland.

As well as demonstrating the cultural awareness of the region, it is hoped each giant will create a fresh and dynamic image around which its associated regeneration can be built. The Tees Valley Regeneration Project intends to show the pride people have in living and doing business there.

The Temenos sculpture will transform Middlesbrough’s skyline. It is hoped that the regeneration plans for the area will also receive a boost on its completion. The artwork will certainly generate both publicity and visitors. The consequent momentum could lead to further work, homes and construction work in the area.

To follow the progress of the construction of Temenos go to www.teesvalleyregeneration.co.uk

Gary Atkins, a freelance writer, helped Ingenia with the compiling of this article.

Adapting infrastructure to a changing climate

The threat of more frequent and damaging natural disasters means the UK needs to adapt its national infrastructure.

Following its 25th anniversary, how the Women into Science and Engineering campaign has helped introduce greater numbers of women into the profession and why the industry still needs more.

A Forum for Engineering

The public launch of the Academy’s making things better campaign will fund a further transformation of Carlton House Terrace into a Forum for Engineering.