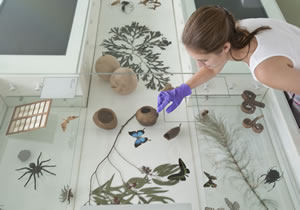 The new Darwin Centre at the Natural History Museum houses the institution’s 400-year-old, 20-million strong collection of plant and insect specimens. The sustainable building also accommodates working laboratories in which the public can view the museums’ 220 researchers at work.

Opened in September 2009, the building – the largest curved, sprayed concrete structure in Europe – has specific operating requirements. Services consultant Fulcrum, now part of the Mott MacDonald Group, carried out the design of a bespoke lowcarbon ventilation and climate control system to preserve one of the world’s largest and most important collections.

Darwin’s Cocoon, so called because the building is shaped and textured like an insect’s cocoon, maintains a constant internal temperature of 17 °C. The humidity is fixed at 45%. At those levels, the environment is not too cold for technicians to work for brief periods but cold enough to counter a serious threat to natural history collections: the museum beetle. Feeding on dead organic matter, in warm and humid conditions the beetles can cause huge damage to preserved specimens. The lower temperature prevents the insects from reaching sexual maturity.

Purpose-built air handling units can recycle up to 75% of needed temperature and moisture from exhaust air back into the supply air in winter. The humidity of supply air is controlled using a highly efficient adiabatic process – where no energy is utilised. During summer, waste heat from the Natural History Museum estate’s central combined heat and power plant dries supply air while the estate’s absorption chillers are used to lower its temperature. With the concrete walls and floors of the cocoon itself acting as a stabilising thermal mass, the collection will remain at a suitable temperature for many hours, even with the ventilation systems switched off. Fulcrum also worked to lower energy consumption through the Darwin Centre’s internal lighting. In laboratories, artificial lighting automatically adjusts according to how brightly the sun is shining and, in storage areas, lights are activated by movement sensors.
For more on Mott MacDonald Fulcrum’s low energy visit www.fulcrumfirst.com or www.nhm.ac.uk 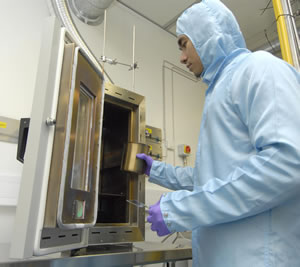 The Optoelectronics Research Centre (ORC) at the University of Southampton is to benefit from a £70 million Government investment in a national network of advanced manufacturing research centres.

The Prime Minister and Business, Innovation, and Skills Secretary Lord Mandelson announced the new centres, which will be managed by the Engineering and Physical Sciences Research Council (EPSRC), in January 2010 as part of a plan to help develop future technologies and stimulate growth in the UK’s manufacturing sector.

Southampton’s ORC, the site of the new EPSRC Centre for Innovative Manufacturing in Photonics, is already a worldleading institute for photonics research. It produced the world’s first optical amplifier, making long-distance optical communications a practical reality, and files over 20 patents a year.

The new centre will work with industry partners to develop advanced optical fibres and train a new generation of optical engineers. Southampton and the other two new manufacturing research centres at Loughborough and Brunel universities will help UK businesses, particularly small and medium-sized businesses, develop and launch new and cost-effective manufacturing processes. Companies will be able to use the centre’s state of the art equipment and expert technicians to help them develop and test new technologies. Thirteen industrial partners will be involved at the initial stage.

To ensure that the UK economy benefits over the longterm, the centre will use the innovations it generates itself to form spin-off companies and joint ventures, something of which the ORC has significant experience: 10 companies in Southampton are already commercialising aspects of its research. Graduate training programmes and industrial secondments will help disseminate knowledge throughout industry.

The establishment of the Centre for Innovative Manufacturing in Photonics is the latest step in 40 years of world leading photonics research at the University of Southampton, and will help push research into areas including optical nanowires, visible laser technologies for high-definition media, and the use of optical fibres to view living cells. 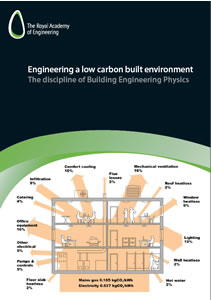 In order to achieve the UK’s carbon reduction targets, the nation must embrace building sciences and design structures that are far less dependent on fossil fuels, according to a new report published by The Royal Academy of Engineering.

Carbon emissions, according to Government targets, must be reduced by 80% of 1990 levels by 2050. Buildings presently account for 45% of carbon emissions and it has been estimated that 80% of buildings in the UK that will be in use in 2050 have already been built. Unless wide-ranging changes in building design are instigated, the report warns, these targets will not be met.

To deal with the potential problem, the Academy’s report recommends a radical overhaul of education and practice in the construction industry. It calls on Government to deliver a considerable increase in building engineering physics professionals. Government should also, the report says, establish a benchmark for practice in the construction industry by setting and enforcing carbon performance targets linked to financial outcomes.

Engineers must be prepared to adapt to the new low-carbon construction culture. The report calls on engineering institutions to recognise and impart the importance of a multi-disciplinary, problemsolving and systemic approach to construction. Government, academia, and the engineering institutions should work together to create new centres in universities and introduce new funding mechanisms to support research into building energy performance.

Michael Dickson FREng, Chairman of the Happold Trust, which supported the report, said: “Under the guidance of the Academy, Professor Doug King has delivered a significant report on the teaching of building physics to the engineers of tomorrow and which will help to achieve the low-carbon world that we seek for the future.”

The report is available at www.raeng.org.uk/built_environment

The Appliance of Science

The winner of the 2009 Sir Frank Whittle Medal talked about the commercialisation of engineering research, at the Academy’s New Year Lecture.

Engineering the future is an alliance of professional engineering organisations with a combined membership of 450,000 engineers.

Tees Valley becomes home to one of the UK’s biggest public works of art, designed by the artist Anish Kapoor and structural engineer Cecil Balmond