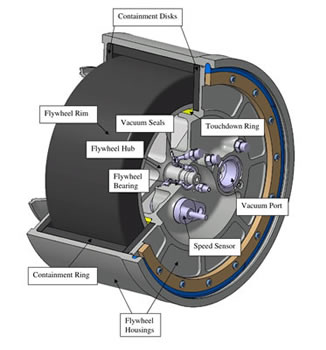 Despite their eco-friendly credentials and lower fuel costs, electric hybrid cars have not entered the mass-market as expected. Much of this is down to the high price of the batteries, according to British company Flybrid Systems, winner of the British Engineering Excellence award in 2009. They have developed a mechanical solution to fuel-efficient hybrid cars.

The concept for the Flybrid flywheel Kinetic Energy Recovery System (KERS) was originally developed by Jon Hilton and his team when he was technical director of the engine division at Renault F1 in 2006. It is now being brought to market by Silverstone based Flybrid Systems.

Formula One regulations have ruled out KERS being used in the 2010 season but it looks likely to return in subsequent seasons. A partnership with carmaker Jaguar means it could be on the road as early as 2013.

“Flywheel energy storage in transport has been around since the 1950s, so the idea isn’t new. What we’ve done at Flybrid Systems is make the technology much smaller by making the flywheel rotate much faster,” says Flybrid’s Managing Partner, Jon Hilton.

So fast, in fact, that the surface of the flywheel can reach Mach 2 and has to be sealed in a vacuum. Flybrid is able to recover up to 600 kJ of kinetic energy normally lost during vehicle braking, store that energy in the spinning flywheel, and release it to improve engine power and reduce fuel consumption. By upping the speed to 64,500 rpm (by comparison, a typical regenerative braking flywheel in a train rotates at 2,500 rpm) the flywheel can be smaller and lightweight but the high speed would have the effect of producing intense heat and friction with the surrounding air. The solution was to contain the flywheel in an airtight casing and operate it in a vacuum, using a patented seal to allow power to get in and out without air leaking in.

Power is transferred via a continuously variable transmission, controlled by an onboard computer. Like an electric/internal combustion hybrid engine, the Flybrid system will optimise itself for different kinds of driving, aiming to minimise fuel consumption and improve performance. For example, the algorithms that operate the onboard computer will adapt the system to get the best performance in country driving where there is no traffic and then convert to more fuel efficient running for gentler urban driving.

“Flybrid’s mechanical solution has several advantages over an electric hybrid,” says Jon Hilton. “It’s more efficient at recovering energy – 70%, as opposed to 40%. And the device is small and lightweight compared to electric solutions – it’s less than half the weight.”

The key to its expected commercial success, he insists, is cost. Electric hybrid cars are still very expensive – prices start at around £17,000 for an entry-level model. The Flybrid system costs around a third of the equivalent electric systems opening up a market for low cost hybrid cars.

Working with a consortium of UK companies including Jaguar and Ford, and using £3.3 million funding from the Technology Strategy Board, Flybrid Systems is developing a system for road cars that it expects to release in 2013. Designed to last 250,000 km, the flywheel hybrid system for road cars is expected to offer 20% CO2 fuel savings under New European Driving Cycle test conditions, and up to 30% in real-world conditions.

Following its 25th anniversary, how the Women into Science and Engineering campaign has helped introduce greater numbers of women into the profession and why the industry still needs more.

Representatives from the three main political parties outline their views on the importance of engineering and engineers in the UK.

Tees Valley becomes home to one of the UK’s biggest public works of art, designed by the artist Anish Kapoor and structural engineer Cecil Balmond