The Appliance of Science

Sir Michael Brady FREng, BP Professor of Engineering at Oxford University, has fundamentally improved the quality of healthcare in the UK and around the world through a series of companies marketing innovative cancer imaging technologies. He spoke to a gathering of Fellows on the methods and challenges of turning academic research into commercial engineering at the New Year Lecture in January 2010. 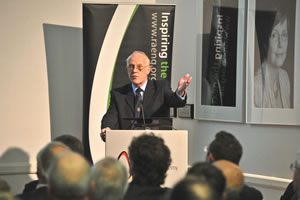 Most academic research culminates in a report or a study. Engineering, on the other hand, can only be complete when it finds physical application as a real product or structure. This is the guiding principle that has driven Professor Sir Michael Brady throughout his career. How he has applied this was the basis of a talk delivered to an audience of Fellows and their guests at the Academy’s New Year Reception in January 2010.

Professor Michael Brady began his engineering career as Senior Research Scientist at the Artificial Intelligence Laboratory at Massachusetts Institute of Technology (MIT) in 1980. He helped to found MIT’s
world-famous robots laboratory before moving to Oxford University in 1985 to take up the newly established Chair in Information Engineering.

Professor Brady and his colleagues established Oxford’s Robotics Research Laboratory, where he developed innovations such as collision-avoidance in robots. This led to one of the professor’s first forays into commercialising research: he and several colleagues founded Guidance Ltd in1991, which now has a significant share of the global market for dynamic ship positioning and has just been awarded a contract to supply GPS-based offender tagging for the whole of France.

In 1995, his career took a sharp turn. Driven by the death of his mother-in-law from breast cancer, Professor Michael Brady’s research interests moved towards medical imaging, specifically mammography.

“I was appalled at the lack of information available to radiologists,” he said. “Cancer imaging was nowhere near good enough. Around 20% of cancers were missed at screening – and 80% of biopsies were unnecessary. That’s still true today”

Inspired to transform cancer analysis and medical imaging, Professor Michael Brady began to look into ways of improving the hardware and software used in imaging technologies. Over the course of eight years, he developed technologies to fuse different methods of imaging anatomy, such as Computerised Axial Tomography (CAT) or Positron Emission Tomography (PET) scanning.

In 1998, Professor Michael Brady founded another company to market two technologies developed by his team, one of which, Fusion7D (which subsequently was developed and marketed as MiraView, then Siemens’ TrueD and then Mirada Medical’s XD3) enabled software fusion of the information in different images such as CAT or PET.

The second development, Volpara is set to break further ground by analysing the density of breast tissue, a key risk factor for breast cancer. It is expected to acquire approval from the US Food and Drugs Administration this year.

Professor Sir Michael Brady had some advice for anyone looking to commercialise their research. He says that there are many ways to fail in business and he has experienced nearly all of them. Two of the most prominent ways for academics to fail when commercialising their research is a failure to listen to customers and an aversion to risk-taking.

Elaborating further, Brady stressed the difficulty of growing start-up companies in the UK, particularly in healthcare. Some of this is because of the nature of the NHS and its regulatory framework. Another important part of the problem he feels is the “minuscule” amount of Government support for start-ups.

“We [in the UK] think it’s almost shameful for the Government to invest in small companies,” he said. “There are some organisations, like the EPSRC [Engineering and Physical Sciences Research Council] that do more, but it’s too little and comes too late in the process.”

“I actually think that the Academy has, potentially, a fantastic role to play in supporting and stimulating and giving mentoring to small companies.”

Before the lecture, Academy President Lord Browne presented Professor Michael Brady with the Sir Frank Whittle Medal for his outstanding contribution to healthcare engineering in the UK and around the world. The medal is given annually to engineers who have contributed to the improved wellbeing of the nation. Past winners have included Sir Tim Berners-Lee FREng FRS, for helping to create the world wide web, and Professor Ian Young OBE FREng FRS, for pioneering magnetic resonance imaging.

See a video recording of this lecture at: www.raeng.tv

Affordable hybrid cars could soon be on the market thanks to a new kind of mechanical energy storage device.

Engineering the future is an alliance of professional engineering organisations with a combined membership of 450,000 engineers.