The challenges facing the widespread adoption of electric cars 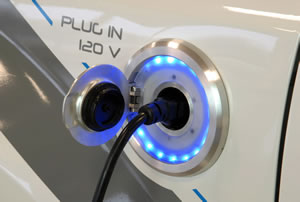 The plug in attachment for the Ford Escape hybrid. The car can switch automatically between electric power, petrol engine power or a combination operating together. In addition, when braking or decelerating, the Escape’s hybrid system uses regenerative braking, where the electric drive motor becomes a generator, converting the vehicle’s momentum back to electricity for storage in the batteries © Ford Motor Company

Electric cars offer a route to maintaining the mobility society takes for granted while drastically reducing carbon dioxide emissions. Their development, however, has many obstacles to overcome. Professor Roger Kemp FREng chaired an Academy working group that delivered its report on electric vehicles in May 2010. He gives an overview on the options for electrified personal transport in the 21st century and the engineering and policy challenges posed.

In the UK, transport is responsible for almost a third of carbon dioxide emissions – with tailpipe emissions accounting for 25% and embedded energy and international transport making up the remainder. Importantly, emissions from the huge numbers of cars on the road dominate these statistics so finding an alternative to petrol and diesel to fuel the private car is critical.

Until recently, hopes were high that biofuels would be able to ‘solve’ emissions issues without significant changes to car technology. The 2008 Gallagher Review of the indirect effects of biofuels production changed this view. Issued by the UK’s independent sustainable fuels regulator, the Renewable Fuels Agency, the report showed that with present technology, biofuels simply cannot be produced sustainably to meet the fuel levels required by UK transport – though they could have a role in blended fuel for PHEVs.

Since the 1980s, there has been a revolution in battery technology led by the mobile phone and laptop markets. Today’s rechargeable, lightweight nickel-metal hydride and lithium ion batteries carry much more power than their heavy lead acid predecessor. Secondly, drive system design has leapt forward with software-controlled three-phase drives enabling the use of cheaper and more reliable AC motors. High performance rare earth magnets have also led to smaller motors and a more flexible vehicle layout.

These breakthroughs twinned with Government incentives worldwide mean car manufacturers are now developing electric cars. Ford, for example, has joined forces with Scottish and Southern Energy to develop an electric Focus while Citroën has developed the C1 electric. Toyota has a major programme of electric and hybrid vehicles and TATA, Peugeot and Renault are all introducing prototype fleets of electric cars.

With the exception of a few high-performance, expensive cars, almost all vehicles are designed for limited mileage urban use. Despite the large strides forward in developing battery technology, today’s practical and affordable options still only give electric vehicles a range of around 100miles – relegating them to second car status in a multi-car household.

Clearly a few million electric vehicles kept as second cars for shopping or the school run will have a negligible effect on overall transport emissions. To make a significant impact, electric vehicles must appeal to mainstream family car and company car owners, which means they need to travel further while competing economically with petrol and diesel models. If higher energy density batteries that provide a greater range are too expensive, one option is to build and infrastructure that allows drivers to replace or recharge their batteries while travelling.

Battery exchange schemes have been suggested but are loaded with potential issues including how the system would cope with different sized batteries from different types of vehicle and where the capital expenditure would come from to provide a nationwide infrastructure.

The alternative option is to recharge batteries en route to destinations, which could take place at a converted petrol station that houses fast recharge points. However, even if the battery chemistry were to allow fast charging, the high-current connections would not be user-friendly and it would be challenging to design an interface capable of working with different sizes and types of battery.

More importantly, the load on local power supplies could be huge and could be taken at peak times. If, for example, a typical suburban filling station, with a dozen fuel pumps, were converted to a fast recharge facility, the load on the local power supply could be as high as 5 MW, equivalent to the power drawn from the electricity network by some 2,000 homes.

Charging at home, preferably at night during off-peak hours, is an option, but what of the millions of people who have to park their cars on public roads? Assuming that on-street residential parking could be divided into marked bays, a key challenge would then be to install vandal-resistant charging points that incorporate a smart card reader, socket outlet with electrical protection and a data link back to a central system capable of validating the smart card and then switching on the power. Providing charging points, be it for out-of-town charging parks or on-street residential parking, would cost hundreds of millions of pounds.

Given the potential cost and infrastructure issues associated with electric cars, the plug-in hybrid electric vehicle (PHEV) provides an appealing alternative. Such a car contains a battery and an internal combustion engine so if charging points existed they could be used. If none is available the car could run on petrol or diesel (see Plug-in hybrid options).

A PHEV would also provide a more affordable alternative to the electric car as the costs of a small battery and internal combustion engine would be lower than that of a battery fulfilling the full range of daily use. In the medium term, it would not be unreasonable to see the affordability of a PHEV rivalling that of the petrol or diesel saloon car. If most family or company cars were to be PHEVs, carbon dioxide emissions would be cut drastically.

Further development is likely to lead to higher capacity and cheaper batteries. Although a purely electric car is never likely to be suitable for a high-mileage holiday, an increasing proportion of motorists might find them adequate and, over time, an infrastructure would become established that would allow electric vehicles to take over from PHEVs in more and more applications.

Regardless of technology choice, any electric car or PHEV is only as ‘green’ as the electricity that charges its battery. Recent results from electric vehicle trials show carbon dioxide emissions to be around 100 g/km when the car is charged from a typical power supply.

Given that a new Volkswagen Polo turbo diesel injection produces emissions of 91 g/km, it is difficult to see how electric vehicles fed from today’s UK electricity generation supply are significantly better than petrol or diesel vehicles. To have a major effect, the introduction of electric vehicles would need to be accompanied by an almost total ‘decarbonisation’ of the electricity supply, which is possible but difficult.

At present, the contribution of renewable and nuclear generation to the UK’s energy supply is one of the lowest in Europe (figure 1). If the UK is to meet its renewable targets, and ensure a greener power supply to electric cars, a range of new energy sources including new nuclear power stations, wind farms and tidal barrages will be needed. Many consider this huge feat of engineering to be highly challenging under the current industry structure.

Constructing new electricity generation is not the only challenge. Renewable energy is not readily controllable and the challenge for those supplying energy to a fleet of electric vehicles is to match their varying charging needs to a fluctuating and unpredictable power supply. In terms of annual energy consumption, the additional power requirements caused by a mass take-up of electric vehicles would be manageable, but supplying sufficient power at times of peak demand would be more difficult.

One solution would be an ‘intelligent’ electricity network or ‘smart grid’. In July 2009, the Department of Energy and Climate Change (DECC) outlined its proposal for a smarter grid that would “enable more dynamic real-time flows of information on the [electricity] network... [and] help deliver electricity more efficiently and reliably.”

The architecture of the smart grid needed to match large numbers of electric vehicle battery chargers with unpredictable renewable energy supplies bears little relationship to the smart metering infrastructure that is being planned today. Apart from the ability to broadcast signals to consumers indicating when surplus low carbon electricity is likely to be available, the smart grid will need to be able to negotiate between different users and micro-generators down to the level of a local substation. Without an optimised smart grid in place, the environmental case for electric car development is not proven.

Up until May 2010, the Labour Government had four programmes in place: low carbon energy, ‘Digital Britain’, smart grids and electric vehicles. The last programme only makes sense if the previous three are in place, and delivering all four will be more challenging than any other programme over the last century.

The demands on engineering and financial resources will be huge, significant social change will be essential and all of this has to take place quickly. While climate change will not wait for the world to develop a solution, electric and hybrid vehicles could be a part of the solution.