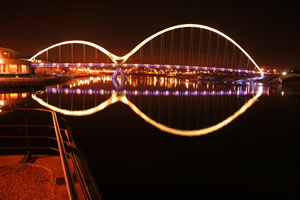 Stockton-on-Tees’ Infinity Footbridge opened to the public in 2009 as the centrepiece of the region’s regeneration. That same year, the Institution of Structural Engineers awarded the designers of the bridge, Expedition Engineering, its highest accolade, the Supreme Award for Structural Excellence. Professor Chris Wise FREng, Expedition’s director, and Tim Harris, an Associate at Expedition, talk about how this addition to the north-east landscape came to be.

In 2003, the Royal Institute of British Architects and English Partnerships ran a competition to design a new pedestrian bridge across the River Tees in Stockton. The crossing was to form part of the wider regeneration projects which encompassed a large part of the north-east of England, and specifically a swathe of post-industrial land in the centre of Stockton itself.

The competition called for something that would demonstrate the quality and innovation of the development and become a centrepiece of the area. It also called for a dramatic structure that would represent value for money and have a 120-year design life. A “Ford Mondeo…with alloy wheels” as a local resident put it.

Expedition Engineering and Spence Associates won the competition with an attention to detail that belies the minimalism inherent in the bridge. The site of the new bridge was more or less where Margaret Thatcher announced, in 1987, what was then the biggest urban regeneration programme in Europe.

The design of the Infinity Footbridge was guided by many considerations including the location of the central pier, maintenance problems experienced on local bridges and striking a balance between rigidity, cost, and thinness of form.

The design of the bridge also had to accommodate existing uses of the river. A 1,000-metre rowing course runs diagonally up the river on the proposed site of the bridge, making a symmetrical bridge with a single support out of the question because the pylon would have sat in the middle of the rowing lane. An alternative, crossing the river in a single span, was too costly. Expedition and Spence instead chose to place the foundation off-centre, a decision that led to the bridge’s unique design.

The key social factor that influenced the design was the fact that the bridge would connect existing walkways on either side of the river and would be the centre of a new pedestrian route from Stockton railway station to the regenerated area. That, and the need for a minimum deck level to allow water traffic underneath the bridge, meant that it had to have a longer span to allow a gradual rise and fall in height. Lifts, which would have allowed a shorter length, were dismissed because they would have broken the linearity of the path and increased construction and maintenance costs.

These constraints led to main spans of 60 m and 120 m, one of the longest spans for a pedestrian bridge in the UK. Starting out as a rough sketch made during a train journey back from the site, the bridge is an asymmetrical double tied-arch with one arch twice the height and length of the other. Between them sits a curved inverted ‘saddle’, which aesthetically maintains a sinuous flow to the arches and structurally reinforces them, making the ultra-light bridge much stronger, and less prone to wobble.

The asymmetrical shape of the bridge eventually led to its name. An entrant to a competition run by the Northern Echo newspaper noted that, when the water was calm its reflection formed a figure of eight or the infinity symbol on the horizon. It was then dubbed the ‘Infinity Footbridge’.

Arches work well under uniform loads as they stay in compression. However, when the loads are non-uniform, bending is introduced to the arch. In bridges that carry roads this isn’t too great a problem as the self-weight of the structure is much more than the loads of the vehicles moving across the bridge. The self-weight of a pedestrian bridge is much less than the moving loads – people – making the bending forces in an arch a problem.

Pedestrian bridges are often subject to changing forces because of the way people walk across them, and because pedestrians tend to group in non-uniform ways when they stand on them. To deal with this kind of loading, most bridges have bulk added to them to make them sturdier, which has the side-effect of making them ‘fatter’. The design principle for the Infinity Footbridge was for it to have a very thin profile and for this to happen, just like a musical instrument, it had to be incredibly well tuned.

Expedition decided to reduce the bending in the bow by including a back span. For one span to deflect down, the other must be lifted. The continuity across the central support means that each span provides stiffness to the other.

By using two tied arches, overlaid with the two-span beam principle, the Infinity Footbridge has managed to keep bending to a minimum and the section sizes as light as possible. For the arches to act together, like the two-span beam, they must have continuity over the central support. This is provided by the reflex curve.

The arch was fabricated by Cleveland Bridge from weathering steel. The arches themselves split either side of the deck below, which gives sideways stability. 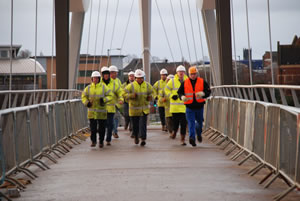 Over the river, the deck hangs from the arch on 30 mm diameter high-strength steel cables. There are 32 sections, each 7.5 m in length and 5 m wide. The deck itself is extremely light, lending further need for a rigid structure.

Made out of concrete to offer the bridge a ‘firmness’, the deck sections are nevertheless only 125 mm thick with 380 mm deep edge beams. The sections slot together and are held in compression along their length, adding to the bridge’s horizontal stiffness.

Balfour Beatty, the contractor, cast all of the deck sections onsite. Each section was cast in a single piece, with all fittings, channels and other features shaped into the moulds. These included drainage channels, spouts and gargoyles for water run-off, support for service ducts and fittings for the handrails.

The long edge of each section is aerodynamically shaped like an inverted aeroplane wing to prevent the deck ‘fluttering’ in high winds. On other bridges of a similar type, these ‘nosings’ and other fittings are often bolted onto the deck afterwards, which increases costs and maintenance. Balfour Beatty are now applying many of the concrete casting techniques it developed while working on the Infinity Footbridge to its other projects, such as the use of a wooden shed on wheels to form movable on-site prefabrication yards.

To prevent sway, the deck sections are pre-stressed on the outside to squeeze them together for horizontal stiffness, like squeezing together a stack of books and lifting them. The whole bridge is then in a natural balance, with the deck sections compressed together, tied into the arches. This then acts as a two-span continuous beam as well as two tied arches. Each of the segments of the bridge, deck, ties and arch, are interlocked.

Another notable aspect of the Infinity Footbridge is its lighting system designed by Speirs and Major. The initial plan was to have lights in the deck shining upwards and reflecting off the underside of the handrail but highways regulations dictated that such lighting levels would not be high enough. The solution was to place the lighting in the handrails to illuminate the length of walkway at the most advantageous level for pedestrians.

To minimise light pollution, the designers decided to install dynamic LEDs that change colour as pedestrians walk past sensors embedded in the handrail. The result is a low-level blue light that changes to white to better illuminate the deck, but then changes back to the softer blue. As pedestrians walk along the bridge, the lights form a ‘vapour trail’ that follows them along its length, becoming another feature of the structure.

To accentuate the unique form of the bridge at night, the arches are uplit from lights that hang out from the deck. White metal-halide up-lighters are attached to steel cable ties to illuminate the white painted bridge arches, and blue LED down-lighters illuminate the water and ground surfaces immediately below the deck. Again to reduce ‘overspill’ and light pollution, each light is directed to only focus on the arch itself, so instead of throwing a circular spotlight the bulbs are shaped like sausages that follow the thin lines of the arch.

For both social and environmental reasons, there was a keen desire to keep the work on the bridge as local as possible. This proved successful, with over 80% of the bridge built within 20 miles of the site. Almost all the work on the bridge, from the steelwork to the lighting, was carried out in the north-east of England. Balfour Beatty’s local office was in Newcastle, fabrication of the arch sections was carried out in nearby Darlington, and the welding, production of the stainless steel handrails, steel reinforcement, and the lighting, were all done by local subcontractors. Around 400 people worked in factories in the region to produce parts for the bridge.

Construction of the Infinity Footbridge began in June 2007 when the central pier was put in place. By June 2008, the first section of arch – made from two pieces welded together onsite – was in place. In September 2008, the largest section of arch, weighing 170 tonnes and measuring 90 m in length, was swung into place by the largest mobile crane in the UK.

Within 18 months of the start of construction, the bridge was ready for structural testing and final fitting. In May 2009, it was ready for its grand opening, having been completed on time and on budget.

On the opening night, 14 May 2009, thousands of Stockton residents walked along the banks of the Tees to see its unveiling. Two free-runners were hired to scale the arches 40 m above the river and, as the darkness dropped over the Cleveland Hills beyond, they held two red flares in the air as giant TV screens relayed their actions from cameras in their helmets. It was officially opened to the public two days later, on 16 May 2010.

The Infinity Footbridge, first and foremost, was built for and by the people of Stockton: it has already become an icon for the town. As a symbol of the region’s resurgence, the bridge links its steelworking past and its future, forming the centrepiece of modern residential development and growing academic base. It is expected that around 4,000 people a day will walk across it when the nearby University is expanded and people move into the surrounding development.

Over the course of its 120-year design life, it is hoped that the bridge will become a landmark for the area, as familiar as Gateshead’s ‘winking-eye’ bridge or the Angel of the North and mark the rejuvenation of a region that has been deprived for so long. The local people built the bridge and they will live with it long after the designers and engineers have gone and the plaudits have faded.