Long after its gas and oil reserves have been exhausted, the UK will still have large onshore and offshore coal reserves, though most of these are beyond the reach of conventional mining techniques. Underground coal gasification can be directly coupled to carbon capture and storage with the potential to unlock these vast energy reserves without increasing greenhouse gas emissions. Paul Younger, Jon Gluyas, Martin Cox and Dermot Roddy, explain how the system works and explore its potential.

Figure 1. Schematic illustration showing how directionally-drilled boreholes can be installed in a target coal seam. The system allows each production borehole to access the gas produced by ‘burn zones’ developed in a number of parallel holes drilled from the same injection well. A second field of injection boreholes could be installed on the other side of the production well, and entire systems could also be engineered to succesively gasify multiple seams in a ‘multi-storey’ operation.

After centuries of mining, up to three quarters of the UK’s original coal resources still remain underground. However, most of this pristine coal lies too deep or too far offshore for exploitation by conventional mining. The key to accessing these resources without causing further damage to the atmosphere could be to remotely gasify coal underground using deep boreholes, bring the gas to surface for use, and then reinject carbon dioxide into the subsurface voids created by the gasification process.

All of the constituent technologies to do this already exist; they now need to be combined and applied to UK geological conditions. Using this approach, the future coal miners of the UK would not work underground or in opencast pits: they would be exponents of high-technology equipment, managing drilling and gas-handling from the surface.

The UK was the originator of underground coal gasification (UCG) technology almost a century ago, when Sir William Ramsay conducted exploratory experiments beneath Hett Hill in County Durham in 1912. World War I put a stop to these experiments, and UCG was later neglected in the UK while its abundant domestic reserves of oil and gas were exploited.

UCG was later adopted with enthusiasm in the Soviet Union, and at its peak it sustained twelve full-scale power stations. Natural gas discoveries led to a decline in UCG operations, but one of the plants remains in operation today in Uzbekistan, where it has operated for almost half a century.

Global rises in oil and gas prices are now making UCG economically attractive in many parts of the world, including the UK where several provisional licences for offshore UCG operations have recently been granted by the Coal Authority.

The Underground Coal Gasification process requires the steered drilling of boreholes into target coal seams (see figure 1). By inserting an electromagnetic source into the bottom of one borehole, a second borehole can be made to ‘home in’ on the electromagnetic signal until only a small pillar of a metre or two of coal separates the two boreholes. In any one area, an array of injection boreholes will converge on a single production borehole, which might itself be extended laterally through the seam for a kilometre or more.

Once the boreholes are complete, a flexible alloy pipe with an open-ended gas injection valve is inserted into each injection borehole. When a mixture of oxygen and steam is injected through this pipe, the coal at the end of the injection borehole can be made to ignite. As the supply of oxygen is limited, the coal does not combust completely; rather it is partially oxidised, forming a gas that still retains around 80% of the original energy content of the solid coal. As the pillar of coal between the two boreholes is consumed, gas will begin to flow to the surface via the production borehole.

The gas produced in this manner is generally referred to, rather loosely, as synthesis gas or ‘syngas’ for short. Strictly speaking, syngas is a mixture of hydrogen and carbon monoxide, though in the case of UCG the resultant gaseous mixture usually includes some methane and carbon dioxide. The composition of syngas derived from UCG varies with the properties and depth of coal seams, and with operating temperature and choice of oxidant. Data from actual UCG operations reveal the following range of syngas compositions: hydrogen (11-35%), carbon monoxide (2-16%), methane (1-8%), carbon dioxide (12-28%) plus other minor components. In any one UCG operation, consistent gas compositions can be achieved by controlling process conditions and blending the gas streams from multiple wells.

When the gasification process is complete, the resultant voids in the seams will collapse, in a manner which we can predict accurately drawing on a century of experience of conventional longwall coal mining. The resultant zones of rubble – known as ‘goaf’ – have high permeabilities, and they are connected to further pore-space in the overlying sedimentary rocks by collapse-induced fractures. Goaf offers an attractive possibility for long term storage of carbon dioxide arising from use of the syngas at surface.

The development of directional drilling technologies was a prerequisite for the current burgeoning global interest in UCG. Although now considered a speciality of the oil and gas industry, the first major application of directional drilling in the UK was in the coal sector – for ground-freezing to facilitate the sinking of shafts in the Selby Coalfield through water-bearing strata in the 1970s. A decade or so later, the escalating costs of offshore oil and gas developments, and the environmental imperative to minimise land-take in coastal or inland production facilities such as sensitive areas (in arctic and tundra regions), led the petroleum industry to invest heavily in developing directional drilling techniques.

The technology is now mature and reserves have been accessed with ‘extended reach’ wells penetrating more than 12 km laterally. A well of 18 km lateral extension is planned in northern Alaska to allow the reserves of a nearby small field to be processed using existing surface facilities.

The planning, drilling and placement of an extended reach well is a major undertaking requiring coordinated efforts of multiple disciplines and technologies. Once a desired well trajectory has been identified, it is necessary to make an integrated assessment of geological conditions, borehole lining (casing) requirements, drill-bit selection and drilling mud specification. Most modern rigs are equipped for automated handling of the sections of drill pipe which are sequentially threaded together to comprise the entire underground ‘drill-string’, at the end of which the drill bit cuts its way through the strata.

The down-hole tools for directional drilling include standard drilling equipment (bits, pipes) augmented with orientation sensors (to identify the position and directional azimuth of the borehole). Additional tools can be added to collect geological information in order to identify formations that the well is penetrating.

This capability is particularly valuable in applications to coal, as pairs of near and far-reading density probes can distinguish coal, which has a relative density of only 1.3, from all other rock types, most of which have relative densities on the order of 2.65. During drilling, data from these sensors is telemetered to the surface through the drilling mud itself. This allows engineers to assess drilling progress in real time, and to use the same mud pulse telemetry approach to send commands back down the hole to the directional drilling tools. 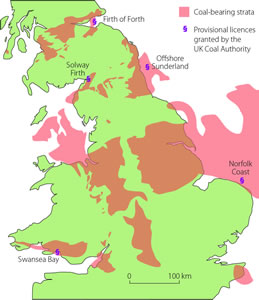 Figure 2. Map of the main coal-bearing districts of the UK, showing the locations of small areas within these where time-limited exploration licences for UCG developments have already been granted, on a ‘use it or lose it’ basis. Several companies are raising finance to develop clusters of wells in these license areas.

UCG can best contribute to a sustainable future if it is coupled to carbon capture and storage (CCS), a rapidly-emerging technology. The principal features of CCS operations were explained by Fells and Horlock in their article Carbon Capture and Storage (see Ingenia27). Following capture from a gas stream, the carbon dioxide must be compressed until it adopts its ‘super-critical’ form, in which it has the high density typical of a liquid, but retains the high compressibility of a gas. Super-critical carbon dioxide is also characterised by a low viscosity, which is a useful property when it comes to subsurface injection. Most discussion of CCS to date has considered storage only in depleted oil and gas reservoirs or geologically-similar deep saline aquifers. The voids created by UCG operations offer further possibilities.

There have only been a few CCS projects to date. Natural gas produced from the Sleipner field in the Norwegian sector of the North Sea contains a high proportion of carbon dioxide. Before the valuable methane is sent to shore, the CO2is extracted and reinjected into sandstones of the Utsira Formation at a depth of 1 km, which is considerably above the gas reservoir horizon, the layer within the strata where the natural gas is found. At In Salah, Algeria, carbon dioxide removed from the natural gas is re-injected into the reservoir horizon. Carbon dioxide produced by the gasification of mined coal in a surface power plant at Weyburn (North Dakota) is transported 320 km across the US/Canada border and injected into the Midale oilfield in Saskatchewan, where it helps increase oil production rates.

Comparable transport distances are envisaged for future CCS in the UK, with pipelines connecting onshore facilities to the central North Sea. Unless the carbon dioxide is used to enhance the recovery of hydrocarbons, storage at such large distances from source could prove prohibitively expensive. Elsewhere in Europe, such as at Laq in France and Vattenfall in Germany, the storage sites are located adjacent to the carbon dioxide sources.

While there are some deep saline aquifers closer to the shore of the UK than the North Sea oil and gas fields, the proposed areas of future UCG operations are closer still. These exceed the minimum depth of around 800 m required for storage of carbon dioxide in its super-critical form.

Storage of carbon dioxide in the goaf arising from UCG operations is expected to prove particularly valuable for at least three reasons: goaf is up to 2,000 times more permeable than deep saline aquifers; the ash that remains behind in the voids after UCG is likely to react vigorously with some of the injected carbon dioxide, forming solid carbonate minerals which permanently remove it from circulation. Finally a sealing layer of net stratal compression always develops above goaf panels offering a tight seal above the carbon dioxide storage zone.

The latter point is particularly important. It is precisely the presence of these zones of net compression that made it possible for the UK to pursue total extraction longwall coal mining beneath the seabed for more than a century without ever inducing sea water inflow. Furthermore, hydrogen, which is far more dangerous than carbon dioxide, has been safely stored in mine voids beneath urban Teesside for more than 60 years without any leakage. Experience of seismic and geodetic monitoring at Sleipner, InSalah and Teesside demonstrates our capacity to closely monitor injected gas movement.

The analysis of water flow in the UK’s abandoned coalfields shows that the only likely leakage pathways would be man-made infrastructure – boreholes in the case of UCG – and this is the element of the system over which we have most control. There is therefore no a priori engineering barrier to developing CCS in UCG voids. 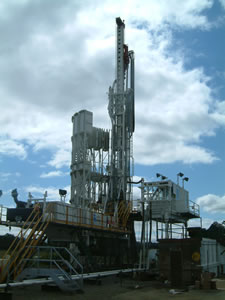 UCG opens up the prospect of accessing trillions of tonnes of otherwise unmineable coal. When combined with carbon capture and storage, UCG offers some attractive new low-carbon solutions on a vast scale. The first few provisional licences for UCG in the UK have already been issued, and others are likely to be issued in the near future. If developed appropriately, UCG coupled to CCS has the potential to allow us to keep the lights on over the intervening decades until full deployment of renewable energy sources if achieved.