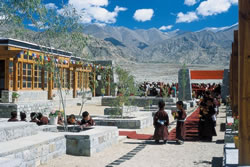 The opening of the Nursery and Infant Courtyard © Roland Reinardy.

A new educational initiative is being constructed in a small community on the northern border of India. It has been developed with a team of professionals and enthusiasts from around the world. Philip Cornwell, Project Director of the Drukpa Trust, and Sonam Angdus, Construction Manager of the Druk Padma Karpo Education Society, write about the engineering behind the award-winning Himalayan school project.

The idea for the Druk White Lotus School came in 1992 as a result of a request by local villagers in Ladakh to their spiritual leader, His Holiness Gyalwang Drukpa, to provide good education for their children. Ladakh, in northern India, had been close to the historic Silk Route (see map overleaf) but, following the closing of the borders with Pakistan and Tibet, the area had become more isolated. At that time, there were insufficient government school places and educational standards were relatively low. His Holiness asked some of his UK students to take on the school project. Rather than construct poor quality reinforced concrete buildings to house poor standard education, it was decided to create something exceptional as a model for appropriate modernisation in the region. The Druk White Lotus School seeks to give young Ladakhis the confidence and competence to succeed in the modern world, together with a sound grounding in Ladakhi language, culture and traditions.

The UK students set up Drukpa Trust, a registered charity, to create and deliver the project. The Trust appointed two young architects to develop ideas with educational specialists and to create a master plan for a new educational community in Ladakh. The master plan was drawn up in the form of a traditional ‘mandala’ which has spiritual significance in the Tibetan Buddhist tradition.

The two architects set about transforming the dream into reality. They were soon joined by a local construction manager and then a design team from both Arup and its advanced design practice, Arup Associates, who empoyed one of the young architects. Both organisations provided a wide range of professional inputs largely on a pro bono basis. This unique project has benefited from young professional volunteers from around the world who have given their time and talents to the project over the last decade (see box titled Young Engineers).

The team drew heavily on the design features and construction methods used in Ladakh’s numerous monasteries, many of which have stood for hundreds of years. The aim was to provide an entirely sustainable project. The ecological setting of the area is fragile, and the site strategy aimed to ensure a completely self-regulatory system of water, energy and waste management. 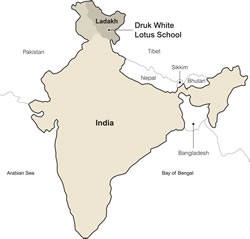 Construction of the school started in 1998 and the nursery and infant courtyard opened in 2001 with 88 children. The Shey campus currently serves 555 students, including 200residential students from remote areas. In April 2010, a branch school opened in Khachey, a seven hour drive down the Indus Valley.

The master plan was developed to take account of extreme climatic conditions that prevail in the area. Temperatures range from +30 °C in summer to -30 °C in winter at an altitude of 3,500metres above sea level. Rainfall is low and communities depend on snow melt water for irrigation and personal use. The road linking Ladakh with the Indian plains is cut off by snow for about six months each year, although air links between Delhi and Leh operate most of the year.

The area presents an abundance of engineering and design challenges which include limited water supply, a lack of reliable mains electricity and a restricted construction season. In addition, it does offer building designers some interesting features such as abundant sunshine through most of the year and huge granite mountains. The challenge was to balance the use of local materials and traditional construction methods with ‘smart’ design and technology. The team devised and implemented many ‘smart-simple’ solutions.

The smart-simple design starts with the orientation of the buildings. Even in winter, there is often intense sunlight and the teaching spaces heat quickly because of their optimal 30° south-east orientation, combined with fully glazed solar façades that gather the sun’s energy and store heat in high thermal mass walls. The residences are oriented due south, and use ‘trombe’ walls to store heat throughout the day, in readiness for occupation in late afternoon, evening and night-time.

The trombe walls comprise a double layer of glass, an air gap of 150 mm, and a wall coated externally with dark, heat-absorbing material, with moveable vents between the air gap and the inner room to be heated. During the day, the sun’s energy penetrates the glass, and heats the air in the gap and the inner mud-brick wall. The hot air rises and passes through the top vents into the dormitory room. Air flows from the room through lower vents to replace the air in the gap and the process continues. Towards the end of the day, the vents are closed to trap the heated air in the dormitory room, and the mud-brick inner wall radiates heat internally with a time lag. 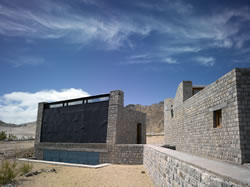 Ladakh enjoys intense sunshine for a large part of the year. The campus makes extensive use of passive solar energy as well as generating its own electricity. The mains power supply is highly unreliable and even when available, the voltage supplied is unstable.

In October 2008, the first stage of a state-of-the-art micro-grid solar power system was installed on the campus. The photovoltaic system generates energy with 54 south-orientated polycrystalline photovoltaic panels (9 kWp) mounted on timber frames. The panels are connected via inverters to the existing site low voltage distribution infrastructure. An energy centre has been constructed to house valve-regulated lead-acid batteries, which allow on-site energy storage. The system makes use of an AC coupling technique between the PV cells and battery system, where the frequency of the site grid is modulated in order to control the supply of solar electricity and prevent the batteries being overcharged.

The system is fully modular, allowing for additional solar panels and battery capacity to be installed as the school building programme progresses. The solar power system will need to be expanded as the school grows in order to keep up with demand (see Photovoltaic Array on previous page).

Two solar pumps raise water from an aquifer located about 32 metres below ground. One pump sends water to a reservoir at the top of the site, from where it distributes under gravity throughout the campus, while the other provides irrigation water for the numerous trees and plants. The pumps deliver potable ground water by gravity feed to a site that would otherwise be desert. The Tibetan Plateau is the source of several great rivers, including the Indus, which runs through Ladakh on its way to Pakistan and the Indian Ocean. These rivers are fed by snow melt. However, snowfall is irregular and in some locations even the high-level permafrost has melted, forcing whole villages to move. Water supply to the campus is satisfactory at present, but future supply reliability is uncertain.

The choice of materials was influenced by many considerations, including sustainability, durability and cost. Extensive use is made of local granite, mud, and local timbers such as poplar and willow. Traditionally, the sizes of internal spaces in Ladakh were constrained by the maximum available cross-sections of poplar beams, and so classrooms were typically small and had limited window area in order to conserve heat. In contrast, Druk White Lotus School uses large timber sections from neighbouring Kashmir to provide wide spans which allow spacious teaching areas that are unique in Ladakh and use extensive glazed areas to make use of solar energy. Local mud is used to make bricks, and roofing uses the traditional design of layers of local poplar and willow, mud and local grasses. Extensive use is made of local granite, worked into the buildings by craftsmen from the region. The two architects appointed at the outset of the project spent time in Ladakh researching local building techniques in monasteries and houses resulting in the school design utilising the best techniques available from local knowledge.

The plan now is to complete the ‘mother school’ in Shey and then develop local branch schools with local communities, as needed. The mother school is a ‘one-off’, but many of the design features can be replicated elsewhere. The design team makes available drawings free of charge to interested parties and information has been provided to various organisations in Ladakh and internationally (such as the Himalayan Trust). Financial sustainability for the long-term is being addressed by developing an associated heritage project that is attracting visitors and generating income for the school.

The design team’s skills have been recognised internationally by winning a number of awards. In 2002, for example, the Nursery and Infant Courtyard won three World Architecture awards, including Best Green Building. More recently, in 2009, the project received a Design for Asia Grand Award, presented in Hong Kong.

While much has been achieved, the school is not yet complete. We are now three-quarters of the way towards completing the facilities needed to provide high-quality education from nursery through to secondary school. The school grows year by year as students advance to the next class and it will take three more years for the school to reach its full strength of 740 students (up to the equivalent of class 11 in the UK system). More classrooms, more residential accommodation and more infrastructure are still needed, as well as additional learning resources inside the classrooms.

Postscript. Cloudbursts triggered mudslides in Ladakh in the early hours of Friday 6 August 2010. A mudslide flowed across the Druk White Lotus School campus in Shey depositing 1.0-1.5 m of mud plus boulders. There was no loss of life at the school, but substantial internal damage occurred to classrooms, science laboratories, residences and the administration offices.

How education can help engineers further develop the service economy