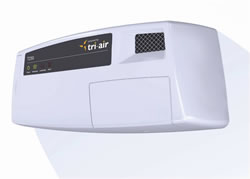 Tri-Air Developments has helped develop a machine that naturally and safely decontaminates indoor air and surfaces to protect against viruses, bacteria and superbugs, including MRSA, SARS and influenza.

The decontamination device, known as the Tri-Air T250, was originally created by the Worcestershire based inventor and microbiologist, Alan Mole. In 1991 he created an early and partially effective prototype of the machine which he developed over the next 10 years exploring the necessary microbiology, atmospheric chemistry and physics to progress the technology.

Tri-Air Developments, the UK-based joint-venture company was formed in 2006 to fund and further develop the device. It has patented the technology
in 36 jurisdictions in anticipation of its success and manufactures the product using sub-contractors, after which it is sent to licensed distributors.

Tri-Air Developments’ technology differs from other decontamination devices in that it doesn’t use a filter but replicates the natural process of ‘scrubbing’ the air clean using the hydroxyl particles. This is done through three distinct components; in the first the device draws in air which passes through a non-thermal plasma, the plasma cells create hydroxyl radicals and ozone as well as breaking bugs down. In the second stage a UV tube surrounded by a titanium dioxide mesh, kills pathogens and catalyses the reactions that go on. Finally these reactions create a ‘cascade’ of hydroxyl radicals that kill viruses and bacteria in the air and on surfaces within an enclosed environment.

The UK Government’s Health Protection Agency’s Centre for Emergency Preparedness and Response has successfully tested the technology. Tests in 2007 achieved an almost complete kill on airborne MRSA in less than three minutes, and on MRSA on glass in 24 hours. The company has found the product to be 100 times more effective than any comparative method of de-contamination.

The Tri-Air T250 treats an area of around 250 cubic metres and is proving successful in hotels, casinos and cruise ships. A second product, the Tri-Air T35, which will treat an area of over 35 cubic metres is currently in development.