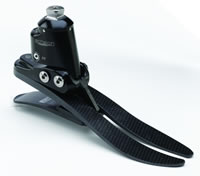 A new kind of prosthetic foot was a finalist in this year’s MacRobert Awards for innovation. Professor Saeed Zahedi OBE, Technical Director at Blatchford, writes about how the artificial limb has been developed.

The lifestyle demands and expectations of people who have suffered traumatic and life-changing injuries that involve the loss of a limb have risen dramatically. The onus is now on engineers to develop prosthetic devices that enable these people to regain and then retain active lives.

This is a far cry from the passive and palliative prosthetic products of the past. It gives us new challenges in terms of understanding the needs of individuals; of investigating the structures and mechanics involved in everyday tasks such as walking on uneven or sloping surfaces and climbing stairs; and then of combining different engineering disciplines into complex systems.

The Echelon is a new kind of combined ankle and foot prosthesis that was shortlisted for The Royal Academy of Engineering’s 2010 MacRobert Award for Innovation.

The innovation in Echelon is not just in the device itself, which represents a new way of tackling many everyday difficulties faced by amputees and differs from previous prosthetic devices in that it is a combination of biomemetic and biomechanical structure. There was much innovation too in the way that we at ChasA. Blatchford, having been in the business of manufacturing prosthetic limbs for more than 120 years, used biomimetics to model how the human muscles acting on the foot actually work and to discover where existing prosthetic limbs were failing our customers.

The starting point was talking to our customers: amputees. In the market covered by Echelon, these individuals had lost lower limbs through accident, disease and surgery, some as a result of complicated wounds sustained in combat. Whatever the cause of the loss of the limb, generally there was little difference in the underlying levels of fitness between active amputees and the population as a whole.

Some of the constraints were revealingly mundane.
An amputee who had been capable of running a 100-metre race on a flat track in 11.2 seconds said that his biggest difficulty now was going up and down stairs. Uneven pavements and surfaces and problems of simply standing for more than a short period on slopes were cited by others. Just getting into and out of a chair is not easy: anyone who doubts this should try rising from a chair without flexing the ankle at all.

The combination of these difficulties meant the biggest single issue for amputees was comfort, focusing on the stump, the interface between the remaining leg and the prosthetic limb. There were also the real fears of falling over and tiredness resulting from continuous over-compensation by the rest of the body.

Fatigue is a common complaint and there are specific concerns about the extra load on the surviving leg, which sometimes manifests itself as lower back pain, experienced by 75% of lower limb amputees under 30 years old.

We undertook biomimetic studies to model the operation of the lower leg muscles impacting and pushing off during the walking cycle – see Biomimetics. This showed us that past assumptions about the way the leg-ankle-foot combination works had been far too simple. Previous prosthetics had relied on the interaction between foot and the terrain being an elastic one, based on Hooke’s law of elasticity – which states that the extension of a spring is in direct proportion with the load applied to it. This meant that replacement limbs were essentially utilising carbon fibre springs to absorb and return the mechanical energy.

Our research showed the interaction to be better controlled by a more complex visco-elastic one, and that a better prosthetic solution in terms of comfort and performance would be produced by a spring and damper combination. Instead of a relatively simple biomechanical device, our new prosthetic needed to be more of a system.

Hydraulics and mechanics are combined in the new system. Echelon consists of a hydraulic damping unit set within a prosthetic limb based on composite springs, and with the elements of the leg (knee, ankle and foot), integrated and tuned to the needs of each individual. The hydraulic unit is a small precision-engineered unidirectional cylinder providing around 2mm of travel for plantarflexion (pushing the foot downwards) and just 1mm for dorsiflexion (raising the foot back upwards). We looked initially at a rotary unit, which had the advantage of compactness, but a linear cylinder proved easier to manufacture.

The ankle unit, incorporating the hydraulic cylinder, provides up to six degrees of plantarflexion and three degrees of dorsiflexion. We can then complement these further to 15and 25 degrees respectively by attaching separate heel and toe carbon-fibre spring elements to complete the foot, dramatically expanding the range of activities the amputee can achieve without discomfort.

The hydraulic unit with the spring elements converts the action of walking into a ‘rolling’ action, like that of a wheel. This is a lot more comfortable than a simple spring arrangement, where walking is a flat-footed ‘square’ action, which is inherently less efficient. The prosthesis can now handle small and temporary variations such as uneven surfaces as well as prolonged extraneous activities – like standing on a slope – better than conventional devices (without the need to compensate).

Once the basic configuration of the new prosthetic was determined, there were many adjustments and trials to optimise the device, using both our design systems and systematic verification and validation of prototypes. Key considerations for the patient included the weight and the physical size within a foot-like structure that would fit into any type of shoe.

We also needed to build in robustness as these prosthetic limbs take loads of up to 250Newton metres. This is done through careful selection of long lasting seals and tight control of tolerances, achieved by 5-axis machining.

These optimisation and testing activities determined the final configuration and the selection of materials. Testing on a foot simulator for example which went up to three million cycles (steps) indicated that we needed a more robust seal arrangement within the hydraulic unit; tests on wear resistance indicated that patients would be able to detect even small amounts of wear, and that determined a design of bearings and the use of stainless steel for both bearings and the 10 mm pin linking ankle to leg.

To save weight we used aluminium alloys from aerospace and titanium screws. The foot part of the prosthesis now fits inside a ‘glide sock’ to minimise the friction within a polyurethane outer.

The selection of the viscous fluid within the hydraulic cylinder was also crucial working at low volume but under high pressure and having to evacuate all the air in the system. It had to withstand the wide range of operating temperature and was critical in meeting the needs for robustness and durability of the product.

We have built in flexibilities within Echelon to enable a large degree of customisation with different springs for people of different weights, for instance, and a range of foot sizes. The fitting of the prosthesis is important for its success with the individual. The socket interface connecting to the body needs to provide comfort, and Echelon through self alignment of the body centre of mass over centre of pressure allows the amputee to optimise the alignment of the ankle joint with the evening of pressure distribution around patient’s stump to allow the amputee to maximise this self-aligning capabilities of the new limb.

The difference for the amputees is noticeable immediately. Some have indicated as life transforming. Where previous prosthetic limbs gave a stiff uniform form of walking, with the foot put down flat upon the ground, the Echelon produces a more normal ‘rolling’ gait, and that benefits both comfort at the stump and the loading on the other leg. Several early patients described the initial sensation as like walking on the deck of a yacht, but many were in tears because the sensation was similar to what walking had felt like before the amputation.

Hundreds of users are telling us that this is, literally, a step-change for them and their lifestyles. Their Echelon limb gives them back confidence and independence, as well as mobility and freedom from pain. Its ability to perform in a variety of conditions, has made Echelon as much a medical necessity as just another prosthetic device.

Now we are investigating the potential for using smart technology with a microprocessor controlled version of Echelon. We are working on introducing built-in intelligence in the spring-and-damper configuration that will store up energy and then impart a degree of extra power when it’s needed: an active rather than a passive device that will help patients to walk up hills for example, by providing assistance without adding external power.

In some respects, some of the issues we have faced in prosthetic limb development seems akin to those in automation and robotics, in that we are looking for control and precision. Certainly some of the tools that will enable us to achieve that will be similar to those used in other areas of technology. However, there is a big difference: our customers are human beings and their needs come first. With Echelon, we have given them some comfort, but there is more that we feel we can, and will, achieve.

Satellite broadband around the globe

How the 2010 MacRobert Award winner, Inmarsat, has developed a lightweight and portable mobile satellite communication system.

The evolution of the pendulum in time-keeping devices.

A poem from a collection published in 2010