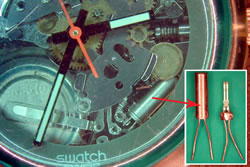 © Department of Physics, University of Regensburg

Before: Clocks through most of their early history used pendulums to help measure the passage of time. The pendulum alternates between potential energy and its kinetic energy as it drops and lifts at either end of its swing – effectively using gravity as its ‘spring’. In the 18th century it was discovered that accurate time-keeping could determine a ship’s longtitude and after much loss of life through inaccurate time-keeping, it became imperative to stabilise the pendulum.

Then: John Harrison solved this problem by engineering a clock that used metal springs and balanced masses. His chronometer could ride the waves, keep correct time and enable a ship’s crew to determine their location.

Today: Watches are electronic and most people carry quartz watches that are even more accurate than Harrison’s chronometer. But inside modern watches is a tiny (3 mm by 0.3 mm) quartz tuning fork that bears a remarkable resemblance to the balanced pendulums Harrison used in his first chronometer. This works in just the same way too, with the moving mass of the quartz playing the role of the pendulum’s mass and its elasticity the role of the spring.

How it works: The quartz tuning fork still ‘ticks’ like a pendulum but much faster because it is so small; usually at 215beats per second. The oscillation signal has a frequency of 32,768 Hz which is divided 15 times by an electronic divider creating a frequency of exactly 1 Hz. This drives a stepper motor connected to the second hand which turns six degrees per step, thus completing a full circle in 60 seconds.

Rate gyroscopes help businesses survey underground. They can also guide relief well drilling as they did withthe recent Chilean rescue at the San Jose mine.

A poem from a collection published in 2010