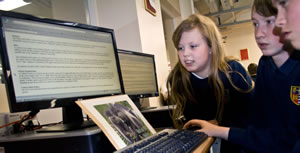 Teesdale Secondary School in County Durham has won the 2010 Rolls-Royce Science Prize. The school has received £15,000 to supplement it’s science teaching budget and students will spend a day with the Red Arrows display team. Teesdale fended off competition from more than 1,500UK schools
to win.

The winning project involved pupils, aged between 11 and 14, using practical research in the STEM subjects of biology, technology and maths to design and build a feeding mechanism to enhance the lives of monkeys at Chester Zoo. With the assistance of zoo staff, the students experimented with different materials and techniques to engineer feeders that challenged the monkeys to work out how to access their food, keeping their minds active. During the project, the pupils used problem solving techniques and practical research to create the feeding mechanism, which is now a permanent fixture in the monkey enclosure.

Rolls-Royce Chief Executive Sir John Rose presented the teachers in October 2010, at an award ceremony held at the Science Museum in London. Moulton School and Science College in Northampton were the runners up and were awarded £10,000 each. Teachers from the school developed a project that enabled students to learn how forensic science techniques are used in police investigations.

Eight other finalist schools received £5,000 each to implement their science projects in the classroom throughout the coming school year. A total of £120,000 was awarded by Rolls-Royce to schools in acknowledgement of and to encourage inspirational science teaching.

For more information about the Science prize see: www.rolls-royce.com/scienceprize 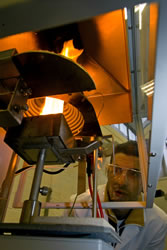 The Academy is hosting the new Technician Council, a joint initiative intended to raise the profile of technicians in the UK. It includes members of the engineering, science, ICT and health communities and is funded by the Department for Business, Innovation and Skills (BIS).

The Council, chaired by National Grid Chief Executive Steve Holliday FREng, had its first meeting in July 2010. It was formed in response to the findings of a group led by Lord Sainsbury that included The Gatsby Charitable Foundation, Engineering Council, Science Council, EngineeringUK, the Department of Health, The Royal Academy of Engineering, National Apprenticeship Service, UK Commission for Employment and Skills and others. The Council’s mission is to develop and secure the UK’s STEM based sectors by encouraging the training, support, development and recognition of technicians.

All have a keen interest in the career development of hundreds of thousands of skilled and semi-skilled employees and by working together will ensure that technicians know which qualifications are in demand and where to find employers that require them: in short, raising the status of technicians in engineering, science, ICT and health.

Task groups are being formed to consider – among other matters – qualifications, routes from apprenticeship to further and higher education, messages to influencers, and the benefits to the UK likely to result from a more highly motivated technician cadre.

An employers’ group will consider links with the professional bodies to see whether existing initiatives can be developed further to promote the benefits of registration, leading to an increase in registration among technicians. Employers interested in knowing more about participation in the employer task group should contact the secretariat at david.ozholl@raeng.org.uk

The UK Energy Research Centre (UKERC) has published a report in September 2010 suggesting that the UK will face significant challenges in meeting its renewable energy targets. The report, entitled Great Expectations: the cost of offshore wind in UK waters – understanding the past and projecting the future, explains that the costs of offshore wind power have risen significantly in the five years since it was first deployed and suggests ways in which these costs may be reduced in future.

Offshore wind energy is expected to play a major role in contributing to the UK’s renewable energy targets, but the costs involved in this energy generation have escalated markedly, especially against early predictions. Producing electricity has become more expensive and costs went up in part because of currency and commodity price movements and also because of supply chain shortages and bottlenecks.

UKERC point out in the report that UK offshore wind technology is still at an early stage of development. Offshore wind currently only generates about as much energy as a small conventional power station. The report emphasises that many developing technologies go through a period where costs rise before they begin to decrease. Despite these findings, UKERC find grounds for optimism suggesting that costs will plateau in the future and eventually come down.

The UKERC report can be downloaded from www.ukerc.ac.uk 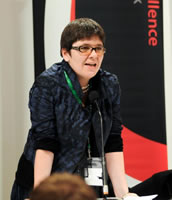 The Battle of Ideas is an annual weekend festival, initiated by the Institute of Ideas, which aims to showcase new arguments about the core issues of the day by organising debates on an array of subjects. This year the event was held at the Royal College of Art in October and The Royal Academy of Engineering co-produced a debate entitled Engineering the future: cautionary tale or utopia? Two of the speakers, Dr Scott Steedman CBE FREng and Dr Natasha McCarthy, were from the Academy.

Chaired by Claire Fox (Director of the Institute of Ideas and panellist on Radio 4’s Moral Maze) the debate focused on how the UK can secure a future against unsustainable growth and whether it can still engineer the future with aspirational visions. In India and China, engineers create ambitious road and rail projects and the debate raised the question as to whether this should be considered for the UK or if we need to ‘make do and mend’.

The debate contained interesting discussions between the panellists and the audience that addressed the following questions: Should engineers or society decide which technologies we use? What are the drivers and barriers for innovation and adoption of particular technologies – the vested interests of those with the power; CO2 footprint; economic reasons or the public? Are we prevented from dreaming of what technology might bring us, as lobbying groups convince us it is ‘man-made’ and therefore against nature? Are great engineers those that can solve a problem or those that can identify what the problem is in the first place? And do engineers offer society informed choices or are they technological autocrats?

The discussion enabled engineers to engage with a wider public audience and helped raise awareness, debate and reflection on the impact of engineering on our world. The weekend event is available to view at www.battleofideas.org.uk 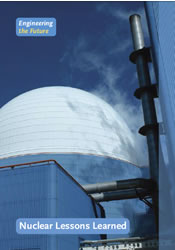 In October 2010, Engineering the Future, an alliance of professional engineering organisations, published the report Nuclear Lessons Learned. The report focuses on the lessons learnt from both previous and current nuclear projects around the world. If adopted, the findings should help ensure the success of future UK nuclear new build programme.

The government’s recent draft Nuclear National Policy Statement confirmed eight potential sites for the new nuclear power stations, with the first estimated to be online by 2018. However, the last operating UK nuclear power station was built 15 years ago and since then the levels of knowledge and experience needed to get the project started have declined. The alliance of engineering bodies, including The Royal Academy of Engineering and the Institution of Civil Engineers hopes their report will help the ambitious new build be delivered on-time and as efficiently as possible.

The study demonstrates that despite the long intervals between domestic new build programmes, lessons have been learnt that will significantly reduce risks and delays. Six of the most relevant projects in recent history were examined, including plants in France, Finland and China. The outcomes and recovery of the unforeseen issues that arose in these were documented to identify the common lessons learnt.

Nuclear Lessons Learned categorises the lessons for three audiences: government, the nuclear plant developers, and the supply chain, establishing five common lessons that can be applied to the UK new build programme to help ensure smooth and economically efficient delivery. These outlined that follow-on replica stations are cheaper than one-of-a-kind, designs should be mature and licensing issues resolved prior to construction, a highly qualified design and planning team is essential, all sub-contractors must be experienced or taught nuclear-specific construction skills and early and effective engagement with communities is essential.

The report can be downloaded at www.raeng.org.uk/nll

How video games offer an alternative to established practices in simulation-based training and design.

The development of the Echelon prosthetic foot.

The evolution of the pendulum in time-keeping devices.