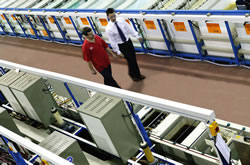 Plating line at Harwin’s factory in Portsmouth where electronic components are plated with nickel, gold, and sometimes tin © Harwin

In the editorial for Ingenia 44, it was emphasised that “Only by integrating research skills with delivery experience throughout the lifecycle can engineering, which is pushing the boundaries of knowledge, manage the risks and maximise the benfits of innovation.”

As a company we are tremendously keen on training apprentices as it is the only way we get a chance, over four years, to coach young people in every part of the business, regardless of what area they are destined for.

We find, with the complexity of modern engineering, it is of absolute importance to have horizontal integration of all the skills from product design, through tool design, through production machinery design to the final product. In many areas we are at the cutting edge of the electric and electronic technology and our production engineers don’t necessarily inform the designers of the advances in engineering capability that have been made.

Advances in wire erosion and spark erosion have made huge impacts on tool design, both reducing cost and increasing performance. Moulding and stamping tools too are hugely more reliable and can run for longer hours than was conceivable even ten years ago.

New technologies mean that the toolmakers and engineers can give designers more flexibility while reducing cost, provided they can be part of the discussion with the design engineers on how the product should be handled and presented for manufacture.

To achieve this integration, apprentices need to spend approximately three months working in each department. During the first two years of the programme, while they are taking their Bachelor of Technology, they spend three months in each department. During the second two years, to cover their Higher National Certificate (HNC), they will spend more time in the departments that they are most interested in from a career point of view. We then sponsor some of the apprentices to do degrees in business studies or mechanics.

The cost to the company of the first four years of an apprentice is approximately £75,000 in salary and fees. While the company funds the degree courses, we can regard the productivity of the apprentice sufficient to cover the costs of the fees and salaries.

At the moment there is deep concern that these programmes will be dificult to sustain as the government is considering reducing this level of funding. We feel that this would not be an encouragement to manufacturing industry to expand the long process of training engineering apprentices.

Having spent much of my life as an engineer being passionate about the necessity of using all sources of energy, in all systems, rationally and efficiently, I am shocked that there are still people like your letter writer (Ingenia 44) Ruth Lea, who are convinced that British manufacturers should be enabled by the authorities to continue to use energy in the same inefficient ways that they have done in the past.

In 1983, when I compared energy consumption per unit of monetary output of seven major industrial sectors in West Germany and the UK, in every sector the UK consumption was significantly higher – in some cases almost double that of West Germany. Also, a comparison of the share of total electricity consumption contributed by CHP (combined heat and power) showed a higher level in West Germany.

At the same time, the Danish Government published research showing that there was a potential of an almost 50% reduction in national electricity consumption.

Since that time, no great progress has been made in either efficiency of use maximisation or in CHP maximisation in Britain. Also despite our advantages in renewable sources, the percentage contribution in electricity generation is only a fraction of the proportion in countries like Denmark, Germany and Spain.

Although it is admitted that the era of cheap oil has ended, there has been a deathly silence on the inconvenient truth that almost all renewable sources of energy come in the form electricity, at prices at least four times the price of natural gas, oil and coal as primary sources of heat and power. At present, little more than 10% of energy is delivered as electricity, the rest is either for heat, transport and other power uses. So almost 90% of all delivered energy, in a low carbon economy, will be four times or more expensive than at present. The source most popular with our government, offshore wind, could be eight times as expensive because of the higher investment required. I believe that the present national total annual expenditure on energy is about £70 billion, despite a trade deficit on manufacturers of £55 billion a year. So a low carbon economy, in which consumption has not been reduced to a fraction of the present level, is likely to fulfil the President of the EEC’s 1980 warning that “it is certain that if we do not change our ways while there is still time, our society will risk dislocation and eventual collapse.”

With so little time left to achieve the necessary consumption reduction, is there any alternative to putting the economy on a ‘wartime footing’ in order to avoid a national disaster? Without energy rationing, price increases, not only of energy, would cause serious social strife.

I hope that the government heeds these warning signs before it is too late.

Schematic showing the pathway for call-routing using an UMA-enabled handset and network. Some implementations of UMA allow calls to be switched from the UMA system to the cellular radio access network and vice versa. This means that a user can move out of range of one and into the range of the other during a call without the call being interrupted or dropped – signal permitting

The article by Professor Saunders in Issue 44 of Ingenia provides a very clear exposition of the potential benefits of femtocells for the end user of mobile phone systems, but does not make any mention of what is possible with the principal competitive technology – Unlicensed Mobile Access (UMA) – an implementation of Generic Access Network technology.

Similar to femtocells, UMA utilises a local wireless access point to route calls from a mobile phone via a secure IP connection into the carrier’s network via the internet. Where it differs, however, is that, provided the user’s handset is UMA-enabled, it can operate through any standard wireless internet access point to which the user has access. Given that WiFi access is available in an ever-increasing number of locations where connectivity to the regular mobile phone network is limited or non-existent, UMA can provide an extremely effective solution without the need to be tethered to dedicated femtocell hardware from a given phone company. UMA calls do still ultimately route through the network to which the user subscribes and can therefore be charged for at the same cost to the user as other calls.

Femtocells may be attractive to phone companies as they keep the user fully locked in to their own network but UMA provides a versatile solution which is very simple from the user perspective and which is readily available now. I regularly make UMA-routed calls via my home WiFi network, and in coffee shops, restaurants, airports, etc. in both the US and the UK where WiFi access is increasingly provided free, and have had few problems with connectivity or call quality.

Following the publication of ‘Rebuilding lives in times of disaster’ in Ingenia of June 2008 (Issue 35), we at RedR wanted to update your readers on our latest activities in Pakistan following the summer floods. The charity originally created a register of engineers who could be called at short notice to work with front-line relief agencies. Today, RedR improves the effectiveness of disaster relief by training relief workers and providing skilled professionals to humanitarian programmes worldwide.

As an immediate response to the floods, RedR undertook an initial needs assessment to ascertain the key training needs of aid agencies and their staff on the ground in Pakistan. The assessment revealed the need to develop the skills of relief workers in key response areas including: safety and security, humanitarian coordination, logistics and humanitarian practice and principles. RedR has trained 91 relief workers in the coordination of humanitarian activities, making sure that none of the people affected by the flooding is missed; that organisations work together more closely; and that the overall humanitarian response is effective. RedR is also delivering training in the Do No Harm framework, equipping aid workers No Harm framework, equipping aid workers with skills to work with communities; as well as the Essentials of Humanitarian Practice, to support those with transferable to skills to be involved in relief efforts.

RedR has responded to requests from aid agencies for relief workers from the RedR Register of Members and provided half-day, in-country security briefings to newly-arrived international relief staff.

The scale of the flooding, which has affected 21 million people, means that recovery will be a long process. Progress is being made and, with the ongoing help of our supporters, RedR will continue to support aid agencies on the ground and ultimately help rebuild the lives of those affected. To find out more visit: www.redr.org.uk 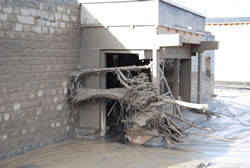 The August mud-slide transported boulders, trees and debris down the mountainside and deposited them on the school

During the time that the previous issue (44) of Ingenia was going to press, the Druk White Lotus School was hit by a mudslide. Early in the morning of 6 August, it flowed across the school campus in Shey, forcing the 200 residential pupils to be evacuated to Shey Palace on nearby high ground. Luckily no pupil was hurt in the incident.

The mud reached up to 1.5 m deep in some classrooms but the buildings withstood the slide. The damage was mostly to the internal walls, floors, books, equipment and furniture. We have since had a visit from Richard Hughes, a mudslide specialist, and he has begun to prepare design concepts for protective measures for the future. In September, Nicola Perandin, a structural engineer from the London-based Arup design team, visited the campus for a week to examine each and every building and piece of infrastructure. Fortunately, the only structural damage was found at the end wall of the junior south block.

Because the school sits on the edge of an ‘outwash fan’ that has evolved over thousands of years it is likely that water, rock and mud flows will happen again. Consequently, the Arup team, is working on the design of protective measures that can be implemented from 2011.

In spite of our misfortune, the pupils have shown remarkable resilience and celebrated Founders Day on 24 September, marking the 9th anniversary of the opening of the school. The students sang, danced, performed plays, enjoyed samosas, and took part in competitions. They also enjoyed a visit from the Bollywood star, Aamir Khan, who brought the media spotlight to our appeal. We are looking forward to a more positive 2011 when we hope to see our school restored to its former glory.

How video games offer an alternative to established practices in simulation-based training and design.

Are we ready for autonomous systems?

A look at some of the hopes and concerns for robotic and autonomous technology.

The development of the Echelon prosthetic foot.

Rate gyroscopes help businesses survey underground. They can also guide relief well drilling as they did withthe recent Chilean rescue at the San Jose mine.