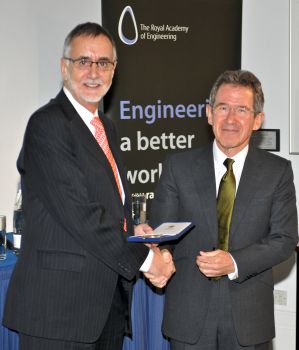 As Sir Richard Feachem FREng accepted the Sir Frank Whittle Medal from Lord Browne, he noted that he owed much to the great inventor of the jet engine. He is now able to criss-cross the world much faster at 36,000 feet than he would have done at 25,000 feet pre-Frank Whittle. However, he also warned that long-haul air travel mixed with short incubation periods, could actually help pandemics spread much faster © The Royal Academy of Engineering/Charles Glover

The Royal Academy of Engineering’s Sir Frank Whittle Medal for 2010 has been awarded to Academy Fellow, Professor Sir Richard Feachem, for ‘engineering innovations in international development’. Professor Feachem flew from his home in California to London in January 2011, to receive his medal from Lord Browne of Madingley and to talk about his vision for reorganising the way aid is given to developing nations.

Sir Richard Feachem KBE CBE FREng is one of the world’s most influential public health policy advisors. In the Academy’s New Year Lecture Re-engineering Aid – a bold agenda for the 21st century, he spoke of his belief that aid distribution to the world’s poorest countries needs a major rethink. Trillions of dollars have been spent on aid over the past 60 years, but he questioned the balance sheet of success and failure and looked at how the poorest were really benefitting.

From 2002 to 2007, Sir Richard served as founding Executive Director of the Global Fund to Fight AIDS, Tuberculosis and Malaria and was Under Secretary General of the United Nations. During this time, the Global Fund grew from scratch to become the world’s largest health financing institution for developing countries, with assets of US $11 billion, supporting 450 programmes in 136 countries. Now, as the executive Director of the Global Health Group at the University of California, he is dedicated to turning new ideas into large scale action in developing countries.

Sir Richard’s views on development aid have been informed by his comprehensive experience in the industry. Starting out as a civil engineering graduate, he helped to provide water and sanitation facilities in Lesotho, later he became Dean of the London School of Hygiene and Tropical Medicine before being seconded to the World Health Organisation and then the World Bank. 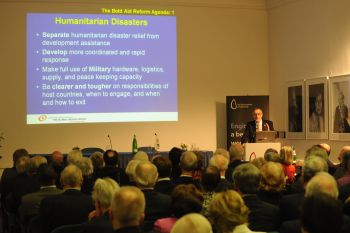 Sir Richard’s proposed reforms sit in the middle of a fierce debate among aid industry experts. On the one hand, there are those who say aid has done little to drive economic growth and that there is a low social return on investment. This argument says that only the self-reliant efforts of the poor themselves can get them out of debt.

Yet those in favour of aid, would argue that there have been tremendous successes. Life expectancy has increased more in the last 50 years than in the past 5,000 years, mortality and fertility rates are down. Additionally, specific goals have been achieved such as the elimination of smallpox, the control of malaria and the success of antiretroviral therapy in Africa.

Sir Richard acknowledges both sides of the argument and does not propose an entirely new model for aid, but believes reform is essential and there should be a fundamental rethinking with several new ‘building blocks’ in place. He calls this six-point plan ‘Bold Aid Reform.’

In this plan, the world needs to accept that acute humanitarian disasters should be dealt with separately from development. There is a need to develop a more rapid response and deploy military resources such as hospital ships and helicopters. Disaster relief needs to be coordinated more swiftly with clearer rules of engagement and of exit with the host country.

There needs to be a new focus on the non-aid development agenda. Aid is not the most important policy tool for development. Greater influence comes through trade and investment policies. Duty-free, quota-free access should be established for imports from the poorest countries.

New ways need to be found to support very small countries and keep alive nation states that are struggling. Sir Richard identified 14 small, poor countries that might cease to exist without outside aid.

The richer world needs to support the next generation of leaders. Poor countries need leaders, most of whom will come from the local universities. This leadership pool could be built by establishing well-funded, long-term, co-managed marriages between northern and southern medical, engineering and management schools. The UK could help by establishing more development related fellowships for study in this country.

In his talk, Sir Richard shone the spotlight on some countries that he felt should be doing more to help their own people instead of relying so much on aid. He questioned why some don’t help their neighbours in times of emergencies. He also described some of the medical advances that have benefitted the lives and livelihoods of millions of people in poorer nations. As the global recession hits some of the usual donor countries - and as new players like China appear on the scene - he felt the timing was right for a radical reappraisal and new approach to development aid distribution.

Giving engineers training, encouragement and opportunities to show their expertise with the wider public