Rolls-Royce has a long history of collaborative research with universities. Thesehave reached a maturity over the past two decades with the creation of University Technology Centres (UTCs). Mark Jefferies, Chief of University Research Liaison at Rolls-Royce, describes how UTCs are established and operated, giving examples of some of the key technologies that they have helped to deliver.

Rolls-Royce University Technology Centres are at the heart of the company’s approach to developing the technology, to deliver its vision and secure a competitive advantage. The UTC model has been developed over two decades and has had a significant impact on the relationship between industry and academia. Initially concentrated in the UK – the first were set up at Imperial College and Oxford University in 1990 – today’s international UTC network reflects the company’s global footprint.

As well as the 19 centres at 14 UK universities, four UTCs are located at German universities, with others in Italy, Norway, Sweden, the US and Korea. Each UTC addresses a technical discipline whether be it noise, combustion, aerodynamics, electrical systems or manufacturing. Each is led by a senior academic with a global reputation in their field. They are supported by academics, research fellows, research assistants, technicians and a number of students undertaking PhDs and other higher degrees.

Funding is provided through rolling five-year contracts, which enables UTC teams to take a long-term strategic view of how to achieve specified research programme targets set together with Rolls-Royce. Additional funding in support of fundamental and collaborative research may be provided from complementary sources such as the EU and, in the UK, the Engineering and Physical Sciences Research Council (EPSRC), the Technology Strategy Board, learned societies and regional agencies. 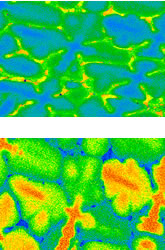 Maps of chemical elements in cast superalloys developed by the Cambridge UTC. Rhenium (top) and tantalum (bottom) are added to provide additional strength to the matrix and precipitates in these alloys respectively. When these alloys are cast, the rhenium partitions to the growing solid and tantalum partitions to the liquid, leaving the patterns shown above © University of Cambridge

To minimise duplication and maximise focus, the establishment of UTCs demanded an organisational and cultural change in Rolls-Royce’s approach to research and development. Instead of the more usual large inhouse R&D function, the company has developed a UK based Strategic Research Centre. This is made up of around 45 specialist staff on ‘technology watch’ – evaluating and developing new concepts that may make giant strides in performance or show potential for brand new markets.

Each UTC is ‘owned’ by an internal Rolls-Royce business unit, typically the engineering team of a supply chain unit seeking new technology and fresh capability that could play a part in new product development. Technologies undergo regular reviews and pass through formal ‘gates’ as they mature. A UTC will generally take development to the third or fourth level of technology readiness (TRL3/4) before a new technology is transferred back to the company to conduct validation activity advancing it towards TRL6, at which point it can be utilised as a feature of new product designs.

Ownership of Intellectual Property Rights (IPR) on emerging technologies depends on the arrangement Rolls-Royce has with universities. Alternatively they may be governed by national regulation, but Rolls-Royce retains access to the IPR while simultaneously providing for its use by the academic bodies, including for research and teaching purposes. Where IPR remains with the universities, it is licensed back for use by its sponsor.

There have been a wide range of successful research collaborations in recent years. One such key research area for engine makers is that of materials research. With virtually all current commercial aircraft and many power generation plants using gas turbines, the challenge is to find radically new materials – beyond today’s nickel-based superalloys – that will enable engines to run hotter in order to raise thermal efficiency, cut fuel burn and reduce harmful emissions.

The high-pressure turbine blade is the most demanding individual component as it sits in the hottest part of the engine. Manufactured as single-crystal blades to eliminate grain boundaries, they can run at temperatures hundreds of degrees hotter than the melting point of the materials they are made of. This is due to the tough, specially-developed coatings and elaborate cooling labyrinths within the blade’s core.

Today’s high pressure turbine blades are composed of several elements to deliver the required temperature capability. However, as fourth-generation superalloys, the pace of their continued development is slowing to the point where researchers must look past the small iterative increases offered by nickel-based materials towards entirely novel materials.

This is where the blue-sky vision and focused technical expertise existing within UTCs can generate significant results. The materials research team comprises Cambridge UTC which drives high-temperature research, Swansea, specialising in the testing of mechanical properties and lifing capability, and Birmingham which undertakes materials-and-process modelling (cont. on page 38) and manufacturing issues such as alloy production and joining technologies. This partnership has led to the development and securing of patents for several new alloy systems.

The research focus is now on producing refractory metal silicides for much higher temperatures and titanium aluminides for lighter weight components. These pose an entirely new set of design and manufacturing challenges for researchers. It is only by developing new materials that step-change benefits can make significant inroads into the ambitious efficiency and environmental targets set by the industry. 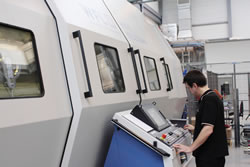 This machining centre – the WFL M100 millturn funded by East Midlands Development Agency is capable of carrying out a range of turning, boring, milling and measurement operations. It allows almost all machining work to be conducted on large components up to 5 m length without having to move it between different machines.

Rolls-Royce derives considerable value from working with universities. Formalised UTC relationships offer the company much more efficient access to high-quality research that delivers significant technology advances. Loughborough UTC, for example, supports the Rolls-Royce energy business research out of Montreal in Canada, and the network facilitates increased international collaboration with other leading universities around the world. The creation of a sophisticated Unsteady Fluid Dynamics Facility at Loughborough University in 2008 was underpinned by the joint relationship with Rolls-Royce.

Another mutual benefit lies in recruiting the best staff. Working on leading-edge industrial challenges is an attractive proposition and UTCs draw in highly capable researchers and students. The universities benefit from the quality of research and the subject matter for papers, dissertations and speeches from Rolls-Royce’s visiting professors. The UTC gains from this critical mass of talent and the company benefits as a proportion of students are attracted by the opportunity to work for a firm that is recognised worldwide.

Rolls-Royce also sends its own employees to work and study within UTCs. A number of Rolls-Royce engineers have completed PhDs at Loughborough, enabling the company to develop its own staff. 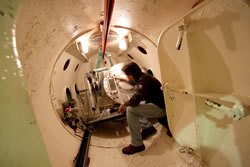 Rolls-Royce collaborates in numerous national and international long-term external research programmes outside UTCs. One of the biggest is Europe’s Clean Sky Joint Technology initiative – involving 54 companies, 15 research centres and 17 universities from a total of 16 countries – for which Rolls-Royce leads two of the propulsion-focused demonstrators designed to validate new engine technologies. Another pan-European collaboration in which it is partnered is NEWAC (see NEWAC Research) that has studied new aero-engine core concepts. 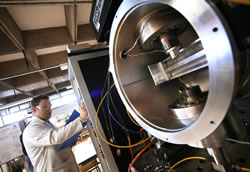 A test set up in the Metallurgy laboratory high temperature vacuum test chamber. It is used for the measurement of fatigue and crack growth data for high temperature (usually turbine) alloys © University of Birmingham

Over 600 people are working in the UTC network of world-class research teams at any one time. Over 350 doctorates are being supported by Rolls-Royce, mostly through the UTC network, around 400 technical papers are published annually by UTC staff independently or in conjunction with company engineers, and around 10% of patents filed by Rolls-Royce emerge from the network, with UTC staff invited to participate in the company’s patent rewards scheme.

With long-term funding, alongside privileged access to data, tools and people, universities secure continuity and stability as well as the real-world technical challenges so attractive to high-class research staff. In return, Rolls-Royce stays directly connected to cutting-edge academic capabilities, with access to world-class skills and highly motivated staff.