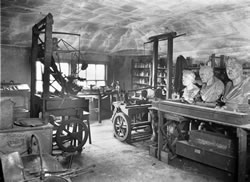 The workshop of one of the great names in British engineering – James Watt – has gone on permanent display at London’s Science Museum. The Scottish-born mechanical engineer who revolutionised the steam engine spent an increasing amount of time in what he called his ‘magical retreat’ after retiring in 1800. Effectively a time capsule, the room is frozen as it was in 1819, when Watt died aged 83, and contains a complete physical record of his working life and wide-ranging interests.

This ‘industrial shrine’ was locked and largely undisturbed for more than a century until Heathfield House, near Birmingham, faced demolition in 1924, at which point the workshop was itemised, dismantled and transferred to the Science Museum.

The faithful reconstruction includes all the furniture, floorboards, door, windows and skylight, together with more than 6,500 objects used or created by Watt. The workshop has been displayed previously but the public has never been invited inside until now: the museum’s latest interactive, multi-media exhibit reveals virtually all objects previously hidden inside drawers, at the back of shelves or under piles of tools.

Among workshop artefacts is the first model used to develop his separate condenser that cut fuel consumption by 75% and transformed the steam engine from a prime mover of marginal efficiency to the workhorse of the Industrial Revolution.

Watt’s far-reaching engineering vision produced an early rotary engine design – without piston or cylinder – that preceded the first production rotary engine by a century, and a model of a ‘rational factory’ probably used to plan layouts and gauge manufacturing workflow that predated Henry Ford’s production line approach by 100 years.

His legacy lives on in many ways, some more obvious than others. Engineers the world over utter Watt’s name daily, as the SI unit for power is named after him. Morever his image, alongside that of business partner Matthew Boulton, will soon sit in people’s wallets and purses as both men feature on the forthcoming £50 bank note.

Officially opened to visitors to the Science Museum in March 2011, there is more information about Watt’s workshop at: www.sciencemuseum.org.uk 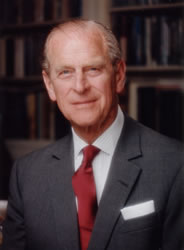 Prince Philip, the Senior Fellow of the Academy was instrumental in establishing the Fellowship of Engineering in 1976

It is 35 years since the Fellowship of Engineering was established to champion excellence in all fields of engineering and honour the UK’s most distinguished engineers. The pre-history of the Fellowship has been researched by Dr Peter Collins and his lecture on the subject can be seen at www.raeng.tv

The Fellowship, which became The Royal Academy of Engineering in 1992, celebrates its 35th anniversary on 11 June 2011, just one day after the 90th birthday of its Senior Fellow, HRH Prince Philip.

The formal launch of the Fellowship was at Buckingham Palace with Lord Hinton of Bankside OM KBE FREng FRS as first President. The new body comprised 129 founding Fellows as an authoratative body representing the many engineering disciplines.

Since then, it has gone from strength to strength. The number of Fellows has increased tenfold to over 1,400 and now includes honorary and international Fellows. Led by seven Presidents and progressing from its premises on Little Smith Street, Westminster to Carlton House Terrace, SW1, the Academy now commands an increasing level of political and educational influence.

To celebrate the 35th anniversary, the festivities began with the annual Academy Awards Dinner, where a display was mounted that documents the history of the Fellowship. The display features a number of Academy events over the next two months. These include two special lectures given by the Academy President Lord Browne in June and July titled ‘Resources for Humanity’ and ‘The Education of the Engineer’.

As part of its public celebrations, the Academy has joined with Cheltenham Science Festival to host seven events across the week-long programme (7-12 June) to engage visitors in the unique contribution engineering plays in today’s society.

Further information is available from: www.cheltenhamfestivals.com/science 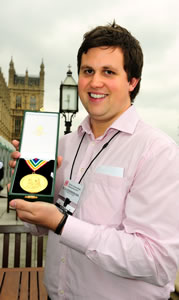 Dr Tim Stevenson was presented with £3,000 and the Westminster Wharton Medal at the House of Commons in March 2011

A University of Leeds engineer has won first prize for the excellence of his engineering research in the annual SET for Britain poster competition. The event was held in the House of Commons and attended by over 100 politicians, Dr Tim Stevenson, beat 59 other early-stage researchers by impressing a panel of nine expert judges to take the top award.

Dr Stevenson’s project, Magnetoelectrics; sparking new interest into a phenomena once thought to be poles apart, describes the development of new ceramics which could find wide commercial application.

Professor Chris Taylor FREng OBE chaired the judging panel which included eight Fellows from The Royal Academy of Engineering. He said: “The panel was impressed with the quality of the research, which uses advanced neutron scattering techniques to probe the structure of the material, and has the potential for practical use in applications as diverse as fuel injection in jet engines and data storage.”

SET for Britain was established in 1997 by the late Dr Eric Wharton and has since been organised by the Parliamentary and Scientific Committee with support from the Academy, the Institute of Physics, the Society of Biology, the Royal Society of Chemistry and the Society of Chemical Industry.

As well as engineering research, the competition also has categories for biological/ biomedical sciences and physical sciences.

Among the researchers in the competition was a 19 year-old engineer who stood out. James Popper, who does not begin his undergraduate engineering degree at Cambridge University until later this year came third in the competition. His ‘Cookersmart’ device, invented after an elderly neighbour almost died in a house fire, detects fires as they start, identifying the distinctive infra-red flicker of the flames rather than sensing the presence of smoke as with traditional fire alarms.