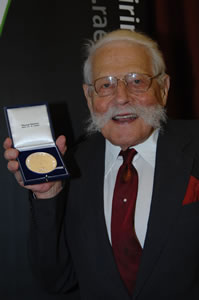 Dr Adam Neville CBE FREng, was presented with The Royal Academy of Engineering’s Sustained Achievement Award in 2008. He was awarded the Medal after devoting nearly 60 years to research and practice in civil and structural engineering worldwide

The article Self-Healing Concrete focusing on the work of Dr Henk Jonkers at Delft University in Ingenia 47 deals with an interesting problem – cracking in concrete. The important point though is that we should not be alarmed by flexure cracks in concrete, unless chloride ions have access to the crack and, through it, to the reinforcing steel. In any case, when the crack width is less than 0.2 mm it is not harmful, and it is possible to ensure that such a width is not exceeded by appropriate structural design, detailing of reinforcement and construction procedures.

The concern about the negative influence on the strength of concrete of including biological pellets is unwarranted because we can make high-quality concrete with lightweight aggregate by selecting an appropriate water-cement ratio. High-rise buildings do not require especially strong concrete: a large load is accommodated by an appropriate size of the concrete member.

We should also remember that much of the concrete in a typical beam, slab or column will not crack, remaining under compressive stresses throughout its life. Pellets dispersed through uncracked concrete are therefore simply wasted. Optimising the distribution of pellets in the concrete would significantly reduce the cost of their use, although it is not obvious how this could be achieved in practice. More research is needed.

The March issue of Ingenia carried an excellent article on the success story of ApaTech, under the appealing title: ‘Engineering Business Success’. ApaTech has indeed fully lived up to this accolade and to my mind is a great British success. ApaTech is based directly on knowledge transfer and IP arising from world leading science research at the Interdisciplinary Research Centre at Queen Mary University of London which received over £6 million of EPSRC funding between 1991 and 2002. Imagine then my disappointment that although the origins of ApaTech’s success lay with initial EPSRC funding, the role of the Engineering and Physical Sciences Research Council was not acknowledged.

EPSRC funding plays an important role in a number of business success stories and it is crucial that its role is recognised in order to preserve future public research funding. We endeavour to capture the impact of our investments over the years (whether they be academic, societal or economic) and have many examples of where research and training have generated significant benefit for the UK.

Novacem – a spin-out from Imperial Innovations Group plc – is another excellent example. An EPSRC funded project in 2004 explored the scope for designing a magnesium oxide-based, construction-quality cement with significant sustainability benefits. The company, created in 2007, received EPSRC follow-on funding to further develop carbon negative products and they plan to have an industrial scale pilot plant up and running this year, with the first volume production facilities operational from 2014/15. Novacem believes that, within 20 years, 25% of the cement the world relies on could be based on Novacem technology.

However, it’s not always clear what the applications of our funded research will be. For example, Andre Geim and his co-researchers have received over £9 million of EPSRC funding since 2001 which has ultimately led to the discovery and characterisation of graphene and won him and Konstantin Novoselov a Nobel Prize in 2010. Graphene is tipped as the natural successor to silicon and has many potential applications – from touch-screen technology to water purification.

Delivering impact is one of EPSRC’s key strategic goals and we are committed to promoting excellence, encouraging innovation, stimulating creativity and driving cultural, commercial and technological advances so that in the future we are at the root of even more success stories.

At a time when government is looking even more closely at the impact of the research it funds through the Research Councils and other agencies such as The Royal Academy of Engineering, we need to make sure that in bringing success stories to the public attention, we also acknowledge the key role of the long term research funding from which these arise.