The artist Jonathan Meuli has been given free rein to interpret and celebrate the work of the civil engineering profession in a series of paintings. He talks to Ingenia about the results of his collaboration with the Institution of Civil Engineers.

The Institution of Civil Engineers (ICE) has created a permanent artistic monument to the landmark civil engineering projects being built in the run up to the London 2012 Olympics and to Crossrail. The artist Jonathan Meuli has created 12 paintings for them that celebrate the engineering profession.

The paintings were put on permanent display at One Great George Street in January 2011 in areas accessible to the public and are viewable online. The project came about after Meuli approached the ICE and applied to its Research and Development Enabling Fund. The subsequent portfolio, entitled Painting a New London, rounds up infrastructure projects such as the Olympic Stadium, the Olympic Aquatics Centre and the piling for the Shard of Glass at London Bridge.

Meuli talked to Ingenia about the project from his first visits to sites tox the finished work on canvas.

Painting and engineering are both creative disciplines based on careful research – you start with an idea or a hypothesis and you experiment with how it might be best implemented until you reach a result.

When I moved to Glasgow in 1996 I began to paint large watercolours of the M8, which penetrates the heart of the city, and of the urban landscape. These paintings made me aware of the dilemma of painting something which may have great architectural and formal beauty (like motorway junctions or a line of pylons) but which may also have connotations of melancholy and alienation because of the way human beings interact with them.

I also painted the Glasgow docks, which, interestingly, despite having no greater aesthetic merit than the Glasgow motorway system, make a subject which is very popular with galleries and local art buyers, I think because it is imbued with nostalgia for a vanished era. 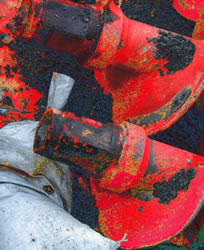 “One of my sketches. An image of augers from a photograph taken at Tottenham Court Road, where work had started on the new Crossrail station. Analysing photographs allows an exploration of the form of an object through colour and tone. Colour, line and tone are the building blocks of an artist’s vocabulary © Jonathan Meuli

For this project I made an online sketchbook based mostly on my own photographs. I travelled around East and Central London and walked for miles around tow paths and roads in search of viewpoints. Later I got access to the site thanks to the Olympic Delivery Authority. The photo-sketchbook was not so much about making a miniature version of the finished paintings or views but of developing ideas.

You can’t do all your thinking in your head; it’s good to do some on paper and in photography. The sketches are almost all manipulations of photographs using Photoshop – though some use old-fashioned crayons and pencil which were then photographed. It got me in touch with a wider range of subject matter and a varied vocabulary of colour, form, line and tone.

I wanted to animate the engineers more. It’s difficult to make someone sitting at a computer in an office look animated. Some of the poses are borrowed from the sibyls and prophets on the Sistine Chapel ceiling. I used a technique known as Contrapposto, used by Renaissance artists to bring a grace and variety into their figures by giving them asymmetrical poses (see Plainsong).

Drawing was particularly important in this project. I wanted to keep the drawing at the top of the finished work, not to bury it beneath layers of paint. For example, for the painting Originally, I downloaded plans and elevations of the new Crossrail Station at Paddington and used them as part of the subject matter.

All the titles are borrowed from poems by Carol Ann Duffy. These paintings are about something bigger than the hubris of construction projects; they are also about the creation of an urban environment in which people lead emotional lives, influenced profoundly by that environment. It seemed appropriate to cross-refer not to the making of a bridge but to feelings of an individual who might be crossing that bridge on a November day in 10 years’ time.

At the end of the day, the paintings had to both communicate to an engineer who knows how to design a roof compression truss and to someone who has never heard of trusses, but who is nonetheless awed by the construction of a skyscraper. Civil engineering is the shaper of landscapes and environments. People looking at the work will hopefully get some sense of my excitement at capturing these enormous works in progress.

See the sketches and paintings at: http://icepaint.wordpress.com

A look at recent innovations in sports engineering