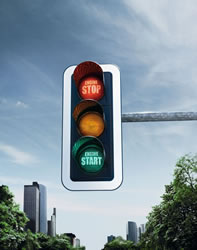 Car manufacturers worldwide are under pressure to deliver fuel-efficient vehicles that emit less carbon dioxide. The automotive technology arm of Bosch has successfully developed systems that automatically switch off vehicle engines during idling and have been installed in over a million cars to date. Antonios Katirtzidis, product manager at Bosch, explains how start/stop systems can significantly reduce both fuel consumption and emissions.

Start/stop systems that automatically shut down and restart a vehicle’s internal combustion engine to reduce the engine’s idling time have been under development since the 1970s. First added to the Volkswagen Polo and Fiat Regata in the 1980s, they did not achieve commercial success at the time as drivers found the technology disconcerting and the systems were too expensive.

In the last few years the importance of the technology has increased dramatically. Climate change means that car manufacturers are eager to shave every last percent off a vehicle’s carbon dioxide emissions while soaring oil prices make fuel economy an important criterion for most car owners. Start/stop systems have responded to these needs.

Bosch’s start/stop system was first introduced in March 2007, when integrated into BMW Series 1 petrol and diesel models. Four years later, more than two million of these starter-based start/stop systems have been supplied to BMW and Mini, as well as other manufacturers including Fiat, Porsche, Audi and Volkswagen. By 2013, it is expected that every second newly-registered vehicle will come equipped with a start/stop system, so how do they work? 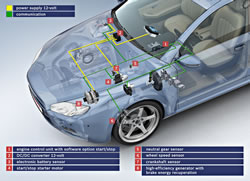 Figure 1: The Bosch start/stop system is based around existing components from a conventional drive-train so that car manufacturers can integrate the system more easily into existing vehicle set-ups. The functions for controlling the engine start and fuel combustion are integrated into the engine control unit ensuring that the engine switches off when the car comes to a standstill. The charge of the battery is monitored by a sensor checking that the vehicle’s electrical system always has sufficient reserves of electrical energy © Bosch

The key elements of the start/stop system are a reinforced starter motor or ‘start/stop starter motor’, an array of sensors including the battery, neutral-gear, wheel-speed and crankshaft sensors, a 12V DC/DC converter and the Engine Control Unit (ECU). This system was specifically designed using existing car components so that it could be installed quickly and cost-effectively and be adapted to different engines and vehicle types by individual automotive manufacturers (see Figure 1: The start/stop system).

The starter motor is a prime example of a systems approach. Today’s hybrid vehicles use an integrated starter-generator (or starter-alternator) which replaces both the starter motor and generator/alternator in a conventional drive-train. Typically, this electrical component is installed between the engine and gearbox and is linked directly to the crankshaft. It is a ‘bi-directional energy converter’ in that it acts as a motor when powered by the battery, offering a much faster start than the conventional 12V starter. It also generates electric power when driven by the engine and charges the battery.

However, while the integrated starter-generator can cut fuel consumption by as much as 20%, it is difficult to install to a vehicle’s drive-train, and importantly, too expensive for the start/stop system in petrol or diesel driven vehicles. To counter this, the starter motor and generator remain separate components in the Bosch start/stop system and are still externally mounted onto the engine. However, each has been re-structured to withstand the increased number of engine-starts in a start/stop vehicle.

The start/stop system can be used with a vehicle’s existing generator, which will power electrical components and charge the battery while the engine is running. However, Bosch has also designed an efficient generator to accompany the reinforced starter motor that can charge the battery quickly, so very soon after each restart, sufficient electrical energy is available to ensure another restart after the next stop.

The vehicle’s battery is also a crucial part of the start/stop system. It will have to withstand a greater number of starts than the battery in a standard vehicle as well as provide power for ancillary applications, such as seat-heating, when the engine is switched off.

To this end, so-called enhanced flooded Batteries or absorbent glass mat batteries can be used. These are already widely utilised in heavy-duty vehicles such as fork-lift trucks that need to draw high levels of current from a battery. Based on conventional lead acid cells, these batteries have been designed with thicker electrodes, can be charged more quickly last longer and provide at least twice the cycle life of standard lead-acid batteries.

A 12V DC to DC converter has also been integrated into the start/stop system. Now, when the starter motor is activated, voltage decreases across the vehicle’s electrical system, which may affect the operation of electronic equipment such as satellite navigation or the radio. The DC/DC converter stabilises voltage levels, avoiding intermittent malfunctions of connected electronic devices.

For the start/stop system to operate smoothly, the car manufacturer must integrate additional control software into a vehicle’s engine control unit. This does not require the ECU to have additional processing power or memory. The software will analyse all relevant data transmitted from the vast array of wired sensors fitted across the vehicle. For example, sensors fitted to each wheel of the vehicle – already used in anti-lock braking and electronic braking systems – will transmit speed data back to the ECU. The car manufacturer will also integrate additional switches to monitor the gear lever and clutch pedal or brake positions. Together, these will signal to the ECU when to switch off the engine.

A crankshaft sensor registers the attitude of the crankshaft and positions of the individual cylinders within the engine, so as soon as the driver releases the clutch or brake pedal to restart the vehicle, the engine management system can determine which cylinder to inject with fuel and which cylinder to ignite. Direct fuel injection also means that the engine can be quickly accelerated up to idling speed, halving the starting time of the engine.

A battery sensor to measure the charge and condition of the battery is a crucial part of the system. It improves battery performance by first recording current, voltage and temperature and then uses integrated software to calculate charge as well as predict future battery states. This information is relayed to the ECU and ensures that the engine is only stopped if the battery has sufficient capacity to restart the engine again quickly. So if the battery is too weak, the start/ stop system will not switch off the engine during idling. 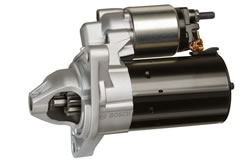 Work on the current start/ stop system first started at the beginning of the last decade, with the final system being introduced to an automotive industry some seven years later. The real innovation behind the technology has been the systematic approach taken by the engineers who developed it. Components already integrated in modern vehicles have been redesigned and combined with sensors and switches to provide a system that is relatively easy to install, and starts and stops an engine quickly and efficiently. For example, a warm start only consumes as much fuel as 0.7seconds idling time.

Engineers are now developing the system to enable it to switch the engine off earlier, when the vehicle is about to stop. If, say, a driver has already depressed the clutch and is braking, the engine could be switched off before the car reaches a standstill.

A further step could be to develop a start/stop ‘coasting mode’ in which the engine is switched off while the car is cruising, with the driver’s foot off the accelerator. The Porsche Cayenne Hybrid, for example, has this mode integrated into its hybrid drive-train. Installing free-wheeling to petrol and diesel vehicles could be next.

How does that work? - Eddy-current braking