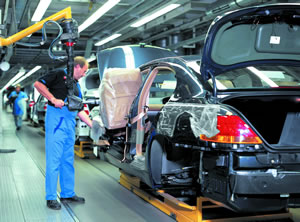 Tags (transmitters) are positioned on individual vehicles to enable the production teams to track parts and cars around a production floor. In this BMW plant, a tag (ringed in red) can be seen on the car bonnet © Ubisense

Locating people and objects outdoors using the satellite-based Global Positioning System (GPS) has become commonplace now mobile phones have built-in receivers. Buildings partially block these signals so the next stage, according to Ubisense, is to make indoor location as ubiquitous as GPS.

Ubisense was formed in Cambridge UK in 2002 to develop indoor location technology based on Ultra Wide Band (UWB) radio, a type of low power radar that works by transmitting precisely timed short pulses of digital data across a wide (greater than 500 MHz) spectrum of frequency channels. Because UWB transmissions use very short pulses compared to other radio signals, they can precisely pinpoint objects inside buildings at distances of up to 150 m.

Richard Green, CEO of Ubisense, explains that his company’s way of processing UWB signals gives an indoor location accuracy of around 15 cm in three-dimensional space, making it ideal for tracking parts and people in production facilities. Airbus, BMW, Boeing, EDF Energy, Honda, Porsche, Toyota, and Shell use Ubisense’s systems, which are located on mobile tags that transmit 6-8GHz signals to fixed sensors (distributed inside the facility buildings) that contain arrays of UWB receivers.

Ubisense makes these with off-the-shelf radio chips in combination with patented software algorithms that calculate tag locations in real time from the angle the tag signals arrive at the sensors and the time its takes them to travel there.

Ubisense’s largest installation is the BMW Mini assembly plant in Oxford. “We use a combination of high-fidelity UWB plus information from RFID tags and GPS to track in real time which cars are on what production line down to the tools being used on cars at specific times,” says Green.

Now the company is working on bringing indoor location to mobile phones, tablets and other consumer gadgets so that everyone can use navigation and location services indoors. Shopping centres, museums, and exhibition halls including Excel London are already showing interest in adding the technology to their buildings.

Mobile handsets could be made indoor location-aware with little more than a software upgrade and a UWB transmitter chip costing less than £3, says Green. “We are already using technology from our Cambridge neighbours ARM and Cambridge Silicon Radio who have very close relationships with all the main mobile handset makers.”

HOW DOES THAT WORK? - 3D Vision

The evolution of 3D visuals from Victorian stereograms to holograms.

How low-power, high-performance processors are driving smartphone and tablet development

Restoration of the Forth Bridge