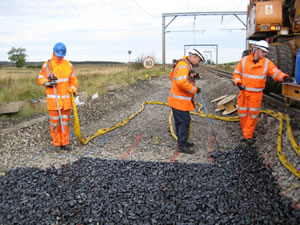 XiTRACK is applied to ballast as a liquid polymer. It sets within 20 seconds and forms a 3D cage, harnessing the separate rock particles and allowing controlled movement.

One regular challenge facing railway track engineers is that of track movements caused by ballast shifting under the rails. A liquid polyurethane has been developed that gels around ballast rocks, forms an open geocomposite and stabilises the rails.

A decade ago, Peter Woodward, Professor of Railway Geotechnical Engineering at Heriot-Watt University, developed a way to reinforce and stabilise railway tracks using polymers. He was studying how ground waves generated by the interaction of a train with the track made the close-packed, crushed rock (known as ballast), on which most railway sleepers lie, move over time.

Professor Woodward explains that as the ballast shifts, the track moves out of alignment and trains no longer run smoothly. Where forces are greatest, such as junctions where lines diverge or converge, the ballast might need to be packed back into place every few months, causing network disruption, passenger delays and ongoing maintenance costs.

Woodward’s innovation was to apply an advanced polyurethane polymer to the ballast to hold it in place and act as a damper against the vibration. When it was first used in 2001 at Bletchley on the West Coast Main Line, it virtually eliminated the need for track and ballast maintenance.

The technology is now used under the name of XiTRACK installed by Balfour Beatty Rail. Installations include Clapham Junction, the East Coast Main Line, Coble Fret Ferry Port and most recently the East London Line, as part of the infrastructure of the London Olympics. The technology has also been applied to tracks in Italy, with trials expected shortly in Germany, Hong Kong and America.

Trains running at over 250 mph are thought to be an important part of the future of rail and XiTRACK is likely to be an enabling technology. As part of further research funded by the Engineering and Physical Sciences Research Council, Woodward’s team is now developing software to model ultra high-speed train/track interactions including the smoothness of the ride. “Every type of ground has a natural velocity and when a train speed reaches it, interactions between the train and the track set up resonant vibrations. The plan is to model various stabilisation track technologies to stop that ground vibration,” he says.

Engineering and STEM clubs in schools are on the rise, engaging a diverse range of students with projects involving robotics, smart materials, and programmable devices

HOW DOES THAT WORK - From Bar to QR

How we use machines to code, scan and capture increasingly complex optical data

What's so clever about Smart Cities?

The availability of cheaper sensors, mobile communications and data processing have opened the door to smarter cities and infrastructure