Winner of the Design of the Year Award, the London 2012 Olympic Torch is a golden cone with the flame burning through its perforated shell. Designed for its looks, functionality, portability and safety, the Torch was engineered and tested in time for 8,000 relay runners to take it around the UK this summer. Ingenia talked to those integral to its development including Jay Osgerby who, alongside Edward Barber, co-designed the Torch.

The Torch Relay that opens each Olympiad begins at the Temple of Hera in Athens, the birthplace of the ancient games, when the Sun’s reflection from a parabolic mirror lights the Olympic flame. The Torch completes a relay around Greece before travelling to the host country, where it is carried by people who have distinguished themselves in their communities or led inspirational lives.

The Olympic Torch symbolises peace, unity and friendship. Since the Torch Relay’s creation in 1936, the design of the Torch has also been an opportunity to celebrate the host country, often incorporating national characteristics into the design. For example, the Athens design for the 2004 Games incorporated olive wood into its base and olive oil into its fuel system, in honour of the city’s official tree, favoured by its mythical founder, the goddess Athena. The Torch for the 2006 Winter Games in Turin was designed to resemble a ski and a mountain slope, as a tribute to the alpine region. The 2012 Torch is classic in form, but with its cutting-edge engineering and manufacture, represents the UK as a hub of design and innovation.

High-specification engineering is crucial to the Torch’s success: it must burn brightly and operate under extreme weather conditions while adhering to rigorous safety standards. 8,000 of them, one for each runner, must be produced under strict quality controls in a short timeframe. The design for 2012 brings together the best of the UK’s design and engineering expertise.

In August 2010, The London Organising Committee of the Olympic and Paralympic Games (LOCOG), in conjunction with the Design Council, announced an international competition to design the Torch for the 2012 Olympic Games. LOCOG asked interested firms to submit ideas and portfolios of their work. They received 1,000 submissions of interest, of which five were shortlisted and given just 10days to conceive a design. Of these, LOCOG declared award-winning London-based designers Edward Barber and Jay Osgerby to be the competition’s winners. 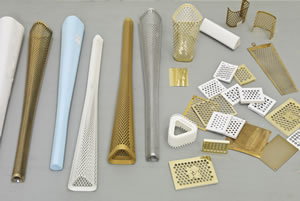 At the initial design stage, blue solid foam models were created to obtain general form and proportion. SLS (rapid prototype – 3D print) versions were made early on to see how the layering of the skins/perforation pattern worked, as well as the overall Torch size © Barber Osgerby

Ever since it was announced that London would host the Games, Barber and Osgerby knew they wanted to be involved. In particular they wanted to design the Torch, one of the few objects that forms part of the Games’ legacy. Their design concept was for a trilateral form, developed in recognition of a pattern of trinities in the history of the Olympic Games: this is the third time that London has hosted the Olympic Games (1908, 1948, 2012), and the Olympic motto is ‘faster, higher, stronger’.

Barber and Osgerby wanted to design something which felt like a piece of modern lightweight, high-performance sporting equipment – like a baton. Aluminium alloy was used to form the Torch skins, because it is incredibly light, strong, tensile, and also recyclable. The skins are perforated with 8,000 holes – each hole representing a torchbearer in the relay.

These holes were as critical to the function as they were to the narrative. The shape of the Torch, coupled with the texture of these perforations, makes it easy to grip. The hole pattern also allows heat to quickly dissipate without conducting down the handle of the Torch, and reduces the Torch’s overall weight, making it one of the lightest ever.

Rough prototypes of the Torch’s shape and form were created in foam. These were progressed to foam models with the application of the hole pattern in paper, followed by technical drawings, selective laser sintering (SLS) models, and perforation studies.

Barber and Osgerby chose a gold finish for their design, which felt appropriate for the Olympics, reflecting the gold medals which are the highest accolades any sportsperson can achieve.

A gold finish would also reflect the colour and brightness of the flame. Impressed, LOCOG awarded them the design contract in October 2010. The primary design work had to be completed by December, when a design freeze would be declared, and the design data handed over to begin the engineering process.

During this period, LOCOG recruited the engineering firm TECOSIM UK, Basildon-based specialists in automotive development, to work with the designers to prepare the Torch for manufacture. They collaborated on an iterative process of computer-aided engineering (CAE) and 3D modelling to find solutions that satisfied both engineering requirements and design goals.

With the design finalised, the next hurdle was delivering a torch for each relay runner in time for the Games. TECOSIM achieved this by developing a two-part skin panel that would allow laser welding and Coventry-based The Premier Group were chosen to manufacture the torch skins. The group came up with a skin that could be delivered from a single blank sheet of aluminium.

Lasers cut holes along the metal sheets on what would be the faces of the torches with holes omitted in the areas where the seams would be welded; this allowed a solid band for the weld joint. After the welds were made and cleaned, the missing holes were cut by laser, neatly hiding the weld seam. In addition, the excess aluminium that was removed to make the holes was melted down and recycled.

The relay runner’s safety was paramount at all stages of Torch design and manufacture. The precision of the laser cutting was essential, as a stray hole out of register, or cut unevenly, could potentially affect the torch performance and aesthetics. The multi-stage forming process used to make the skin panel ensured a high level of precision cutting and testing to prevent this.

The burners housed inside these skins posed their own engineering challenges. LOCOG and the Torch development team from TECOSIM had been impressed by the work of burner manufacturing firm Bullfinch, which had produced 250beacons to line the length of Hadrian’s Wall to celebrate the 1,600th anniversary of the end of Roman rule in the UK in 2010.

The team’s task was to deliver a burner with a flame visible for 200 m in bright sunlight, which would last for at least 15 minutes, and remain lit in temperatures from 40°C to below freezing point (-5°C). Adding to the challenge were the limits placed on the burner’s fuel capacity by the Torch’s shape and by the need to keep the Torch as lightweight as possible. They developed a small cartridge made up of 60% propane and 40% butane (see Fuelling the Torch). 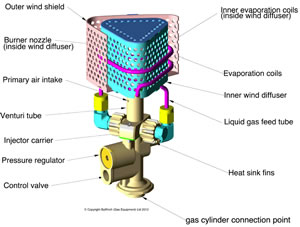 Schematic of the burner mechanism. The coils are wrapped around the burner nozzle to preheat the fuel so it does not separate © Bullfinch

With the burner and skin in place, it was time to test the Torch to confirm the results of all of the CAE testing and 3D modelling performed before production. Torches were benchmark-tested against the Turin Torch, which had extinguished the fewest times in Torch Relay history. The London 2012 Olympic Torch would need to keep alight in wind, rain, and snow: specifically, all the elemental challenges possible during a British summer.

Flame ignition tests (to ensure the Torch can achieve flame ignition during the ‘kiss’ between torches) and flame performance tests (to ensure the Torch can generate and maintain a stable flame, visible to up to 200 m) were conducted by TECOSIM within the BMW Energy and Environmental Test Centre in Munich. In addition to the temperature parameters, the Torch needed to meet LOCOG’s requirements to operate robustly at a constant wind speed of 56 kph; during a five-second wind gust of 80 kph; under conditions of rain or snowfall at rates of 50 mm/h, and to be carried at altitudes of up to 1,220 m above sea level.

The Torch was also tested for safety: it was drop tested to ensure it would remain functional and cause no harm if dropped from height onto a concrete floor, and that its fuel supply could safely be turned off. The results of the physical drop test correlated perfectly to the CAE development work conducted by TECOSIM. Heat management and decommissioning tests were performed to ensure that its surfaces would not exceed the Royal Society of the Prevention of Accidents’ standard for temperatures of touchable surfaces.

For 70 days, from 19 May to 27July 2012, 8,000 torchbearers will carry the Torch as it travels across the UK on a route that will pass within 10 miles of 95% of the population. The flame will travel by boat, bicycle, cable car and abseil rope as the relay visits 1,018 locations, including Jodrell Bank observatory and Stonehenge. The BBC will broadcast the event live as the Torch completes its journey.

The finished Torch is 80 cm tall and is one of the lightest Torches in the history of the games, weighing around one kilogram. This is thanks to its perforated design, and because it is made of an aluminium alloy developed specifically for its lightness for applications in the aerospace and automotive industries. Half of the relay runners will be between 12and 24 years old, so the Torch had to be light enough for the youngest and smallest torchbearers to carry easily while still being visible in a crowd.

The Design Museum gave the Torch its ‘Design of the Year Award’ in April 2012 and it has received plaudits as a carefully conceptualised object, a triumph of both design and engineering.