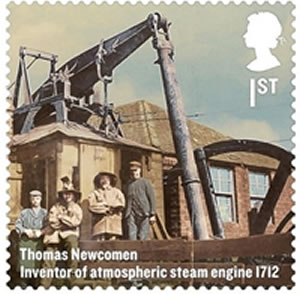 A Newcomen stamp issued in 2012

The Newcomen Society, the International Society for the History of Engineering and Technology, is holding a number of events celebrating power and energy to mark the tercentenary of Newcomen’s steam engine, which kick-started the industrial revolution. These events include two conferences: The Nuclear Industry – Learning from the Past and looking to the Future, which will be held on 27 June in Manchester, and The life and works of Thomas Newcomen, on 12-13 July in Dartmouth.

Thomas Newcomen set the first-ever successful steam engine to work at Dudley in the West Midlands in 1712. He was an ironmonger from Dartmouth who wanted to drain the deep flooded levels of mines and make available vast untapped mineral and coal deposits. There had been earlier attempts to harness the power of steam but none of them had developed into machines that could be used for commercial purposes.

Newcomen constructed a pivoted beam, one end driving a pump rod and the other being driven by a piston in a vertical cylinder. Steam admitted below the raised piston was condensed to create a vacuum into which the piston was forced down under atmospheric pressure, raising the pump rod at the other end of the beam, and drawing up the water. Newcomen’s ‘atmospheric’ engine spread over Britain and across Europe.

In 1781, James Watt introduced a crucial modification to Newcomen’s original concept, converting reciprocating into rotary motion, enabling the driving of a shaft. From this moment onwards, the steam engine became the machine that powered the manufacturing and industrial might of the 19th century, leading to the modern industrial age.

There will be a demonstration of the replica steam engine of 1712 on 14 July at the Black Country Museum.

Visit www.newcomen.com
for more information about these events. 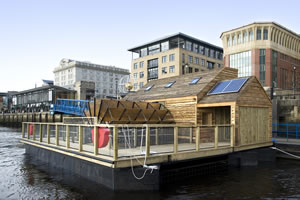 Since March, a floating tidemill that links a 4.5 m high mill wheel with the ebb and flow of the Tyne to generate electricity has been showing visitors the strong and close links between art and engineering. ~Flow has been powering lasers, filters and sensors to activate three onboard musical instruments.

Located on the quayside in Newcastle, and commissioned as the North East’s Artists taking the lead Cultural Olympiad submission, ~Flow is one of twelve public artworks funded by the UK Arts Councils to coincide with the 2012 London Olympics. Further funding came from Ingenious, The Royal Academy of Engineering’s grant scheme for creative public engagements.

The project is a collaboration between Ed Carter and Owl Project. Ed Carter is a music and arts producer and director of Modular – specialists in devising and producing large-scale, interdisciplinary art projects; Owl Project are three Manchester-based artists who shaped ~Flow’s aesthetic, creating the bespoke musical machinery onboard. The river instruments are hand-crafted largely from wood to make a wide range of sounds depending on variable factors such as tide levels, the speed and direction of the river’s flow, and the salinity, turbidity and chemical composition of the water.

The sounds made depend on how muddy the water is, with gears and cranks driving a laser that directs a beam of light through the water. The sequencer stores and ‘plays’ river samples collected hourly, delivered by a wooden conveyor belt, with electronic sensors determining the instrument’s pitch according to the salt content of the samples.

Members of the public – who are themselves able to alter the sounds on wooden mixing desks – can visit the tidemill for free, and ~Flow will continue to stage regular themed events through September, programmed by North East-based cultural producers Beth Bate and Tom Higham - see www.flowmill.org for details. 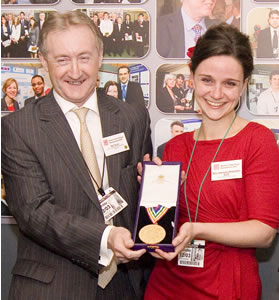 On 12 March, the annual SET for Britain poster competition took place at the House of Commons and was attended by over 100 parliamentarians. The awards aim to draw parliamentarians’ attention to the UK’s thriving science and engineering base
as well as reward first-rate research being undertaken in UK universities.

There were 60 entries in the engineering category. Jeannette Heiligers, a PhD engineering student at the Strathclyde University, won the gold medal and £3,000 prize for her ‘pole sitter’ concept, where an onboard propulsion system keeps a spacecraft stationary over one of the Earth’s poles instead of in orbit, to better monitor climate change.

Simon Leigh, a post-doctoral researcher at the University of Warwick, won the silver medal and £2,000 prize for his research which has shown that it is possible to produce a wide range of structures by developing new materials and processes for 3D printing. These include sensors to measure fluid and gas flow, which can be printed out in 3D using a new magnetic composite material.

Jonathan Dewsbury, a geotechnical engineer at Buro Happold Ltd., won the bronze medal and £1,000 for his research, in collaboration with the University of Southampton. It comprised advanced numerical modelling to demonstrate the impact of using old foundations in building projects. The system allows the building, foundations and soil to be modelled simultaneously. This could lead to lower construction costs, a potential decrease in programme time and a reduction in CO2emissions.

The event was organised by the Parliamentary and Scientific Committee with support from the Academy, the Institute of Physics, the Society of Biology, the Royal Society of Chemistry and the Society of Chemical Industry. Academy President Sir John Parker addressed the audience during the winners’ ceremony and praised the event for encouraging engineering innovation that contributes to the UK’s economic growth. 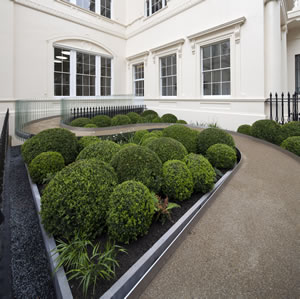 In April 2012, the Royal Academy of Engineering’s premises reopened, following a nine-month project that has transformed the Academy’s public space and visitor facilities.

The public rooms on the ground and first floors will be collectively referred to as the Forum for engineering. This reflects the Academy’s aspiration that the venue will act as a focal point for the engineering profession and contribute towards raising the visibility and recognition of engineering. A programme of engineering events and activities is in development, including an international conference and exhibition on rehabilitative and sports engineering that will coincide with the London Paralympics, and a series of activities during the September 2012 London Design Festival. The project was made possible by a fundraising campaign, led by Academy President Sir John Parker FREng, which raised the £6.5 million required.

The Forum has been created at numbers 3 and 4 Carlton House Terrace in London. Carlton House Terrace is listed Grade I and forms part of architect John Nash’s ‘Grand Project’ prepared in 1827 to provide a new route linking Regent’s Park and Waterloo Place. Part of the Academy’s design objective in refurbishment was to remove unsympathetic 20th Century alterations and reinstate the scale and integrity of the principal rooms at the ground and first floors.

The Forum now provides four large multi-use rooms at ground level, which are suitable for exhibitions, receptions, meetings and dining, and can be used individually or as a suite. A 170-seat lecture theatre is located on the first floor, together with an overflow lecture theatre/meeting room and associated breakout space. Every room has been equipped with high specification AV systems with close attention paid to the acoustic dynamics of the rooms.

The Academy set high sustainability standards for the refurbishment. Energy efficient features include rooms that allow natural ventilation when external conditions are appropriate, with heat recovery provided on a mechanical ventilation system. The use of a mix of LED and compact fluorescent lamps, low energy lighting, and a building management system allows flexible room control to match daily building usage and minimise energy demand. In order to minimise cooling loads, the Academy has accepted a wider range of internal temperatures than standard, which reduces reliance on terminal cooling units. In addition, provision has been made to allow for future improvements, including planning permission for a roof-mounted solar thermal system to be implemented when the existing boilers are replaced.

To provide a single accessible entrance for all visitors to the Forum, a new sinuous bridge and ramp were designed, rising gradually across the forecourt to make up the one-metre level difference between the pavements and reception. The bridge was constructed in stainless steel plate, fabricated in triangular hollow section and the planting scheme is by Andy Sturgeon, a five-time Gold Medal winner at the RHS Chelsea Flower Show.