The Raspberry Pi was oversubscribed 20 times when it launched in April 2012. It is hoped that this credit-card sized computer will fire the imagination of youngsters and play a role in moulding the curriculum in schools and colleges by emphasising the value of creative computer programming in ICT teaching. 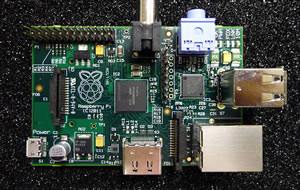 Six years ago, Eben Upton began developing the idea for a single-board computer while working as a director of studies at the University of Cambridge. The chip designer and programming advocate had noticed a decline in the programming abilities of computer science applicants coming to the university.

He and others felt that computer science, fundamental to many subjects, had slipped off the educational curriculum to the point where ICT teaching was focused on learning about the functionality of established programs like Microsoft Word and Excel rather than what could be done to utilise computers creatively.

He gathered a team representing the broader UK computing community and founded the Raspberry Pi Foundation, a registered charity, to promote programming education. It received support and input from educators who are now among the early customers for the device.

Using money generated by their trustees, the Foundation’s researchers have developed a small PC that is able to plug into a TV and a keyboard. It comprises a 256 MB processor with graphics capability plus audio and video input and mouse/keyboard connections. Its processing power is roughly equivalent to Apple’s second generation iPhone 3G, which was released in 2008.

Eben Upton says: “It can be used for many of the things that your desktop PC does, like spreadsheets, word processing and games and can play high-definition videos.” The Foundation’s intention is to offer two versions: one at $25, with one USB port, and one at $35 which has two USB pots and an ethernet port.

The design does not include a built-in hard disk, relying on an SD memory card format for booting and long-term storage. The Arch Linux ARM and Debian Linux operating systems are freely available, affording access to programming environments such as Scratch and Python. It is this system that allows people to experiment and will hopefully inspire a new generation to develop their programming skills.