View videos of the finalists here

The Royal Academy of Engineering MacRobert Award is the UK’s premier prize for innovation in engineering. It is awarded annually for an outstanding example of innovation of benefit to the community, which has also achieved commercial success.

It seeks to demonstrate the importance of engineering and the contribution of engineers and scientists to national prosperity and international prestige.

The award was founded by the MacRobert Trust and first presented in 1969. Every submission is reviewed by a panel of judges drawn from the Academy’s Fellowship and from all areas of engineering. The Award honours the winning company with a gold medal and the team members with a prize of £50,000. Here we showcase the three finalists for the award in alphabetical order. The winner will be announced at the Academy Awards Dinner on 26 June 2012. 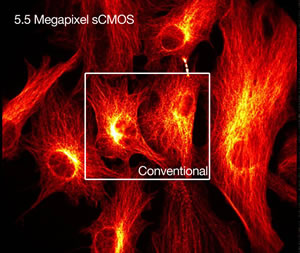 Andor Technology plc is a global leader in the manufacture of high-performance scientific
imaging cameras, spectroscopy solutions and microscopy systems for research and OEM. Andor was the first to bring Electron Multiplying Charge Coupled Device (EMCCD) imaging to the market and continues to set the industry performance benchmark for this technology. The Neo sCMOS (scientific complementary metal–oxide–semiconductor) builds on this technology leadership, providing a low noise, high-speed camera with high resolution and large field of view for ultra-low light research.

The resultant images from the sensor, developed with Fairchild Imaging, are processed in real time using innovative processing algorithms to remove fixed patterns, sporadic noise and achieve linearity of response and image uniformity. The 5.5 Megapixel platform runs at groundbreaking speeds of 100 frames per second, achieving data rates approximately 40 times faster than those of the conventional leading interline CCD camera, meaning that it is processing data in real time equivalent to one DVD movie every second up to 1.1 GB/s.

The Neo combines this processing capability with unique vacuum technology (UltraVac™), delivering a long-life vacuum chamber on the camera which enables deep sensor cooling to -40°C, significantly reducing the noise floor and enhancing sensitivity. This deep cooling also reduces intrinsic pixel blemishes by an order of magnitude, with the combined result being unmatched image quality.

The camera’s sensitivity is crucial to reducing the amount of excitation light that the fluorescently tagged cells are exposed to, significantly reducing phototoxicity effects and hence extending cell life. Andor’s customers have commented that the Neo signifies a quantum leap forward in opening up new possibilities in research.

The Neo sCMOS was launched in December 2010, targeting a large mid-price segment of the scientific research and OEM market. It is set to replicate the success of Andor’s pioneering iXon EMCCD product range. The recognition of Andor’s brand and reputation in engineering and quality has facilitated rapid market acceptance and has meant significant sCMOS volume shipments topping £4million in the first year of sales.

Andor’s products are predominantly aimed at scientific research markets to help scientists understand the physical world and the building blocks of life. End applications include rapid 3rd generation human genome sequencing, based on single molecule detection techniques, which are expected to facilitate sequencing of the entire genome in a few hours and lead to personalised medical care.

In super-resolution microscopy, the technology allows scientists to resolve cell components beyond the optical diffraction limit (typically 250 nm) of their system to sub-80 nm. In general, a significant part of Andor’s customer base studies diseases such as cancers, heart disease, Alzheimer’s and Parkinson’s with the aim of providing effective therapies.

The combined performance parameters of the Neo sCMOS also appeal to the scientific astronomy community, with uses in solar astronomy, facilitating several areas of ground-based observation that require rapid frame rate response, such as adaptive optics and analysis of transient events. 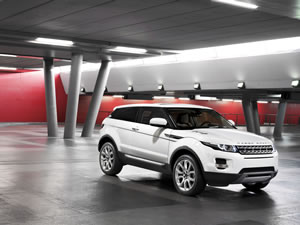 Land Rover have taken a concept car from prototype to manufacture and created a new vehicle category with the Evoque. Along the way they have incorporated environmentally friendly materials into a space-saving, fuel-efficient design.

When Land Rover’s LRX concept car – a prototype forerunner of the hugely successful new Evoque model – was unveiled at the 2008 Detroit Motor Show, the enthusiastic reaction inspired the company to put the bold design into production virtually unchanged.

That meant overcoming engineering and design challenges to maintain the LRX’s contemporary styling while also retaining the marque’s reputation for ‘go anywhere’ all-wheel-drive cars. In so doing, Land Rover has succeeded in creating an entirely new market segment: a premium, off-road coupé as opposed to a more utilitarian all-terrain vehicle.

One of the biggest hurdles was maintaining the vehicle’s low stance and compact dimensions while offering the interior space and off-road capability expected of a Range Rover. A further challenge was developing a five-door model alongside the coupé that shared the LRX’s styling while offering greater versatility.

Engineers designed new front and rear suspension systems and chassis frames, an optimised exhaust system and ultra-high strength boron steel body structure – boron being added to steel to improve its cold-forming properties, hardenability and weldability. The fuel tank was designed to utilise every millimetre of available space in order to achieve the desired 70-litre capacity.

The company’s engineers developed a number of technologies new to the off-road sector, including Magneto-rheological shock absorbers, allowing the damping characteristics of the shock absorber to be continuously controlled by varying the power of an electromagnet.

The Evoque also features the latest evolution of Land Rover’s award-winning Terrain Response programme – which allows the driver to adjust the vehicle’s suspension and transmission settings – and Hill Descent Control, which automatically controls the forward speed on steep slopes. A five-camera surround vision system displays the immediate environs of the car on the dashboard’s central screen, which can be operated using touch-sensitive technologies.

The Evoque was the subject of a comprehensive internal life cycle analysis to minimise environmental impact. This study made the Evoque one of the few cars to receive accreditation from the UK’s Vehicle Certification Agency.

Manufacturing methods used to reduce its environmental footprint include trim fabrics made from recycled plastic bottles, aluminium trim parts made from 95% reclaimed metal and more recovered materials used in the wheel-arch liners, engine covers, undertrays and even speakers.

The development of highly efficient new powertrains allied to stop/start engine technology helped make the Evoque the most efficient Range Rover to date with CO₂ emissions as low as 129 g/km and fuel consumption of 56.5 mpg.

A meticulous weight-saving approach has further increased efficiency, with plastics used for the front fenders and tailgate, aluminium bonnet and roof, magnesium cross-beams and ultra-light speakers. Other losses in efficiency have been minimised by the use of electric power steering, low rolling-resistance tyres, regenerative charging and a reduction in drag over the LRX concept.

The Evoque’s success includes over 22,000 orders placed before the car entered dealerships and more than 100 awards worldwide. Production at Jaguar Land Rover’s manufacturing plant in Halewood, Merseyside has been increased to three shifts a day. Evoque manufacturing at the plant will create additional employment and safeguard 40,000 jobs within JLR and the wider economy. 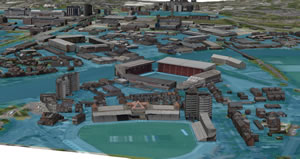 Flooding causes huge damage and great hardship worldwide. In England alone, one in six homes is at risk, with annual damage costing more than £1billion, while many infrastructure assets and public services are in flood risk areas.

Flood risk is managed through a combination of investment in flood defences, development planning and insurance. All of these activities depend on accurate and detailed flood risk mapping, based on computer modelling. JFlow is a software system that provides specialist flood modelling developed by the UK company, JBA.

In 2006, JBA made a breakthrough by pioneering the use of graphics processing unit (GPU) technology to improve the speed and efficiency of the JFlow model. GPUs were originally dedicated parallel processors, designed purely to accelerate computer graphics and video games. As the technology advanced, JBA realised that it would be possible to transfer its flood modelling code onto a GPU and thus benefit from significant productivity gains.

By 2007, JFlow could be run up to a thousand times faster than before, by exploiting mass-market consumer technology that cost only a fraction of a conventional supercomputer. The improvement in performance led to a step change in flood modelling, with national flood maps now available in unprecedented detail, enough to model the flow of water in individual streets and around specific buildings.

The JFlow system has achieved commercial success delivering maps and analytical products that underpin assessments of flood risk for many clients. It was used in the production of the Environment Agency Flood Map in England and Wales, and JFlow outputs are widely used by insurance companies, including the top five UK insurers by market share.

Other users include international reinsurance, catastrophe modelling and reinsurance brokerage sectors. Applications include national flood risk maps and data for Ireland, France, Germany, Poland, the Czech Republic, Slovakia, Hungary, Belgium, Luxembourg, and recently for Thailand, where the flooding in 2011 was the fourth largest insurance loss event in history. JFlow has enabled JBA to become a world leader, modelling more rivers in more locations than any other company, for private clients and government agencies in the UK and around the world

JFlow outputs are used by government, industry and the public to make planning decisions, to support the investment case for flood defences and to help ensure sustainable development. Maps produced using JFlow were described as revolutionary by leading insurer Aviva.

Thanks to the flood map, the insurers were able to qualify more than 600,000 properties in flood risk areas for insurance. The success of JFlow has supported the creation of a new company, JBA Risk Management, employing 28 people. The JFlow approach also has the potential to model flood risk in developing countries where the costs of flood mapping would traditionally be uneconomic.