The Explore Manufacturing plant at Steetley in Nottinghamshire

Laing O’Rourke’s Explore Manufacturing precast concrete facility near Worksop could change the way that buildings are constructed in Europe. Explore’s approaches to manufacturing and preassembly have already won it prestige contracts in the UK, and there are signs that its Design for Manufacture and Assembly strategy will be followed further afield. It is the brainchild of Ray O’Rourke who spoke to Ingenia to explain the principles behind Explore.

The future of construction will be engineering-led and the secret of what it will look like may be found in a former quarry on the Nottinghamshire-Derbyshire borders. So believes Ray O’Rourke, the chairman and chief executive of Britain’s largest private contractor, Laing O’Rourke.

The company has so far invested £100 million creating the state-of-the-art Explore Industrial Park in Steetley near Worksop, with a factory mass-producing concrete components using processes modelled on the automobile and aerospace industries. Indeed, the process bears closer resemblance to a car production line than a traditional precast yard, with the machinery controlled directly by the 3D software on which the intended buildings or civil engineering works are designed.

The vision is for a factory-based construction industry where as much of the work as possible is done in efficient, controlled conditions, leaving just the site preparation and assembly to be done in situ. The company’s initial target is 70% of construction in offsite fabrication, 60% reduction of labour onsite, and 30% reduction in programme time. On the high-profile 122Leadenhall Street building in the City of London (see Thinking differently), it is now expected that 85% offsite fabrication will be achieved. 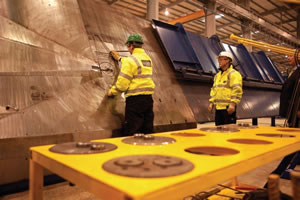 A simple statistic illustrates the problem with traditional construction methods and signposts where to look for something better. According to the campaigning organisation, Buildoffsite, in the pre-recession decade from 1997 to 2006 when inflation totalled 25%, the price of a small car increased by just 1.5% while the cost of construction went up by 89%. Could the lessons from one industry be applied to improve another?

It is not just a matter of reducing costs. Ray O’Rourke is targeting benefits in four other areas as well: higher quality, faster completion, improved safety and a more sustainable construction process. He also feels that if the construction workforce were highly rewarded, worked fewer than 40 hours a week, were highly trained (and multi-skilled) and if most worked in a factory rather than a cold and wet construction site, perhaps another perennial difficulty for the industry might be overcome – attracting able people to work in it, at all levels.

Other industries have shown how it could be done. In aerospace, a plane is designed and ‘built’ as a 3D computer model, then evaluated and redesigned many times before anything is manufactured or assembled. This results in levels of precision, efficiency, reduced waste and, ultimately, savings in time and cost which the construction industry can only dream of.

A subsidiary, Crown House, which currently produces services in similar factory conditions near Wolverhampton, will relocate to Steetley, and the site will eventually house all the company’s offsite fabrication for the UK.

The £60 million, 25,000 m² Explore factory is arranged in three lines. On one side, standard items such as floor or wall panels are produced; on the other, bespoke items. Down the middle, the rebar is cut, bent and assembled. A monorail delivers precise amounts of concrete from the central batching plant.

But the first stage in the process happens in the design office, establishing a detailed 3D software model of the whole structure. Working from architects’ and engineers’ designs, the team builds up a model on its Nemetschek software system, which is able to break down the structure into individual, compatible elements for manufacture.

The data for each element is then passed electronically to the production team’s Unitechnik software system. This software extracts all the data for controlling the shuttering robots and the reinforcement assembly. It also optimises which items are to be manufactured when, both to maximise the efficient use of the factory plant and to ensure that the eventual output matches delivery schedules.

Standard items such as floor slabs are cast on a production line of large 14 m by 4 m pallets. The production line consists of a series of these large, flat steel plates – or pallets – which move by stages through the production line. Robots guided by the software then select from a stockpile of different lengths of 95 mm-deep steel sidewalls for the shuttering, and place the walls precisely in position on the pallet where they are held in place with magnets. The same robots also contain inkjet plotters which mark on the pallets the precise positions of any fixtures and fittings – such as electrical boxes, cut-outs or handrail brackets.

The pallet then moves along to the ‘first human intervention station’ where these fixtures and fittings are added, again held down with magnets. Meanwhile, on a parallel production line, a reinforcing mesh machine guided by the same software is drawing from coils of different diameter steel bar, cutting and joining the bar to form the mesh to the right shape and spacing. When the shape is complete, an automated crane lifts and places the completed mesh into the exact position in the mould via a buffer stock.

Another robot then adds a reinforced lattice girder to give additional strength before the ‘second human intervention station’ when the lattice girder is tied in, the whole assembly is checked visually against the 3D model and any additional items in the top of the element, such as cable conduits and fittings are added by hand.

The pallet then moves to the casting station where an operator transfers data on the volume of concrete required and the parameters of the mix from the Unitechnik system to the control system for the Skako batching plant and distribution system. This measures and weighs the ingredients and transfers them straight to the mixer. Three minutes later the mix is dropped into a hopper on a monorail, which goes to a mould and deposits the concrete. The whole pallet is then vibrated by a gyro shaker to compact the concrete.

Finally, the pallet moves to the curing chamber where, eight hours later, the elements are ready for de-moulding, and the pallet can be cleaned and returned to the start of the line.

More complex items on the ‘bespoke’ production line require more human intervention, but, even then, all the cutting and bending and much of the fixing of the reinforcing bar is done automatically.

Explore is currently running with a single 8-hour shift, with a second 8-hour shift in some sections for some of the time. However, the team believes that production processes have been refined, productivity improved and potential bottlenecks identified so that they could move up several gears to full 24/7 operation as demand increases. 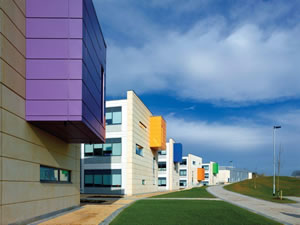 The targeted benefits of factory production are not straightforward to measure. The savings in cost are potentially substantial as a result of the huge efficiency gains of mass production.

Increase in quality comes with the improved finishes and tighter tolerances which can be obtained in factory conditions, combined with the ‘perfect fit’ achievable with integrated 3D design. In addition, the time savings can be substantial. On a recent school-building programme, the delivery time for a school was reduced from the ‘standard’ 80 weeks to 60 weeks, and then to 44 weeks, so that a new school could be delivered within a single academic year.

Safety is bound to improve, perhaps by a factor of four, with a switch of activity from site to factory. Last year there were 50 fatal accidents on UK construction sites, compared with 27 in manufacturing – despite the fact that twice as many people work in manufacturing.

Sustainability benefits come in a number of ways. The concrete mixes in the factory use a minimum of 25% cement replacement using ground granulated blast furnace slag which reduces embodied carbon without affecting structural strength and curing times. The plant also has a recycling plant to reprocess and reuse any waste wet concrete. One truck may deliver components to site which, for onsite construction, might usually require five or six visits. Waste is greatly reduced on site, and can be reduced to virtually zero in the factory. But one of the greatest benefits may be that buildings completed with integrated 3D design and tight tolerances are showing a tenfold improvement in air-tightness, with resulting reductions in wasted energy.

The change from site to factory production requires a change in mindset from everyone involved in the design and construction process. Designers and managers have to embrace the concept of 3D modelling, not just for design but for planning, managing and monitoring the whole construction process. Site teams are smaller, need to be multi-skilled and have to be disciplined in operating to a pre-set time plan, and wearing white gloves to handle materials on site is a major cultural change. The gloves are both to protect the items and a reminder that the materials are high-quality finished items.

The really big change is the need to think through the whole design and construction process before anything is done onsite, or a single component ordered. Every last bolt-hole, services riser and cable duct needs to be pre-planned so that the right sized voids can be cast into the floor slabs and the correct details included on each item. Only with this extraordinarily high level of pre-planning – a novelty for much of the construction industry – can the process lead to ‘right first time’ and zero intervention onsite, and hence the promised time, cost and quality improvements.

The response from designers, both architects and engineers, has been overwhelmingly positive, the company says. They are excited at the opportunity to design in 3D, with such close links to the construction process.

So why has it taken construction so long to start to embrace techniques which have been embedded in manufacturing for decades?

The conventional answer is that it is the legacy of mistakes in the past with housing, and the bad name that was given to prefabrication. The technique was used extensively to meet the huge UK post-war housing needs, leading to a wave of high-rise tower blocks. The partial collapse in 1968 of Ronan Point, a 22-storey block in East London built with a ‘large panel system’, led to a retreat from prefabrication. Later, in 1983, a World in Action television programme severely criticised the construction of a small group of houses in the west of England for allowing water to penetrate, and caused a collapse of the prefabricated timber-frame building market.

Richard Ogden of campaigning organisation Buildoffsite gives a different reason, that of a deeply conservative industry unwilling or unable to embrace new ideas. He feels that it continually harks back to isolated failures in prefabricated housing while ignoring the numerous failings of conventional construction. And, of course, in those days the industry had none of the benefits of 3D design software.

Ogden believes that Laing O’Rourke is now way ahead of the rest of the industry, and that Explore really is the vision of the future which others, sooner or later, will have to follow. He also believes that, if there were an international league table of 21st century offsite construction created, the UK would probably be leading it.