The 6,000 seat Velodrome is the most energy-efficient of the permanent Olympic venues and, for many, the most beautiful building in the Olympic Park. It has already won the Supreme Award of the Institution of Structural Engineers, and was the runaway winner of the ‘people’s poll’ for the RIBA Stirling Prize. Ingenia reports on the engineering behind the design and construction of the Velodrome.

The starting point for the competition-winning design of the Olympic Velodrome was, appropriately enough, Victoria Pendleton’s carbon fibre racing bike. Built for speed, it has everything trimmed down to the minimum. The bicycle inspired the team tasked with designing and building the stadium and provided them with their guiding mantra: to ‘Do more with less’.

The build-team responsible for the Velodrome at the Olympic Park in Stratford were: Hopkins Architects; structural engineers, Expedition; the contractors ISG and environmental services engineers BDSP. The resulting building, with its distinctive double-curvature ‘Pringle’-shaped roof, has received plaudits for creating a structure that has economised on the use of materials, allowed minimal interior volume for heating, created a shape that is suited for natural ventilation and that was quick, economical and safe to build. 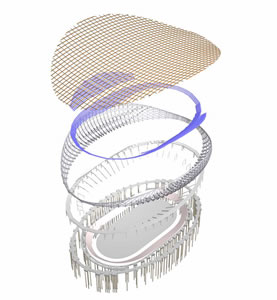 An exploded view of the Velodrome showing key elements. From top: the cable roof, the upper seating, the upper bowl, the lower bowl and the foundations © Expedition

The centrepiece is the oval timber track (see The Cycle Track), and the design team’s task was to wrap a building around it. As with all velodromes, the seats are located predominantly along the straight sides of the track where sight-lines are best, and are stacked highest at the centre of the straights. If a roof is then ‘shrink wrapped’ over the combined shape of track and seating, the result is a double-curvature shape, highest over the top seating and lowest over the apex of the bends.

Expedition recognised immediately that this shape lent itself to a cable net design, with the rising and falling cables acting against one another to give a roof structure which remained stable and in tension
in all loading conditions.

Despite uncertainties about the cost and risks of trying out a technique that, though widely used internationally, had rarely before been used successfully in the UK on such a high-profile site, they were supported by the winning contractor who believed that the net would be cheaper than a conventional steel arch roof. This was partly thanks to the amount of material saved by using a cable-supported structure. Despite a much longer lead-in time for ordering the cables, it would save time; and because the roof would be assembled on the ground before tensioning, it would be safer to build.

The design presented Expedition with two enormous challenges. The first was how to contain the tension in the cables. The roof is a little like a giant warped tennis racket, and just as a tennis racket needs a stiff frame to hold the strings, so a traditional cable net roof requires a massive ring beam. But this beam would have been extremely heavy, and would spoil the elegant lines of the top edge of the structure.

However, if the frame of the tennis racket could be fixed to the rim of a rigid bowl, then the bowl could help resist much of the tension, and the frame could be made much smaller.

This was the option chosen. The 48 steel rib trusses of various lengths on which the roof sits, and their associated cross bracing, may appear to be doing little more than supporting the roof and the tiers of seating, but structurally they are working exceptionally hard in transferring as much as 75% of the load that would otherwise be carried by the ring beam down through the concrete substructure into the foundations beneath. This has saved a massive 2,000 tonnes of steel from the structure and means that the ring beam is all but invisible at the high points.

The second big challenge was movement of the roof. Cable nets need to move with changing loading conditions, and this is relatively straightforward if the roof surface is a simple flexible membrane. However, the Velodrome needed high levels of insulation of the roof. Added to that, the ODA planners wanted an aluminium standing-seam roof surface, which is attractive and long-lasting but rigid with large thermal movements. This required some very careful thought about the detailing.

The net itself is made up of pairs of 36 mm diameter spiral strand cables on a 3.6 m grid, locked together with forged steel nodes at each cable intersection. The roof is built up from more than 1,000 plywood-faced panels matching the size of the 3.6 m grid. But how could each of these rigid panels be allowed to move independently of its neighbour as the roof flexed? Allowing also for tolerances and the vagaries of the roof’s geometry, differential movements of up to 30 mm in any direction had to be accommodated (the roof can move/deflect by +/- 500 mm vertically, under wind and snow).

The solution was an ingenious detail at every point where the cables cross: a bracket, which sits on each of the forged steel nodes and supports a corner of each of four panels independently. For each panel, one corner is fixed at the node, an adjacent corner has a slotted connection, and the other two corners have oversized holes, thus holding each panel in place but allowing sufficient movement in any direction.

With the panels in place, 300 mm of insulation was added. Then the ‘Kalzip’ aluminium roof was laid in strips up to 130 m long: it is free to expand and contract along the length of the standing seam, with movement joints in the transverse direction.

A further challenge for Expedition was the sheer scale of the structural analysis required. There was a large combination of different loading conditions, for example for wind or snow, or for the various stages of the erection procedure. Also the roof, the steel structure and the concrete substructure could not be analysed separately as they all formed part of the same, connected structure, and a change of loading on the roof would affect everything else.

The design team was determined to keep materials to a minimum, so each element of steel or concrete was made to work extraordinarily hard. Furthermore, they could not be sure whether the Velodrome would behave as a ‘stiff’ or a ‘soft’ structure, so they modelled and analysed both alternatives with many sensitivity tests.

The primary tool was Oasys GSA finite element analysis software, backed up by a series of non-linear analyses and much post-processing of data to check, for example, the effect of movement on each and every component. It is doubtful if any roof in history has been so thoroughly analysed. The result is a structure as light as the design team dare go.

As the structure began to take shape, the cables were being manufactured in Germany. Each cable was cut to the correct length and prestressed to its design loading in the factory, and the exact position of each node clamp marked (within 2 mm), before the load was released and the cable coiled and packed for shipping.

At Stratford, tower cranes were used to drape each cable roughly into position on the ground, over the part-completed structure. The node clamps were fixed, creating the finished grid. With a safety net fitted beneath, the cables were tensioned from the ends with electric winches and pulleys, gradually lifting the cable net into place. The whole process took just eight weeks. The cables were tensioned and then the panels could be fitted one by one, working inwards from the edges. The final roof weight including cables, the slimline ring beam, timber cassettes, insulation and finishes averages out at just 68 kg/m2.

At one stage, the design team was under pressure to improve the structure’s outwardly visible environmental credentials by adding a large array of photovoltaic cells on the roof. That would have added around 60 t to the roof load. Better, they reasoned, to save electricity by incorporating strips of rooflights into the roof, with diffusing glass to avoid glare on the track (see Sustainability). For the Olympics (and a few other major events each year) high-intensity lighting is provided, but for training and minor events this natural lighting will suffice. 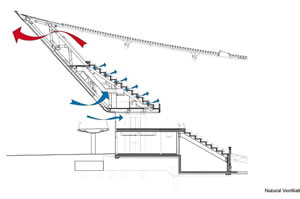 Cross section at the highest point of the roof, showing how the chimney effect promotes natural ventilation. Cool air is pulled through low level louvres and exits at high level. These louvres form the distinctive pattern in the outer cladding © BDSP

The full 6,000 seating capacity is only likely to be needed for these occasional major events. Hence the main banks of seating are separated into two tiers, with just the lower tiers used for more regular, minor events.

Heating and cooling were given careful treatment, partly to cope with the unusual requirements of the venue and partly to avoid waste. Cyclists require high temperatures – 26°C or more – to reduce air resistance so that they can achieve record-breaking times. But they also hate drafts; the cyclists need warm, still air without distractions if they are to achieve record speeds. The solution was to engineer three types of heating: underfloor heating in the infield, providing background heating; underseat heated air supply providing extra heating and fresh air; and jetted heated air supply for quick conditioning of the arena.

In the summer and mid-season, the shape of the roof comes into its own, allowing the main arena to be fully naturally ventilated (there is no mechanical cooling in the main arena). The high-points of the roof are over the main seating areas, where the heat gain is greatest, so a chimney effect has been created by integrating outlet vents into the high points of the building façade, with inlet vents lower down. Leaving some of the concrete substructure exposed in critical places creates a thermal mass which helps to reduce heat build-up.

The Velodrome is the centrepiece of a landscaped VeloPark which also includes the BMX track, and will later be joined by a one-mile road cycle circuit and mountain bike trails to create a cycling legacy which will last for generations to come – however well the British cycling team performs in the Olympics.

See more articles on the Velodrome at http://tinyurl.com/cofbu73