Monodraught, a UK-based company, is leading the way in using natural energy sources such as wind and sunlight to create systems that ventilate and illuminate buildings. Dozens of warehouses and schools as well as big commercial developments including the Blackfriars Bridge upgrade have installed the company’s light tubes to capture outdoor light and channel it indoors. 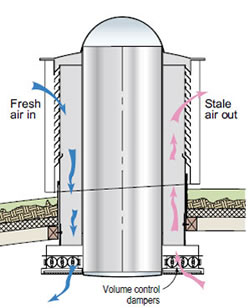 Using non-artificial light to illuminate rooms is not new: the ancient Egyptians used a variant of light pipes. But it was not until a UK inventor, Stephen Sutton, patented his system in Australia that it became commercialised and widespread. After initial success in Australia and North America, other countries adopted the system and Monodraught Ltd, based in High Wycombe, introduced the Sunpipe® to the UK in 1996.

Sunpipes are silverised mirror-finished aluminium tubes that carry daylight down from a roof-mounted dome into rooms below where a ceiling diffuser distributes the light. The roof dome is diamond-shaped, maximising the penetration of sunlight through its flat prism. The recycled aluminium tubes have a silver coating with a further UV inhibitor-coating to reduce the damaging effects of the sun’s rays. During daylight hours, they provide light comparable to 100 W in rainy weather, or 450 W in full midday sun. While single-storey buildings derive the full benefit, it also works for multi-floor applications, though there are some transmission losses as the light source has to travel longer distances.

With proposals for all new commercial developments to be zero-carbon by 2019 in the UK, companies have to get used to ensuring that buildings are energy efficient. Sainsbury’s has installed several hundred Sunpipes in its outlets and warehouses and has gained energy efficiencies in ‘operational carbon’ by reducing CO2emissions from electricity normally used for lighting.

Monodraught also produce a combined Sunpipe and ventilation system, which incorporates a set of vents below the PVC dome at the top of the pipe. Wind comes through through rooftop louvres which are then turned 90° forcing the air down through internal ducts into the room below. Warm, stale air is expelled from the room by the passive stack ventilation (PSV) principle whereby the buoyancy of warm air means that it is displaced by the heavier incoming colder air. 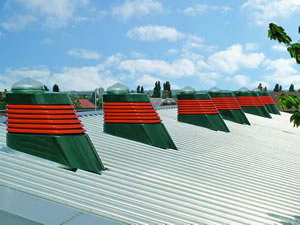 The Suncatcher® is a combined daylight and ventilation system installed in many warehouses, hospitals and schools including this one at Audley Junior School

Monodraught has an in-house R&D department which is now working with a group of UK universities developing more ways of harnessing renewable energy.

The winner of the 2012 MacRobert Award, the Range Rover Evoque, combines off-road capabilities with a more energy-efficient engine and a lighter body

The search for fusion energy has led to advances in remote handling, materials science, and plasma isolation chambers

<i>Ingenia</i> traces the historical and technical background to shale gas, and the issues related to its extraction

With London’s newest landmark, engineers needed to resolve challenges including building around unmovable cores, extreme craning and controlling the sway of the spire