Inside the rain room - No umbrella required 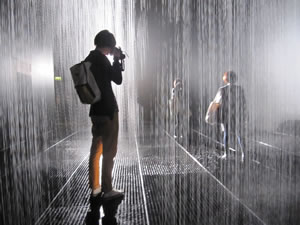 In 2012, the longest queues for an artwork in London must surely be for the Rain Room installation at the Barbican. For the first month of its opening at the Curve Gallery, people waited up to three hours to walk through pouring rain without getting wet. Ingenia asked Florian Ortkrass, a co-founder of the rAndom International studio, about the popular interactive artwork.

With artists pushing the boundaries of their work and challenging how the public views or interacts with a piece, the art world is increasingly turning to engineering and technical solutions to realise ideas. Until March 2013, the Barbican Centre’s Curve Gallery is home to an installation called Rain Room. The art studio, rAndom International, has created and installed a 100 m2field of rain through which the visitor can walk without getting wet.

The Rain Room installation includes injection moulded tiles, solenoid valves, pressure regulators, custom software, 3D tracking cameras, steel beams and 2,500 litres of water creating a downpour of a thousand litres of rain each minute. All of these elements come together so that visitors are able to experience being cocooned within their own microclimate. A dry zone is created around each person, acting like an invisible umbrella that protects both individuals and groups. Visitors enjoy the unusual sensation of having the waters part in front of them. For the artists who created the experience, the different reactions that people have to their installation bring the piece to life

Art studio rAndom International was founded in 2005 when Florian Ortkrass joined forces with fellow Royal College of Art students Stuart Wood and Hannes Koch. Koch and Ortkrass were studying Design Products and Wood was studying Interaction Design. While their backgrounds bring technical knowledge into the studio, the starting point for any work is always a blank sheet of paper. How the public interacts with their work is crucial to the team.

When the idea for Rain Room came up three years ago, the team needed to prove to themselves that it was possible to construct before they approached potential exhibitors. Experience gained from the production of previous works meant that they knew they could track people’s movements with 3D cameras, but could they make it rain? The studio started very small, by trying to make one drop. They soon realised that making rain look like rain and not like a dripping tap was itself a challenge – see Looks like a rain drop.

When rain falls it forms into drops of 1-5 mm in diameter: above 5 mm, they become unstable, breaking up as they move through the air. The drops themselves fall at a natural terminal velocity of 10-12 m/s.

After days of calculations involving fluid dynamics, as well as exploring what people perceive as rain, the team generated between 10 and 20 prototypes. The ceiling in Rain Room is 4.5 m high, which means that the drops reach around 50-60% of terminal velocity. Each drop is between three and five  millimetres wide, and is formed by the designed profile of the ceiling tiles.

Next, the team had to work out how geometric the fall of drops could be. In using a repetitive pattern, the team had to tackle the possible appearance of lines, and drops falling like a curtain. They discovered that, although each tile contains 16 uniformly spaced holes, the drops themselves create enough randomness when they fall.

There are so many uncontrollable factors that influence the drops forming – subtle variations in pressure and capillary action – that they were able to use the imperfections in their favour. The team found that the shape of water droplets is easily influenced by outside factors, preventing any absolute precision that would look unnatural. So one drop became an entire rain shower, delivered at a rate of 1,000 litres every minute. This ability to create randomness in the water pattern from a standardised tile saved costs and precious assembly time. 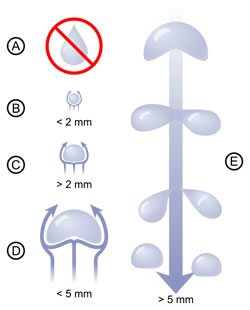 The next challenge was to stop the rain instantly. By experimenting with different shapes of tile for the ceiling, they worked out how they could use capillary forces to retain the water in the tiles. A solenoid shutting off the water supply stopped the rain, and by using very narrow tubes they could use the pressure difference and capillary action to stop the water immediately. Also integral to the design is a system for cleaning and treating the water as it is recycled to provide a continuous downpour. In Rain Room the individual components are custom creations, sometimes involving high-end industrial equipment.

3D cameras track the size and shape of any object entering the field and use this information to control the water valves. This means that when someone walks into the rain, the flow immediately above them stops almost instantly.

Having produced rain and worked out how to to create a ‘void’ around the participant, the team turned its attention to lighting and how to make the rain as visible as possible. During testing it became apparent that the rain is hardly visible against a white backdrop because the light focused by the drops is no different from the light surrounding them. Ortkrass observed that rain is less visible against bright clouds than against darker skies. By using a black backdrop and experimenting with the angle of the light, they could create a high contrast between the two, which visually draws the best out of every drop. To achieve this in situ, the entire Curve Gallery had to be painted black. A strategically placed large high-definition multimedia interface light also allows for the rain to be easily photographed.

When the prototype of Rain Room was ready for testing, the rAndom International team had to dare each other to step into the downpour. When speculating about the response it would receive from the public, they made an assumption that people have a learned urge to run to escape ‘usual’ rain.

In practice, visitors seem to understand at once how the installation works. They would realise that they were going too quickly and stop. On the first day of operation of Rain Room, a camera crew walked straight into the rain, complete with all its equipment. The trust implied by this behaviour surprised the makers, but this kind of unexpected reaction has become their main interest.

For rAndom International, their work is not about the artists, or about the piece, but about the people who interact with it; what people do is what fascinates the makers. In this regard, the choice of venue is also important, as Florian Ortkrass explains. “It was very important to us that the piece is public and that it’s free. You get everyone, not just people who are happy to pay or people who are there for professional reasons. We would not have so many kids in there, either, if there had been an entry fee.”

Following the critical and popular success of Rain Room, the work of rAndom International is in demand. A retrospective in Paris staged at the same time as the Barbican show has been heaped with praise. Bringing together a unique mix of technological expertise with striking interactive concepts has ensured that the queue at the Barbican is unlikely to get any smaller before the installation closes in March 2013.

For 21 years, the charity Motivation has designed and supplied tens of thousands of wheelchairs for use in developing countries