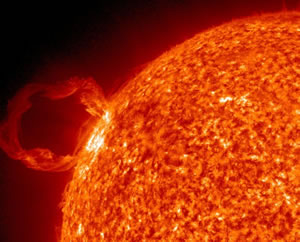 The Royal Academy of Engineering published the report Extreme space weather: impacts on engineered systems, infrastructure, and society in February 2013. The report was the UK’s first in-depth study of the impacts of space weather and outlined many of the challenges a solar superstorm would pose.

Explosive eruptions of energy from the Sun that cause minor impacts on Earth are relatively common, but ‘superstorms’, which occur approximately once every two centuries, have the potential to disrupt the electricity grid, satellites, GPS systems, aviation and mobile communications. Although the UK is better prepared than most countries, there are areas where it needs to improve resilience and create preparation strategies.

The National Grid has already taken measures to harden the electricity grid against disruption. In the worst case scenario power can be rerouted so that only one or two regions need experience disconnection from the grid for any length of time.

The satellite fleet is not so well protected, and up to 10% of satellites would be expected to suffer outages for up to three days. Global Navigation Satellite Systems (GNSS) including GPS and Galileo could also lose function for up to three days due to disruption of the radio transmission paths between the satellites and the ground. This could affect communications systems that depend on GNSS for timing, such as banking transactions. The UK’s cellular networks do not depend on GPS timing, so mobile phone users will not be directly affected, but may suffer some performance degradation.

Aviation is also largely independent of GNSS, and designed to resist most of the effects of a solar superstorm. However, airborne crew and passengers at the time of an event would be exposed to radiation equal to three chest X–rays: an unusual dose, but not a significant one.

The chair of the Academy’s working group, Professor Paul Cannon FREng, was interviewed extensively across TV, radio, and print and online media. He emphasised the report’s recommendations that the government set up a UK space weather board to coordinate a national strategy to minimise the effects of a superstorm and that more research is needed into the full effects of superstorms.

Read the full report at www.raeng.org.uk/spaceweather 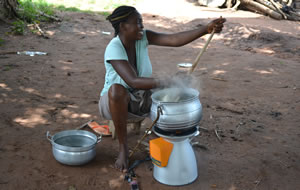 The new BioLite HomeStove™ is being pilot tested at the moment. This biomass stove converts waste heat into electricity, reduces smoke emissions by up to 95% and could potentially reduce the 4 million annual deaths related to indoor air pollution

The St Andrews Prize, which recognises significant contributions to environmental conservation, awarded its 2012 prize to an African project, the Lion Guardians. This scheme employs 32 Maasai in Kenya as community conservationists and field biologists. The programme aims to conserve lions by mitigating conflicts between lions and livestock, monitoring populations and working with local communities to prevent the killing of the endangered species.

The annual St Andrews Prize was established in 1998 by St Andrews University and independent exploration and production company ConocoPhillips to strike a balance between the science, financial resources and political will needed to create practical environmental projects. The winner is given $100,000 to develop their project while two runners-up are given $25,000 each. Every year, the international award attracts submissions from over 50 countries with finalists and previous winners often including engineering initiatives.

One of the runners-up for the 2012 prize was Aqua 21, which has developed an ozone-based disinfection technology that is non-chemical, low-carbon and reliable. It is also flexible as it can be scaled from industrial-sized applications to the village pump where it can be run on renewable energy.

The two previous winners of the St Andrews Prize also drew on engineering ingenuity to execute environmentally beneficial ideas. In 2011, clean energy company BioLite developed a camping cookstove that burns biomass (such as wood) rather than nonrenewable fossil fuels to cook food. The stove converts heat to electricity via a thermoelectric generator which powers a small internal fan that improves combustion, reducing harmful emissions. Surplus electricity is sent to a USB port to charge essential small electronic devices, such as mobile phones.

A year earlier, water was again the focus of the winning team from Queen’s University, Belfast, which devised a method of removing arsenic from groundwater without using chemicals. Arsenic poisoning by drinking water or eating contaminated rice is a major problem in some areas, notably the Indian sub-continent, where deep wells encounter arsenic that can exist naturally in the water table. The team tested their solution in a trial plant in West Bengal, and several plants are now supplying lifesaving clean water to locals in this remote region.

For more information about the prize visit www.thestandrewsprize.com

ConocoPhillips is also lending its support to a new Africa Prize for engineering innovation being launched by the Royal Academy of Engineering. The prize aims to motivate and support engineers in Sub Saharan Africa whose ideas will benefit the region. 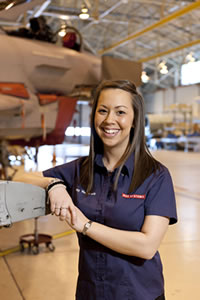 Jenny Westworth, a former apprentice at BAE Systems, has been named the first ever City & Guilds Apprenticeship Champion of the year. The new award highlights the contribution that apprentices make to their employer’s business development, and Jenny won for her role in championing apprenticeships to schools, young people, and the public. There were 12 shortlisted finalists for the award, with the winner selected by public vote.

Jenny Westworth, now a manufacturing engineer at BAE Systems, completed her advanced apprenticeship in aerospace engineering at Warton Aerodrome, Preston. While she originally applied to university, having done well at GCSE and A-level, the nearest university with a course she was interested in was three hours from her home in Morecambe. She decided instead that the BAE apprencticeship offered a more immediate opportunity to become involved with aeronautical engineering and manufacture. The skills she learned as an apprentice led to her current role on the final assembly line for the Typhoon aircraft.

Through her apprenticeship, Jenny Westworth has become an education ambassador for BAE Systems and a STEM ambassador for her region. She promotes apprenticeships to inspire other young people and demonstrates the variety of careers that STEM subjects can lead to. Jenny is especially keen to promote engineering, and for young women to consider aeronautical engineering for its wide range of work and career prospects.

To view the full list of award winners and finalists, or for more information about apprenticeships, visit www.apprenticeships.org.uk 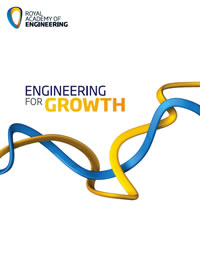 The Royal Academy of Engineering launched its Engineering for Growth campaign in February 2013 with a number of activities that aim to stimulate entrepreneurship. It also published a brochure highlighting the £481 billion contribution that engineering makes to the UK economy. The Engineering for Growth brochure identifies 10 dimensions of growth underpinned by engineering, including economic growth, the knowledge base, skills, health and wellbeing.

Speaking as part of the launch of the campaign, the Rt Hon Vince Cable MP, Secretary of State for Business and Skills said: “We strongly support the Royal Academy of Engineering’s work to help young, highly-skilled engineers to develop entrepreneurial skills to take technologies to market. Small businesses are an important part of an agile economy, and having entrepreneurism as well as technical knowledge of the sector is essential to ensure success.”

As a key plank of this campaign, the Academy is launching a new business resource later this spring. The Enterprise Hub will focus on specific activities designed to support engineering innovation and business. It will match new engineering and technology start-up companies with Academy Fellows who will offer mentorship and expertise. The Academy also aims to develop a new programme that will take ‘the best of the best’ early stage companies and provide them with a long-term package of mentoring, training and tailored support.

The Enterprise Hub will bridge the gaps between the Academy and the marketplace. This will involve helping researchers to further develop and commercialise their ideas. As part of the Hub’s activities, the Academy will build on its BIS-funded Engineering Enterprise Fellowships programme, which enables entrepreneurial academics to spend a year starting a business. The Academy will continue to fund over 130 specialist researchers and maintain its important links between industry and academia that support innovations that are driving economic growth.

The Engineering for Growth brochure can be viewed online at www.engineeringforgrowth.org.uk 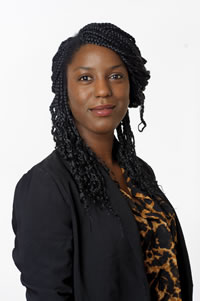 Yewande Akinola, an environmental engineer with Arup, has been named the Institute of Engineering Technology’s Young Woman Engineer of the year. The award recognises high-achieving women engineers under 30 who also serve as inspirational role models for the profession.

Yewande Akinola works in the Building Design Group at Arup designing sustainable water supply systems for schools, homes, and offices. One of her early projects involved working on a large brownfield redevelopment and sustainable regeneration of Central Saint Giles in London. It became one of the first city centre projects to use a site-wide biomass heating system, extensive green roofs, and recycling of rainwater and grey water.

She has also been involved with international development projects, including working with the charity WaterAid to develop sewerage and clean water supplies in Maputo, Mozambique. In 2009, Yewande and two other engineers on her team were awarded the Society of Public Health Engineers’ Young Engineers of the Year Award for their work in the area, designing an innovative rainwater harvesting system for flushing toilets and urinals.

Yewande Akinola also campaigns to promote public engagement with engineering, through her speaking and media work. In the past year, she has appeared as an expert on radio and television programmes, including a recent Channel 4 and National Geographic series on the construction of the Titanic. She also gives talks to schoolchildren about careers in engineering, has led events at the Royal Academy of Engineering’s stand at the 2012 Big Bang Fair, and maintains a blog about her life as an engineer at
www.yewandeakinola.com