Response to: Balancing the Energy Network

Phil Lawton sets out a compelling case for how National Grid is addressing the UK’s power and gas network challenges to 2020. Given the 20- to 50-year asset lives associated with these investments, it is important to ensure the longer-term energy needs of the UK are also addressed and that we retain the ability to adapt our energy system to continue to deliver affordable, secure, and sustainable energy to consumers, while also delivering near-term benefit and economic growth.

At the Energy Technologies Institute (ETI), we look at the full breadth of future energy use in the UK, adding the dimension of transport to power and heat. Working with major utilities and groups such as National Grid, we carry out strategic assessment and design of potential, cost-optimised, UK energy systems out to 2050, recognising that the initial stages of any pathway to 2050 are essentially already set in the development of infrastructure for 2020. In progressing beyond 2020, our analysis consistently highlights six ‘UK national priorities’: improving energy efficiency (in buildings and transport); progressing new-build nuclear; sustaining gas as a fuel (for power, heat and potentially in fuelling transport); establishing UK-grown bioenergy crops; reducing the cost of offshore renewables and de-risking carbon capture and storage (CCS) for investors.

De-risking CCS is particularly important in enabling the UK to sustain long-term use of fossil fuels, improving energy security and affordability whilst maintaining the ability for the UK to still meet its 2050 CO2reduction targets. A recent ETI study with the Ecofin Research Foundation has highlighted that effective implementation of CCS in the UK could reduce the annual cost of meeting our national carbon targets by up to 1% of GDP in 2050 – or more than 10% of the overall national energy system cost across power, heat, transport and infrastructure for all consumers.

Implementing CCS is an important, long-term opportunity for the UK, but we also need to address smaller-scale, near-term developments that ensure we retain flexibility in the overall system and address the increasing levels of intermittent generation from solar and wind. At ETI we are investing over £20 million in innovative projects developing new electricity storage as well as network control and management technologies which can be installed at major substations – reducing the need for costly local network upgrades and reducing the demand variability on centralised generators.

The innovation and engineering of these new products is challenging and costly, but the potential national cost benefits of implementing each technology development across the future UK energy system consistently run into tens and hundreds of million pounds per year. These are long-term benefits; in the near-term we also need to make sure we capture the value of the skills, capability development and economic growth that go with investment in innovation. 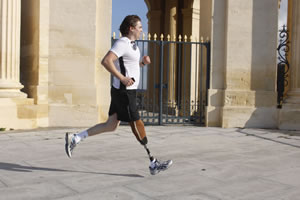 The evolution of applied technology in prostheses for amputees has recently seen rapid developments. Undeniably, this is partly driven by recent conflicts in war-torn areas, but there can be little doubt that one of the biggest catalysts has been the London 2012 Paralympic Games (see Ingenia 53’s Opinion piece Engineering’s Olympic Legacy).

The Paralympics showed that disabled people could achieve much more than the general population had previously thought. We, in the prosthetics industry, weren’t surprised by what was achieved. I remember going to the Barcelona Olympics and watching one of our amputee clients run the 100 metres in 11.2 seconds – at the time Linford Christie was running 9.58 seconds.

The London Paralympics helped a lot of people understand that the loss of a limb, or being unable to use part of the body, was not the limitation; such limitations can be transcended. Many people saw Paralympic athletes achieving things that many able-bodied people can’t do, such as double amputee Markus Rehm jumping 7.35m to win gold in the long jump. The notion that someone without a leg is unable to do many things is no longer valid. Expectations have changed and there have been social, philosophical, technological and economic impacts.

In lower limb prosthetics the Paralympics have motivated us, not only to design products to rehabilitate people but to develop equipment that stretches the user up to the edge of their abilities.

That step change in the idea of a user’s needs and what they could achieve has come through a combination of applied technology and the wider social awareness triggered by the Games. Just as someone turning 75 no longer expects to be restricted to minimal activities but wants to cycle or participate in hill walking, so the requirements of amputees have changed.

Back in the 1990s I used to visit schools across the country with two Paralympians. We would talk to children with prostheses, and a typical question from a 14-year old would be, “Can I ever drive?” We would say, “Sure, no problem, but why aren’t you playing football?” A lack of knowledge meant that PE teachers had been telling these children to sit out their sports sessions in the gym. The challenge we had wasn’t only educating the children, it was educating the teachers. We would say, “Look, these youngsters can do a lot more than you think they can do. Don’t limit them.” If I were to go around to schools now, the question would be, “Can I run 100 meters in 10 seconds?”

The Paralympics has caused a change in social consciousness. People now have a different concept of disability. The perception of the body has changed, to seeing the body itself as a device, and understanding that disability need not be limiting. A minority group that perhaps before thought that they couldn’t do things is now a minority group that expects to be able to do more!