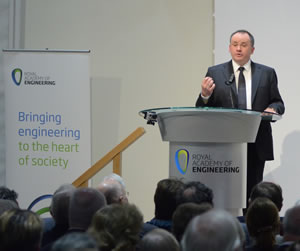 John Linwood, Chief Technology Officer for the BBC, is responsible for the broadcast and enterprise technology infrastructure behind all BBC output. For the Royal Academy of Engineering’s New Year Lecture in January 2013, he took his audience behind the scenes at the BBC and spoke of the corporation’s technological challenges and advances.

John Linwood joined the BBC from Yahoo!, where he was Senior Vice President of International Engineering, overseeing a staff of 1,600 located across 22 countries. He had responsibility for the development, deployment, and delivery of all the company’s services outside the US. Before that, he spent 11 years at Microsoft, beginning as an Architectural Consultant in 1993, then rising through senior positions in the company’s MSN business, until he managed all of MSN’s international engineering. In his final post at Microsoft, John Linwood was driving the company’s global service quality, formulating its international hosting strategy as well as international product development.

In 2009, Linwood was headhunted by the BBC to engineer the corporation’s use of new technology and to manage the BBC’s extensive archives, collected since the organisation’s formation in 1922. In his lecture, he explained how the BBC has always led the way on technological innovation. In fact, from the moment of its inception, the broadcaster’s Chief Engineer (the former name for Linwood’s role) was second only to the Director General. 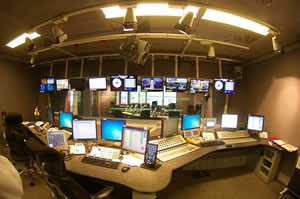 When the BBC began transmitting radio, people had no receivers at home. The BBC had to start from scratch, designing its own transmitters, microphones and studio equipment, as well as the sets for would-be listeners. This close association between broadcaster and listeners and viewers has seen the BBC creating a series of firsts, including the introduction of colour television, captioning, telecine, and the inventions of Ceefax and Nicam digital stereo.

Newsgathering has always been a spur to innovation throughout the corporation’s history. In 1997, for example, the BBC trialled live video news by using ISDN telephone lines to transmit a video signal. The first pilots were conducted in Munich, followed by tests in Pakistan. John Linwood recalled that, by sheer coincidence, the trials in Pakistan were underway as the 1999 military coup was taking place. The Pakistani army took over the country’s only satellite uplink, blocking all other broadcasts, but the BBC was able to use the new technology to get live coverage through.

Another breakthrough in mobile broadcasting was the BBC’s fleet of newsgathering vehicles. These vans double up as self-contained portable studios. A journalist inside presses a button, a satellite flips up and forms an uplink, and a wifi network is established around the van. Through these connections, camera crews back in the main studio can remotely operate cameras on top of the van for simultaneous broadcasts as the journalist reports from the field.

Coverage of the London 2012 Olympic Games represented another engineering challenge and opportunity to innovate. John Linwood had had three years to prepare his teams to deliver 24standard and 24 HD live feeds on web and satellite, so that viewers could watch all 2,500 hours of sport as it happened. The BBC also created web pages for every country, event, venue and athlete involved in the games. Setting up pages manually for all 204 teams and 11,000 competitors would have been prohibitively expensive and time-consuming. By using semantic technology to analyse different data feeds, cull relevant information and automatically generate and publish online content, the BBC was able to complete tens of thousands of pages using its new template. It was so successful that the techniques are being duplicated in other situations where large numbers of web pages need to be automatically generated.

In the future, the BBC will have to contend with the rise in online broadcasting from Google, Amazon, Microsoft and Apple, and learn to adapt BBC content to work with social media. BBC’s iPlayer is only 2% of viewer output now, but John Linwood estimates that this will reach 50% by 2016. Competition for spectrum between digital television and mobile networks will also increase, as viewers move to mobile platforms.

To address these concerns, the BBC will need more engineers who are able to anticipate technological shifts and apply them to broadcasting. It will be launching technology apprenticeship and trainee schemes to recruit new talent. Being able to access an excellent talent pool will enable the corporation to continue developing new ways of generating and distributing content.

As the BBC’s budgets shrink in real terms, creative engineering is needed to deliver greater amounts of high-quality programming at less cost. Some of the archives – and whole libraries of music – are stored in private clouds with BBC infrastructure. Local radio stations now save equipment, heating and cooling costs by linking in to shared libraries through ‘virtual studios’ with broadcast desks that can quickly be set up from any location. A metadata project begun 25 years ago to label archive content is also making decentralised storage and retrieval that much easier for programme makers.

John Linwood ended by saying: “The bottom line is that our budget is going down, and yet our services have to be as great and prolific as before. We have day-to-day challenges like moving 2,000staff to Manchester and transferring 3,000 people to our refurbished Broadcasting House near Oxford Circus. We’re having to get smarter and smarter about how we use technology and using it to be much more cost-effective.”