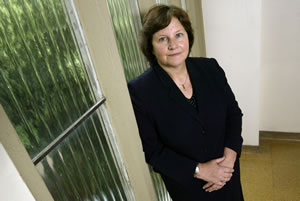 On 12-13 March, the Royal Academy of Engineering will host the Global Grand Challenges Summit at Savoy Place on London’s Embankment. Nearly 500 current and future leaders from the UK, the USA and China have been invited to discuss how engineering can address the most pressing world challenges. Professor Dame Ann Dowling FREng FRS, Head of the Department of Engineering at the University of Cambridge, explains the significance of this international get-together.

For the past six months, I have led an international steering group planning the agenda for this event. I observed the assembly of an impressive cast list of international figures, including Bill Gates, Robert Langer, Craig Venter, Frances Arnold, Lord Darzi, Jo da Silva, Jeffrey Sachs and Regina Dugan, among many others. Joining them will be a host of young engineers, scientists, innovators and entrepreneurs from around the world, with thousands more participating in satellite events staged by the IET in Glasgow, Birmingham and Bangalore, and a global audience watching seminar sessions live online. For a wholly new event, the level of ambition is as audacious as it is inspiring.

These individuals are coming together for what could be described as ‘Davos meets TED’: a bazaar of ideas where fresh thinking is the currency and practical solutions the prize.

Nobel Prize-winning economists will exchange views on the impacts of climate change with development specialists; pioneering doctors will debate healthcare with software mavens; engineers will explore the social impact of 3D printing with geneticists and politicians. New connections will be made, existing conventions challenged and radical ideas forged.

Why are we doing it? At the simplest level, because the problems facing the global community are too complex and urgent for any one group, or methodology, to tackle alone. Issues such as climate chaos do not recognise borders or ideologies, yet too often our response to them is localised, our thinking driven by specialisms which orbit around one another but fail to connect. In consequence, we address the problem in front of us only to discover that our ‘solution’ has simply transferred the stress along the line to another part of the system.

As engineers, we must recognise our responsibility here and the opportunity represented by the summit. Ours is an inherently collaborative practice but that cooperation often runs along orthodox lines. The nature of our projects demands focused expertise, but that can encourage silo thinking. We must communicate better – not least with the public, in whose name, ultimately, we all work. The same applies to political processes. We all decry political inertia; politicians do too! Nothing substantive can happen without a legislative basis, however. It is as much part of the ‘system’ as the research and the technology, and so it is appropriate that political representatives should be part of our dialogue and this event.

The germ for all of this was a 2008 US National Academy of Engineering (NAE) report, Engineering Grand Challenges for the 21st Century. For this project, the NAE brought together a group of respected international researchers, businesspeople and policymakers, including Past Academy President Lord Broers, to identify 14 engineering grand challenges that would drive the global research agenda in the 21stcentury.

The exercise caught the imagination of the engineering community in the US. Universities across the country began to use the NAE grand challenges as an anchor for introducing cross-disciplinarity and entrepreneurship into their engineering teaching programmes. Separately, an engineering curriculum for high schools was developed, which used the 14 Grand Challenges as a hook to introduce basic engineering concepts to pupils, and to educate them about the scope of engineering careers.

The first national Grand Challenges Summits began on US university campuses, and were originally intended as showcases of mission-led engineering to galvanise and enthuse an undergraduate student audience. However, the broader messages emerging from these events about the desperate need for an international ‘engineering systems’ approach to meeting global challenges began to interest a more senior audience. Soon, the events began to attract a heady mix of senior policy, industry and education stakeholders and future engineering leaders, promising students, researchers and emerging industry stars. This is a mix that gives rise to many opportunities for conversation and learning across generations as well as disciplines and sectors – and one I hope to replicate in our London summit.

In preparing this summit, there was some discussion about the relevance of the 14challenges set by the NAE in 2008 to the world in 2013. Should we introduce a 15th challenge based on a compelling call to action on climate change? Or should the point of the London summit be to come up with a new set of challenges?

In the end, it was decided that this was missing the point. The 14 NAE challenges were not intended as the last word on our engineering priorities in the coming century, and should not be read as such. Instead, they should be seen as a provocation. To what extent could an engineering-led approach define any global challenge and create a pathway to a solution? Do we have the knowledge, the networks and the support to even try?

I believe that engineering has a very special contribution to make. As engineers, we see problems holistically. We are trained to manage complexity and map inputs and outputs. We use data, not dogma, and practical utility is the Occam’s razor we apply to our answers. The Grand Challenges demand this approach.

For example, thanks to scientific research, legislation and the application of technology, levels of carbon emissions in the US and many other countries are falling; this is a ‘win’ for the climate. However, methane emissions are increasing, in part because of the increasing use of ‘climate friendly’ natural gas. Methane is 21 times more efficient at trapping heat than carbon dioxide, so its potential impact as a greenhouse gas is considerable. Our ‘systems of systems’ approach encourages us to look beyond this, and to find ways to capture more of these methane emissions and put then to use as fuel. There is a chain of events and consequences, feedback loops and outliers. In other words, the Grand Challenges can best be described and understood using the language we already use.

So much for the need. What will success look like? Noisy, disruptive and surprising!

But already there are encouraging signs that our summit will have a broader impact on the way international research collaboration is carried out. The Engineering and Physical Sciences Research Council (EPSRC) and US National Science Foundation are planning a Grand Challenges-themed joint activity, which will be announced at the Summit. Several US schools of engineering are also primed to launch International Grand Challenges postgraduate scholarships at the event. And the process of negotiating the summit has already served to deepen linkages and understanding between the three national academies involved. I hope that the Global Grand Challenges Summit in London this March will give attendees the ideas, connections and enthusiasm to work together to take the next steps on this necessary and exciting journey.