HOW DOES THAT WORK - Body Scanners 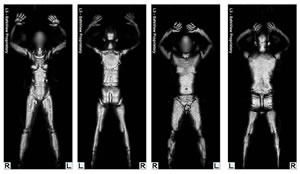 Airport security scans have come a long way since the first walk-through metal detectors were installed in US airports in 1972 following a series of hijackings. These detectors were adapted from devices used in the mining industry to find broken drill bits lodged in ore, and send electrical current through a coil to produce a magnetic field.

In the 1990s, improved scanners using backscatter X-ray technology were brought in for full-body imaging. Emitting low-level X-rays, they detect the pattern of absorption or reflection (backscatter) from the target object to form an image. They can identify organic, nonconductive material and show concealed weapons – metal or not – by their backscatter patterns. A decision to withdraw backscatter X-ray scanners which emit ionising radiation was made under an EU directive in 2011 “in order not to risk jeopardising citizens’ health and safety.”

A competing technology, using millimetre wave scanners, has caused controversy for producing too-realistic images of the bodies they’re scanning. The scanners use the 360-degree reflection and absorption of millimetre waves around an object, at a power output many times lower than personal devices like mobile phones, to produce 3D images. A version that produces more acceptable generic ‘stick’ passenger representations is now being rolled out across the US and incorporates automatic target recognition.

Future research proposed under a European framework programme aims to develop concepts based on millimetre wave scanners that would enable truly walk-through systems for passengers and significantly reduce pre-boarding queues at airports.