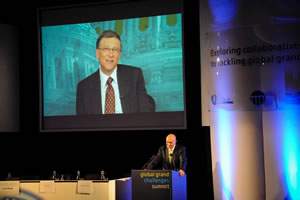 Bill Gates, on video link, addressing the Global Grand Challenges audience with the moderator Professor Jim Al-Khalili, in the foreground

In March 2013, the Royal Academy of Engineering brought together 450 leading engineers, scientists, economists, educators, artists, designers and policymakers from across the globe for the inaugural Global Grand Challenges Summit in London.

The summit, organised by the Academy in partnership with the national engineering academies of the US and China, sought to provide a new global platform for the world’s leading thinkers to share their ideas with the next generation of engineers on how to develop the international frameworks, tools and collaborations needed to solve our common global challenges. 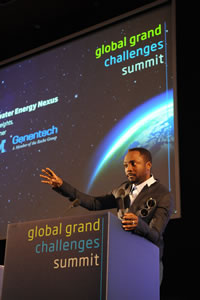 Highlights from the first day included a plenary address by Dr Craig Venter, founder of the J Craig Venter Institute, who spoke on the potential for synthetic life to improve access to energy, food and water. The summit was also addressed by a surprise guest: the entertainer will.i.am, who challenged the audience of engineers to compete with music and sport for young people’s attention.

On day two, the plenary address was given via video link by Bill Gates, who stressed that engineers will be vital in creating and delivering new and better drugs to solve many of the healthcare problems of the developing world, as well as in tackling climate change.

Two major new international collaborative research opportunities dedicated to the pursuit of tackling global grand challenges were announced at the summit. The first, a joint £1-2 million call for US-UK research proposals by the Engineering and Physical Sciences Research Council and the US National Science Foundation, focused on the provision of clean water for all. The second was the launch of the Charles M Vest NAE Grand Challenges for Engineering International Scholarship Program.

Footage of the summit and information about Grand Challenges-related research opportunities can be found on the summit webpage at: www.raeng.org.uk/global 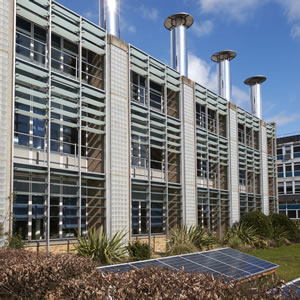 The BRE Environmental Office, completed in 1996, was one of the original smart buildings. It includes thermal mass cooling and solar-driven extract chimneys © Doug King

In March 2013, the Royal Academy of Engineering held a roundtable meeting with architects and engineers to consider the potential applications for smart building technologies. Highlights of the roundtable have been published in a new report.

Recent advances in data gathering and analysis are opening up new possibilities for smart building technology. For the first time, building management systems have the capability to learn and even anticipate their occupants’ needs and preferences for light, temperature settings and other services – while saving energy by targeting its supply.

The continuing expansion and upgrading of wireless networks and leaps in computing power mean that sensors and the internet of things will play a large part in smart design. While there are applications across all building types, they show special potential in the healthcare sector by remote monitoring occupants’ vital signs and behaviour patterns in order to identify any potential problems at an early stage.

The data created by smart buildings can be used to make reactive and even anticipatory alterations to suit the needs of the occupants, turning buildings into active monitoring systems. The relationship between the building and the user is an important part of smart systems and prompts designers and engineers to create user-friendly, reliable and instinctive interfaces. One of the tools of smart design that provides a platform for the generation and use of smart data is Building Information Modelling. This allows the sharing of data between architects, engineers, contractors and users from conception to post occupancy stage.

Development of smart buildings involves the integration and interaction of a range of building, corporate and third party systems. The creation of these complex ‘systems of systems’ will introduce new management challenges relating to the continuity and security of operations as processes and data cross organisation boundaries.

The full report is available at www.raeng.org.uk/smartbuildings 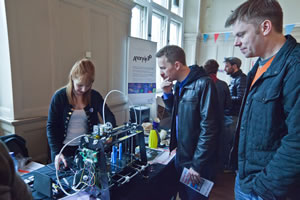 A ruler is made from recycled plastic at the Polyfloss workshop

Over 3,000 people attended Scotland’s inaugural Mini Maker Faire at the Edinburgh Science Festival. The one-day event demonstrated hands-on engineering and held applied manufacturing workshops. Maker Faires began as a festival of do-it-yourself technology in San Francisco in 2005, and have since spread to a network of events worldwide. They celebrate the innovation and possibilities of DIY with ‘makers’ showing how cutting-edge technologies can mix with well-established crafts. The Edinburgh Mini Maker Faire was a recipient of a Royal Academy of Engineering Ingenious grant, which supports public engagement with engineering.

In a workshop by electronic instrument builders Dirty Electronics, visitors learned about principles of circuit board design. They were then encouraged to build integrated circuits to make and play a hand-held synthesiser with oscillators, distortion, feedback network, filter and interference hum and radio.

A group of engineers and designers from the Royal College of Art with an interest in sustainability have honed methods to transform waste plastic into a new raw material called Polyfloss, a ‘plastic wool’. At the Polyfloss factory workshop, visitors to the festival used machines to shred plastic and produce the floss, which was then inserted into a rotating oven and moulded to make new products.

A full-scale event, Maker Faire UK, was held at the Newcastle Centre for Life in April, and further UK-based Mini Maker Faire events will take place later this year in Manchester (10-11 August) and Brighton (7-8 September). 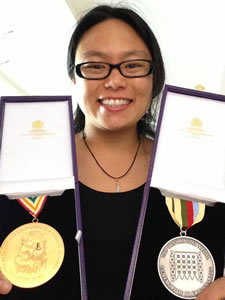 The annual SET for Britain poster competition aims to draw MPs’ attention to the UK’s thriving science and engineering base as well as rewarding the high quality research undertaken in UK universities. The 2013 awards ceremony took place in March at the House of Commons, and was attended by some 100 parliamentarians.

In the engineering category, Dr Valeska Ting, a Prize Research Fellow from the Department of Chemical Engineering at the University of Bath, won the gold medal and £3,000 prize for her research exploring the use of nanomaterials to store solid-like hydrogen.

Her work provides a new understanding of how the molecular structure of storage materials influences gas storage capacities. Her research has shown that the density of hydrogen in the pores of solid materials can be used to improve the ways that hydrogen’s capacities can be modelled and predicted. This will lead to more accurate comparisons between different nanoporous hydrogen storage materials which will in turn inform the design and development of hydrogen storage systems and transportation applications. Dr Ting will use her prize money to attend an international conference to present her research.

The runner up and silver medal winner in the engineering category was Dr Paul Richmond, of the University of Sheffield. He won the early-stage researcher prize of £2,000 for his work on the use of graphics processing units (GPUs) to build agent-based models that simulate group behaviour in complex systems. The agent-based approach takes advantage of the cost-effective supercomputing capabilities of the GPUs, which excel at processing in parallel. 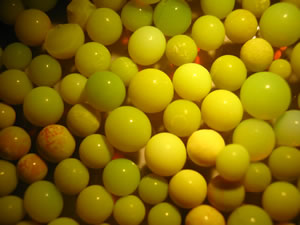 On 15 March, the Great British Innovation campaign launched a website celebrating innovations of the past century, and new technological breakthroughs that could have similar influence on the 21st century. From a list of the ‘greatest hits’ in British science, engineering and technology, members of the public voted for the most important innovation of the last 100 years and the one they predicted will have the greatest impact on the future.

The results of the Great British Innovation vote were announced on 25 March, when Alan Turing’s ‘universal machine’, the theoretical basis for modern computers, was chosen by most respondents as the most influential innovation of the 20th century, beating such breakthroughs as X-ray crystallography and the discovery of pulsars.

Ionic liquid chemistry was chosen as the most popular innovation of the future. Fluid salts – liquids containing positively- and negatively-charged units of asymmetrical shapes that remain liquid at room temperature – can be used to dissolve almost everything, including sulphur and phosphorus, which traditionally required toxic solvents, as well as polymers, including biomass. In Malaysia, fluid salts are being used in industry to remove the mercury from natural gas. At Queen’s University Ionic Liquid Laboratories (QUILL) in Belfast, where these solvents were discovered, nearly 100 scientists and engineers are developing further uses for them.

The campaign was supported by the Science Museum, Royal Academy of Engineering, Royal Society, British Science Association and EngineeringUK. Although voting has ended, a website describing the shortlisted innovations, the research and discoveries behind them, and their applications remains online at www.topbritishinnovations.org