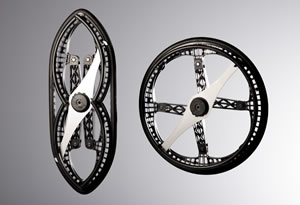 Duncan Fitzsimons first conceived of a folding wheel when he was a design student at the Royal College of Art. It was a designer’s appraisal of what couldn’t be done with a folding bike that sparked his imagination, and from that moment his concept has moved through several phases, won awards and gone into production in the US.

Royal College of Art student Duncan Fitzsimons recognised a design challenge when listening to a talk on folding bikes given at the college by a visiting designer. As Fitzsimons considered how to fold a tyre, he pulled it into a torpedo shape and the idea for a folding wheel was born.

He created several failed prototypes, in which inflatable tyres would explode under weight and contortion. Fitzsimons then focused on solid, rubber tyres and everything fell into place. A pair of spokes folds out, giving the wheel shape and bearing weight. A third, solid spoke serves as a lock to ensure that the wheel stays open.

After lodging a patent so the design was ‘out there’, he heard from wheelchair users that despite increasingly sophisticated folding frames, they still encountered transportation problems posed by their chairs’ large, inflexible rear wheels. Supported by the Dyson Foundation and Innovation RCA, Fitzsimons redesigned the folding wheel for this application, developing a prototype in aerospace-grade aluminium.

He then linked up with plastics manufacturer Maddak, a US company specialising in home healthcare and rehabilitation products, to work on the finer points of the detailed design.

Cost, weight and performance considerations led to the final version being made of a tough, lightweight glass-filled nylon composite for the wheel itself and rubber for the tyre. A polypropylene compound is used for the pushrims alongside the tyre, preventing the user’s hands from heating up when braking, while still allowing enough grip to push efficiently.

Maddak is confident of the finished product and has made the Morph folding wheel the central focus of its marketing campaign in the US for 2013. The wheel has also brought honours to its maker, with Duncan Fitzsimons and the company he co-founded, Vitamins, being a finalist in the Saatchi and Saatchi World Changing Ideas Award in 2008 and, most recently, the winner of the Transport Category of the 2013 Design of the Year Awards, hosted at the Design Museum in London – see www.morphwheels.com