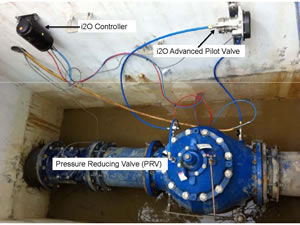 UK company i2O Water decided to tackle the complex global challenge of reducing leakage from clean water distribution networks almost a decade ago. It has since developed and deployed a range of Advanced Pressure Management technologies that are saving over 100 million litres of water each day around the world.

It is estimated that over 30 billion cubic metres of treated water are lost from global water supplies each year. In 2005, entrepreneurs Adam Kingdon and Andrew Burrows launched i2O which is headquartered at Southampton University’s Science Park. The company develops innovative Advanced Pressure Management technology that conserves supplies within existing water distribution networks and overcomes the limitations of traditional pressure management technology. These basic pressure management techniques either lock in a pressure that is too high (or too low) and are unable to respond effectively to the changing demands on the network.

When trialled, the prototype system immediately began delivering significant benefits. The wide range of cost, operational and environmental benefits have subsequently been proven in service with over 1,500 systems deployed to date, with 50 water companies in 22 countries worldwide. The company has grown to more than 60 employees, with offices in Malaysia, Spain, Colombia, Thailand, South Africa and Australia.

An average 20% fewer leaks and up to 40% fewer bursts are obtained by water companies using their system. Over and above the huge savings in drinking water enabled by i2O systems every day, the environmental credentials of the company’s systems are boosted further still by optimising the performance of pump-fed zones that save energy usage, typically around 20%. This has been recognised with numerous awards including, most recently, the 2013 ‘Innovator of the Year’ prize by the New Energy and Cleantech Awards.

Crossrail: tunnelling on an epic scale

Crossrail engineers are constructing 70m of tunnels each week with specially designed tunnel boring machines, while ensuring Underground lines and the city above remain undisturbed

HOW DOES THAT WORK? - Clean rooms