FloWave, based at the University of Edinburgh, is the world’s first test tank designed for modelling both wave and tidal conditions anywhere in European waters. The tank allows for up to 1/10 scale model testing conditions, and adds a critical evaluation stage to the development cycle of new wave and tidal power generating devices, between small-scale testing and full-scale offshore prototype. In hours or days, FloWave can simulate conditions that would take months or years to encounter at sea, and this reduces development costs and time to market.

The tank is 25m in diameter and 4.8m deep, and can generate conditions corresponding to full-scale seas with 28m waves and currents of up to 6 m/s. Waves and currents in the tank can act in any combination, in any relative direction across a central test area which is 17m in diameter. A rising tank floor and overhead crane enable installation of individual devices, or arrays of wave or tidal current generators.

Because the tank is curved to allow 360° symmetry of wave and current conditions, complexities of wave and tidal conditions can be simulated and repeated, reducing the need to conduct expensive offshore testing at a later stage. Waves are generated by 168 force-feedback wavemaker paddles which line the circumference of the tank. The paddles are able to absorb energy, so that when a specified wave programme is requested, each one can generate or absorb energy from the system, rather than reflect it.

The capital cost of the project is about £9.5 million, jointly funded by the Engineering and Physical Sciences Research Council (EPSRC) and the University of Edinburgh. Further collaboration with the European Energy Marine Energy Centre in the Orkneys will enable 10 years of open sea data to be incorporated into the tank testing programme – see www.flowavett.co.uk 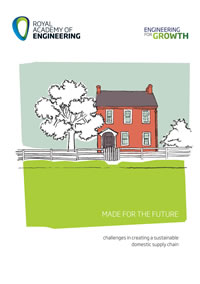 Made for the future report

The Royal Academy of Engineering published Made for the future in November 2013. The report summarises the results of a series of workshops which brought designers, researchers and engineers together to investigate the environmental impact of consumer goods. Talks ranged across a number of subjects including how the ways that domestic products are designed, made, bought, used and disposed of can be adapted and improved to become more sustainable.

It is not always obvious whether it is better to keep an old appliance for as long as possible, or to upgrade to a newer, more efficient model. However, tools have been developed to calculate the lifetime resource and energy impact of consumer goods and work out how long they must last to ‘make up’ for the resources used in their manufacture. These tools can guide the designer to create genuinely sustainable products and enable consumers to make educated choices.

Another concern was how designers, engineers, and manufacturers can mitigate the environmental impact of everyday living. The meetings asked how technological innovations, from 3D printing to newer, less energy-intensive methods of recycling, could reduce the amount of material resources and energy used in the production of household products. They also looked at how technologies used in the home itself, from smart metering and appliances that can manage the demands they make on the electricity grid, can have a positive impact on reducing overall energy use.

The report concluded that a better understanding of consumer behaviour is needed: about the variety of choices that people make when choosing products, how they use them and how long they keep them. This would better inform designers and engineers, and help them create genuinely sustainable technologies that meet people’s needs. 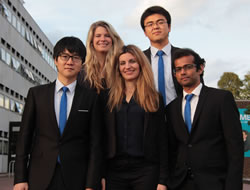 This year’s Lloyd’s Register Foundation Collegium brought together 24 international postgraduate students, representing 22 countries, to the University of Southampton. They came to develop engineering solutions to the coming challenges that coastal cities will face, resulting from the combined effects of climate change and rising sea levels.

The Collegium, now in its third year, gathers together scholars from a wide range of academic disciplines to work in small, mixed-discipline groups through a programme that includes lecturers drawn from academic research institutes and industry partners. It focuses on boosting the scholars’ knowledge of new and emerging technology and engineering systems, regulatory and commercial issues and design challenges.

Each group prepared a major technical paper suitable for publication in a peer-reviewed journal, in which they defined the functions of coastal eco-cities before sharing their problem-solving ideas. Topics included a design for a decision-support tool to be used in city systems planning, to ensure that the needs of all affected people are taken into account; a plan for a hydrogen fuel cell system to power Southampton’s public transportation networks, and biomimicry-inspired schemes to reduce Dover’s carbon footprint by implementing ‘Oyster Wave’ power generation technologies and eco-cement to store CO₂.

Other projects included a scheme to transform the economy of a small island, dependent on imported fossil fuels, with ocean-powered energy generation, and a detailed comparative analysis of two coastal ecocity projects, one Asian and one European, to develop a framework to integrate elements from both approaches into the design and planning process.

All five papers can be downloaded here: http://tinyurl.com/qhdbkmb 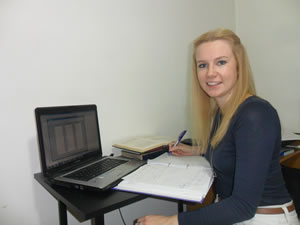 The Royal Aeronautical Society and the Royal Academy of Engineering have created a bursary scheme to address the need for MSc-qualified engineering professionals in the UK’s growing aerospace sector.

The scheme is designed for people who would like to pursue careers in this field but would not otherwise be able to fund their MSc studies. As well as partnering with companies in the aerospace sector to provide advanced training to promising members of the existing workforce, the scheme also targets talented graduates from disciplines such as physics and mathematics who may not previously have considered aero engineering. People with good first degrees in these and related STEM disciplines have already acquired the theoretical foundation on which to build the specialist learning that approved MSc courses deliver and which UK aerospace now requires.

This is the path taken by Emma Cooke, one of this year’s bursary winners. She studied maths at Aston University and graduated with a first. During her final year, she studied a module called Chaos and Dynamical Systems, and was interested in the subject’s application to aerodynamics and turbulence. She applied to join the scheme, and is now on an MSc at Imperial College London.

Announced by the Prime Minister at Farnborough in 2012, applications to the scheme opened in February 2013. At the end of round one, the target of awarding 100 tuition fee bursaries, each worth up to £9,500, has been achieved, with 16 of these awarded to women. A further 200 bursaries will be awarded in each of the next two years, bringing the total to 500.

Funding for the scheme comes from UK government, the Northern Ireland Administration and nine major aerospace employers, working in partnership with the joint administrators of the scheme. 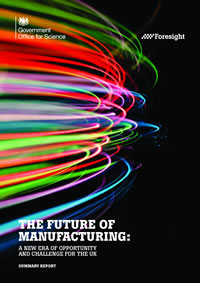 The future of manufacturing: a new era of opportunity and challenge for the UK report

The Government Office for Science, Foresight Programme has published a report entitled The future of manufacturing: a new era of opportunity and challenge for the UK. The report, which was launched at the Royal Academy of Engineering in October, examines evidence-based scenarios for industry over the coming decades, and sets out recommendations for policies to keep the UK’s manufacturing sector competitive in the global marketplace.

Manufacturing currently contributes 10% of the UK economy’s value and employs 2.5 million people. In the years up to 2020, around 800,000 roles will need to be filled. The report suggests that UK policymakers focus on apprenticeship schemes, support for researchers, and the supply of skilled managers.

Successful firms will need to adapt their physical and intellectual infrastructure to exploit changes in technology as manufacturing becomes faster, more responsive to big data and changing global markets, and closer to customers, with the expanded use of sensors and 3D printing. Companies may also benefit by moving towards a ‘servitisation’ approach of supplying technical expertise, not just physical products – a profitable strategy for firms such as Rolls-Royce and Arcelor Mittal. Manufacturers will also need to become more efficient in their use of materials and energy to counter volatility in the price and availability of resources.

The report recommends that government policy is informed by data which accurately reflects how manufacturing is connected across the economy and how its needs are changing. It asks that policy is tailored to the specific requirements of industries to support new ways of doing business.

A final recommendation is that government create an Office for Manufacturing, to keep up with the pace of change in manufacturing . Such an office would also work with Infrastructure UK to align the UK’s infrastructure and manufacturing priorities over the long term.

For more information and to view the evidence base visit http://bit.ly/su2A6w 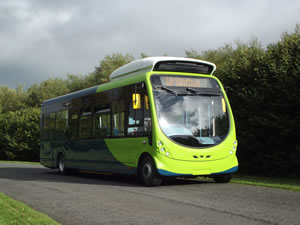 The first UK electric buses to be fitted with wireless charging devices are replacing diesel buses on an urban, public passenger route. The number 7 route in Milton Keynes, which runs 14 miles each way between Wolverton and Bletchley, transports 775,000 passengers a year over a total of 450,000 miles. In a five-year trial scheme, which begins in January 2014, eight electric buses are serving the route, seven days a week. This has the potential for preventing 500 tonnes of CO2 emissions being released into the atmosphere each year, as well as 5 tonnes of other noxious tailpipe emissions.

The buses charge when power transmitted from a primary coil buried in the road is picked up by a secondary coil on the bus. The primary coils are placed at two points on the bus route ( a third will be added later). This technology, known as ‘induction power transfer’, allows for ‘opportunity charging’ whenever the driver has a scheduled break at the end of the route. Approximately 14% of each electric bus battery’s energy will be replaced after just a 10-minute ‘opportunity’ charging session.

The trial is managed by Mitsui-Arup joint venture MBK Arup Sustainable Projects (MASP). John Miles, Arup/Royal Academy of Engineering Research Professor in Transitional Energy Strategies at the University of Cambridge, initiated the trial with MASP. MASP’s ultimate aim is to use the data collected by the Milton Keynes trial to demonstrate the economic viability of low-carbon public transport. This data could be used to kickstart electric bus projects in other towns and cities across the world.

HOW IT WORKS - Lift prioritisation

From sensors to microprocessors controlled by algorithms, engineers have improved the systems controlling lifts to save energy and passenger waiting time