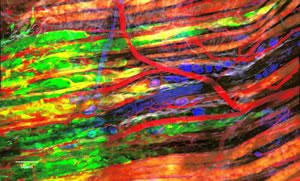 Use of a Chameleon laser to view tumour cells infiltrating soft tissues. The tumour cells are shown in green and the resolution obtained is 0.33μm per pixel © B. Weigelin, P. Friedl

Multiphoton microscopy uses femtosecond laser technology to deliver much faster and deeper imaging, allowing the study of samples in real time. It is particularly valuable for biological studies and medical research tasks.

Until Coherent Scotland took on the challenge of developing a more user-friendly system, the field of multiphoton microscopy remained largely inaccessible – the preserve of university academics and specialised laboratories. Controlling the dispersion, power and pulse width of the previous generation of lasers required hands-on support by dedicated physicists.

With the Chameleon, complicated laser-based physics problems are solved in a single-box unit. Biologists can turn a key and set the wavelength they desire for their imaging. The Chameleon also removes the need for complicated monitoring systems to oversee the laser’s performance.

Since the more versatile Chameleon laser has become available, the range of biomedical examination applications has expanded to include studying structures and learning processes within the brain that are affected by conditions such as Alzheimer’s and Parkinson’s. The Chameleon is able to examine structures deeper inside living tissue, including neurons at the moment of firing. It has also been used to evaluate the effectiveness of drugs in cancer research and how tropical diseases propagate throughout the bloodstream.

Scotland is one of the centres of excellence for the optoelectronics industry, along with California and Germany. Coherent Scotland is a 12-year-old company which has been a satellite business unit of global giant Coherent Inc since 1999. It has built a skilled, self-contained and multidisciplinary 100-strong team its headquarters at the West of Scotland Science Park in Glasgow. The facility researches, designs and also manufactures its cutting-edge laser-based products.

The company has exported its range of ultra-fast, tabletop lasers – designed for use by frontline practitioners in hospitals, universities and dedicated research centres – to 45 countries around the globe, including Antarctica. The Chameleon’s ease of use and range of applications have led to exports worth more than £100 million, as well as growth in other areas of the multiphoton microscopy industry that have piggybacked on this success.

A concrete-impregnated fabric, first developed for building durable emergency shelters, is now being used as a quick, cost-effective method of laying concrete throughout a range of industries

Racing multihulls were built for the 34th America’s Cup, that regularly reached speeds of more than 50mph