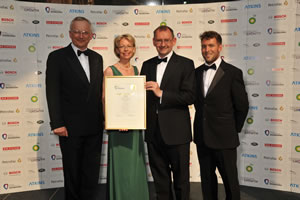 RealVNC won the 2013 MacRobert Award for software that allows a computer screen to be remotely accessed from another device across the internet. The software is on over a billion devices and used in all walks of life. Dr Andy Harter FREng, the founder and Chief Executive of RealVNC, talks of the origins and upcoming uses for the software.

RealVNC software allows a computer screen to be accessed remotely and controlled from another device. Originally invented for a purpose far more specific than the range of functions it now fulfills (‘let your desktop follow you around’ was an early proto-slogan), VNC is now so ubiquitous that it is an official part of the internet, alongside web and email protocols, and used on more than a billion devices.

Earlier this year, RealVNC won its third Queen’s Award for Enterprise in as many years. To win three is unusual, but holding three at once (each expires after five years) is very rare. In July, the company was also honoured with the MacRobert Award, making RealVNC one of the most successful companies in Cambridge’s technology cluster – the so-called ‘Silicon Fen’.

RealVNC’s innovation originally enabled IT teams, in particular, to provide online users with remote technical support, troubleshooting issues from their own terminals, rather than having to visit the computer with the problem. To this day, helpdesk support remains VNC’s primary function and goes some way to explaining why it is now so widespread. Back in 1998, when it was originally released, VNC was non-commercial, open-source software online. These were the early days of open-source projects, and search engines were not as omnipresent and omnipotent as they are now. It was not clear how people would discover the software, or whether they would find it useful.

On day one, however, over 100 people worldwide downloaded the software. By the end of the first week, that had risen to a few thousand. The spread became viral and the numbers have never stopped going up. Starting VNC as an open-source venture successfully created a market for the commercial-grade versions which then followed. By the time RealVNC was formally founded in 2002, there were already 100 million people using the software, many of whom were, as a result, interested in the professionally engineered and supported commercial products that RealVNC was now offering.

The founders decided to grow the business organically, without conventional investment funding. Their strategy was to tap into the sentiments of the loyal and devoted fanbase, selling ‘I Love VNC’ branded goods such as t-shirts, mouse mats, baseball caps and document bags. Some fans didn’t want merchandise and simply sent money, supplying the seed funding necessary – an early example of ‘crowdfunding’.

VNC works by replicating screens at the level of individual pixels, compressing these, and enabling them to be decoded by a second computer. By making the formula no more complex than that, the company’s product has become universal across a whole range of platforms, including those which did not even exist when it was first released in 1998, and the technology is designed with the flexibility to integrate with platforms that are yet to come. As a result, while RealVNC is in many ways a company exploiting the same core technology over and over again, opportunities for new applications are constantly appearing on the horizon. 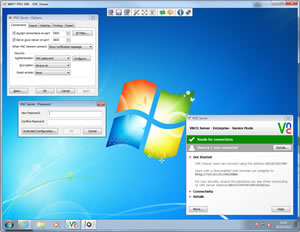 IT technicians use VNC to remotely access another PC. They see exactly what is on that PC and control it as if they were sitting in front of it. The VNC Viewer toolbar provides access to features such as chat, file transfer, full screen mode and keyboard commands

The business model has altered since it first launched, with direct sales of commercial-grade software a major part of it. A typical customer nowadays might be a relatively small IT team of about ten people managing a thousand computers on behalf of an organisation. At the same time, the software is licensed out to the likes of the semiconductor chip manufacturing giant Intel, which pays royalties to RealVNC in return. In the Intel partnership, a recent family of computer chips now includes a direct remote access capability in silicon that works even if the software on the computer itself is faulty. Powered by VNC technology, this novel approach has the potential to transform the IT support industry.

While technical support remains VNC’s foremost application, its capacity to drive information-sharing between devices has led to uptake in sectors such as education, engineering and design. For example, VNC is now a standard component in most MRI scanners and X-ray machines. In many cases, it is now possible to fix problems, calibrate, test and even upgrade such equipment remotely, rather than leaving patients and staff waiting while a technician is sent to the hospital. Philips, Siemens, General Electric and Fujifilm all adopted the technology and have been able to significantly reduce the number of engineer visits to a range of medical imaging equipment in hospitals, veterinary practices, clinics and even cruise liners.

Among emergency services, police departments in the US are using the software to access computers in the field, allowing IT issues to be resolved remotely. Officers of the Alexandria Police Department in Virginia not only have radio communication but mobile computers for use in the field. Having direct technical access to these tactical PCs has increased the confidence of officers on the ground and reduced the downtime when there are technical issues, as IT problems can be fixed in real time.

In the communications world, satellite fleet operator Telesat Canada has a dozen satellites in orbit and manages the same number again for third parties. RealVNC allows remote monitoring of telemetry systems and provides 24/7 access to multiple sites around the globe. The software means that staff can track the launch of a satellite and view its progress from offices or from home, enabling troubleshooting to be done instantly . It also provides cross-platform access on both UNIX and Windows systems. 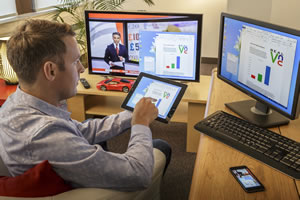 Security is a paramount concern – a tool that allows one person to take over another person’s computer screen is powerful, and requires sophisticated and robust security measures to make sure it is not misused. Before any screen data is transmitted, the connection achieves end-to-end authentication using a public/private key exchange sequence. Then the screen-data transmitted during an established connection is encrypted, preventing snooping and ‘man-in-the-middle’ attacks. The key lengths for authentication and encryption are current best-practice within the security industry. Another protective level is enabled by a number of additional mechanisms that can be configured when the software is installed to provide additional security, such as requiring a person to explicitly accept each request to take over their screen, which therefore means they must be physically present.

The fundamental engineering challenge was how to make the software available on as large a range of computers and mobile devices as possible. The solution was to organise the software to have as much of the complexity as possible in a common device-independent core, with only the aspects that vary from device to device in an outer wrapper.

The clarity and elegance of the design enables the software to be easily portable onto any kind of computer that has a screen and an input device, including those that do not yet exist, and interoperable between all such implementations (another very early proto-slogan from 1996 was ‘any-to-any’). Because of this approach, and the zeal with which it has been followed, when smartphones and tablets first appeared, it was immediately possible to make VNC software available, allowing access to computer screens from mobile devices. 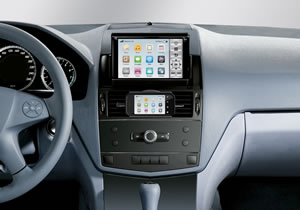 VNC Automotive enables realtime display and control of a mobile device by displaying it on a screen on the dashboard. It gives drivers access to all their mobile content such as navigation applications, traffic updates, music libraries and internet radio stations

Free versions of the software remain an important marketing tool, not only supporting widespread use and awareness, but also allowing third parties to prototype the use of remote access functionality into their products, as was the case with Intel. When a company is ready to create products, RealVNC is ready with upgraded versions and commercial licensing. Google approached RealVNC for a license to the core software with a requirement to provide a way of using traditional desktop applications from within the Chrome browser or Chrome operating system. The resulting collaboration has seen elements of VNC software embedded in Chrome, solving a technical challenge that Google was unable to overcome on its own.

The company employs about 100 people in its Cambridge city centre offices, most in engineering roles. The vast majority of the company’s work is in research and development, focusing on new products and applications. The most recent example is the ‘deskhop’, a new app bringing screen-sharing to Facebook users in a simple and easy-to-use way.

Designed to be usable by anyone with a Facebook account (about a billion people), deskhop works by prompting two people wanting to share screens to temporarily run a small software program on their computers. The two programs then automatically establish an encrypted connection together over the internet, resulting in one person taking over the screen of the other.

Deskhop is also useful for the technical helper who supports friends and family with their IT issues, or students who want to collaborate on a document but are not in the same room. When either person disconnects, both programs are automatically deleted, leaving no trace. It is not possible for either party to re-establish the connection without the other’s permission, nor for anyone else to connect in. The screen owner always has priority over control of the mouse, and can therefore disconnect the other person at any time.

Another recent innovation sees VNC at the heart of a standard to connect smartphones with the displays in dashboards and seatbacks of vehicles. ‘Infotainment’ is the automotive industry term for providing information and entertainment within the car. Smartphones have emerged as ubiquitous personal devices, storing not only contact lists, audio tracks and movies but also providing a personal set of applications from a constantly expanding choice. The challenge of creating infotainment in the car was how best to integrate the smartphone with the vehicle. RealVNC’s innovation was to use VNC technology to mirror the smartphone screen on the large touchscreens now being built into cars, and so use all the content and applications which are native to the smartphone.

A fertile new marketplace for the software is in consumer electronics and home entertainment systems. In partnership with some household names in the broadcast industry, RealVNC is embedding VNC technology into set-top boxes. The initial application is the typical one, providing improved customer care and helping call-centre staff to resolve customer problems more efficiently by literally seeing what is on the customer’s TV screen and by simulating the action of the remote control. However, beyond that is the ability to connect, control and interact with any digital devices around the home that have a screen. For example, people are using the software to look at their email on the PC in the study while sitting in front of the network-connected smart TV in the sitting room.

Ingenia wishes to thank Thomas Kirk from the University of Cambridge Communications Office for permission to extract portions from an article published at http://tinyurl.com/ol7fbbb

HOW IT WORKS - Lift prioritisation

From sensors to microprocessors controlled by algorithms, engineers have improved the systems controlling lifts to save energy and passenger waiting time