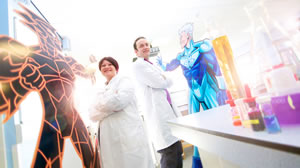 Two comic book writers who have created some of Marvel and DC Comics’ world-famous characters have teamed up with the University of Central Lancashire (UCLan) for a superhero-inspired project funded by the Royal Academy of Engineering’s Ingenious public engagement programme. Ingenious is a grant scheme for creative public engagement with engineering projects.

Andy Lanning and Anthony Williams have over the last 25 years illustrated and written the stories for Batman, Captain America, Superman, Iron Man and America, Superman, Iron Man and X-Men comics. Now they have comics. Now they have used their talents to give UCLan a Gotham City-style makeover and turned engineering lecturer Matt Dickinson into a superhero character as part of a national schools’ science competition.

A team of engineers are also working on the project, providing online materials that children can access as part of their research into what existing technological and engineering knowledge can be applied to create the characters’ super powers.

Dr Jo Heaton-Marriott, Public Engagement Manager at UCLan, is coordinating the Hero Lab project and will also be included as a character in the comic book.

The Hero Lab project has beenfunded by the Academy as a follow-up to the successful Science of Superheroes show run by Matt Dickinson over three years, where the lecturer shared the science fact behind the science fiction of many well-known characters such as Spiderman, Wolverine and Iron Man.

Ingenious has funded over 120 projects to date, providing opportunities for over 2,000 engineers to take part in thought provoking activities, to gain skills in communication and to promote the role of engineering at the centre of society.

The next round of Ingenious grant funding will open in late summer 2014, and is open to all applicants with creative ideas for public engagement with engineering. For further information on the scheme, visit www.raeng.org.uk/ingenious 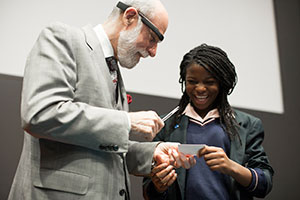 Nominations are now open for the second Queen Elizabeth Prize for Engineering (QEPrize) which will be awarded in 2015. Anyone can make a nomination for an engineer, or a group of engineers, responsible for a groundbreaking innovation that has been of global benefit to humanity.

The inaugural £1 million prize was awarded in 2013 to five engineers who made seminal contributions to the development of the internet and the World Wide Web: Louis Pouzin, Robert Kahn, Vinton Cerf, Tim Berners-Lee and Marc Andreessen. They received their award from Her Majesty The Queen in a ceremony at Buckingham Palace in June last year.

In May, 17-24 year olds in the UK will be invited to enter a Create the Trophy competition for the next QEPrize. Competitors will use the latest programming and design technology to design and create the trophy. The top entries will be 3D-printed into prototypes so the judges to can view the creations and talk to their designers before selecting the winner. The resulting trophy will be presented and given to the 2015 QEPrize winner.

To make a nomination and for more information about QEPrize activities visit www.qeprize.org or follow on twitter: @qeprize 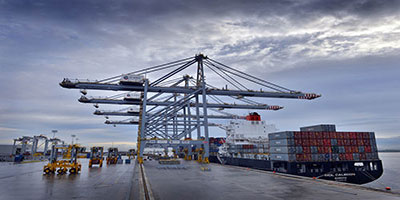 In November 2013, the 58,000 tonne MOL Caledon, carrying fruit and wine from South Africa, became the first container ship to dock at the London Gateway. This new deep-water port on the River Thames is situated in Thurrock, Essex, 25 miles away from Central London. Built by Dubai-owned company DP World, at a cost of £1.5 billion, it will expand the shipping capacity of the Port of London, giving it the potential to become the largest port for container shipping in the UK.

Approximately 90% of the UK’s imports arrive by sea with many of these delivered to the south east. With container ships measuring 400m in length and stowing up to 18,000 20m containers, London needed a port with deep enough water, expansive berths and large enough cranes to accommodate the increasing container ship traffic. The first three of eight 137m cranes for loading and unloading have been built. Each is taller than the London Eye and can reach across 25 containers.

Two further berths will open by 2015, and when complete, London Gateway will house six berths along its 2.7m-long container quay, with a capacity of 3.5 million containers moving through the port each year.

The new port has its own rail links and road distribution networks and Europe’s largest logistics park is being built next to it. DP World says the Gateway will cut the cost of transporting goods to the south east and it estimated that 150,000 tonnes of CO2 per year will be cut off the journeys of the 2,000 trucks that will use the port every day. Some 10,000 construction jobs have been created by the project to date, and another 10,000 are expected to be made for the logistics park. 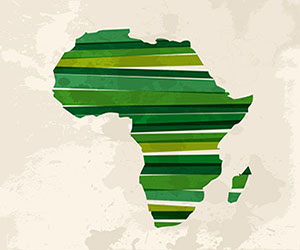 March 2014 sees the launch of the newest prize awarded by the Royal Academy of Engineering: The Africa Prize for Engineering Innovation. The prize has been established to stimulate, celebrate and reward innovation and entrepreneurship in sub-Saharan Africa. It will encourage ambitious and talented sub-Saharan African engineers from a wide range of engineering disciplines to apply their skills to develop scalable solutions to local challenges, as well as providing support for the commercialisation of their innovation.

Between now and 30 May 2014, the Academy will be accepting applications from engineering graduates living and working in sub-Saharan Africa, who are affiliated with a university or research institute. A shortlist of exceptional applicants will receive six months of training and mentoring from both UK and African sources, which will help them develop their innovation into a thriving business. The three most promising entrepreneurs will present their innovations to a panel of judges at a celebratory event in Africa in 2015, where a winner will be chosen to receive the £25,000 prize.

The Africa Prize is supported by The Shell Centenary Scholarship Fund, Consolidated Contractors Company, ConocoPhillips and the Mo Ibrahim Foundation. It will run annually for an initial period of three years. Further details, including detailed entry requirements and application forms can be found on the Academy website www.raeng.org.uk/AfricaPrize 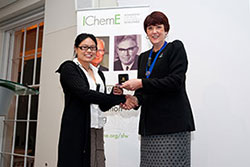 Dr Valeska Ting, Prize Research Fellow in Smart Nanomaterials at the University of Bath, has been awarded the Sir Frederick Warner medal by the Institution of Chemical Engineers (IChemE) for 2013. The medal is presented biennially to an individual, normally in the early stages of their career, who has shown exceptional promise in the field of sustainable chemical process technology, nuclear technology or in making chemical engineering more accessible to a wider scientific community.

Dr Ting was appointed as a University of Bath Prize Research Fellow for the Department of Chemical Engineering in 2012. Her research interests includes sustainable technologies and developing methodologies for the accurate testing and evaluation of novel porous nanomaterials that have the ability to safely and efficiently store gases. These materials can be applied to the problems of hydrogen storage and carbon dioxide capture and sequestration.

She has also contributed to the design and development of equipment for in situ neutron diffraction experiments for use at the Institut Laue Langevin, Grenoble, France, as well as helping to develop and test high pressure gas sorption apparatus currently in use at the University of Bath. Other previous research includes analysis of the crystal structures of polymorphs of the widely used cancer drug, Cisplatin, with implications for the drug’s storage and delivery in successful treatment.

Her latest work includes the design of multifunctional porous materials, in particular, investigating which factors dictate the efficiency of novel materials for gas storage, and how their structures can be controlled to tune their properties for different applications.

For more about Dr Ting and her research, visit http://people.bath.ac.uk/vt233 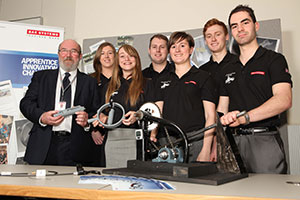 The winning team of apprentices, based at BAE Systems’ Military Aircraft business in Warton, set out to answer a brief set by Help for Heroes, which challenged the apprentices to improve the safety and usability of hand bikes – usually used by people with little or no power in their legs. The team used Facebook to determine the most frequent user complaints about hand bikes, before engineering a new anti-twist gyro mechanism which houses the brake cables and stops them from twisting and breaking.

Extensive testing showed the brake cables were much more resistant to breakage with the new gyro. As yet, it has proved unbreakable even after 500 miles, where as normal cables usually break around 90 miles. The team also designed a new rotating handle, allowing users to reposition their hands and avoid muscle fatigue on longer rides. Both products used innovative 3D printing techniques in their construction. The team intends to use the company’s partnership with UK Sport to test the products further at Manchester Velodrome.

The team was made up of a mix of technical, business and shop floor apprentices from across BAE Systems’ sites at Warton and Samlesbury, Lancashire. The Warton team were then announced as winners at the UK Apprenticeship Awards on 23 January 2014. For further information, visit www.baesystems.com/careers

During their lifetime, the new Shannon class will make up a third of the RNLI fleet, and, it is estimated, will rescue over 50,000 people © RNLI

In February 2014, the Royal National Lifeboat Institution (RNLI) launched the first of its new Shannon-class all-weather lifeboats. These new boats are capable of 25-knot speeds, 50% faster than their predecessors, and are light enough to be launched and recovered from a beach. They are the first lifeboats in the UK to be propelled by water jets, rather than traditional propellers. This increases their manoeuverability and allows them to operate with reduced risk of damage to their propulsion systems.

The lifeboats were developed by a team of RNLI engineers to a set of specifications emphasising passenger and crew safety, low craft weight, as well as high speed and performance in storm conditions. The team consulted test data from previous lifeboats and adapted them to the demands of water‑propelled craft. They then chose a warped hull form, with the ‘v’ shape at the bottom of the boat pitched forward, towards the bow, with two chines, or corner-like intersections between the bottom and side of the boat. Model testing showed that this shape would increase stability and protect passengers and volunteer crews from the slamming accelerations often experienced on high‑speed vessels.

The boats have a naturally far-forward centre of lateral resistance. A deep central keel could not be relied upon for roll damping and directional stability, so side keels were included outside the line of the water jets. The project team carried out interactive testing to ensure that the hull design provided optimal righting moment capability, and followed this with finite element analysis of the hull and testing at sea in storm conditions.

There are 50 Shannon lifeboats scheduled for deployment within the next ten years, patrolling the coasts of the UK and the Republic of Ireland.

Ingenia looks at the engineering challenges behind one of Europe’s most ambitious space missions.

Clansman Dynamics makes a range of heavy-duty foundry and forge machinery, and has developed the G30 grinder which reduces strain and improves the view for grinding operators.

Patrick Bellew RDI FREng, of environmental engineers Atelier Ten, outlines the engineering challenges and solutions generated by the Gardens by the Bay project.

HOW DOES THAT WORK? - Plastic Pounds

Polymer notes are already valid currency in more than 20 countries, following Australia’s pioneering development and introduction of them in the 1980s.