In the UK, the size of cow herds can number from a handful to a thousand, making it difficult to check individual cows' states of health. A new behaviour monitoring collage uses predictive analytics software to detect conditions such as when cows are in heat.

Dairy farmers need to track the oestrous cycles of their cows to maximise milk production. However, as modern herds increase in size, keeping track of the behaviour of each cow becomes more difficult. Individual monitoring, especially in herds of several hundred or more, is labour intensive, and often the signs of oestrous are misdiagnosed–causing wasted insemination, lower calving rates and lost productivity. To avoid this, Glasgow-based Silent Herdsman, a spin-out company from the University of Strathclyde, has devised a system that uses collars with attached sensors to constantly monitor the fertility of herds.

Each collar contains a 3-axis accelerometer, which measures the cow’s head positions in 3D. Predictive analytics software in the collar tracks the changes in each cow’s head movements, and alerts the farmer when the movement patterns indicate oestrous. (The collars can also be used to detect movement patterns related to other conditions.) The collars then send alerts over wireless networks to base stations, and the data are then analysed by the monitoring software.

Farmers are able to check on their herds online by a mobile version of the software interface, and can be alerted by text or email when it is time for cows to be inseminated. While the collars measure head movement at all times, they only send alerts when farmers need to take action, conserving the battery life of the collars.

As well as tracking the cows’ behaviour, the software can be annotated with notes about illness, handling by farm staff, or veterinary treatment of individual cows, in order to improve the welfare of the herd. The collars are designed with a quick-release mechanism, so that there is no risk of injury to the cows if they catch on anything.

The system can be adapted to different farming styles, from free-grazing organic farms to enclosed, climate-controlled barns. So far, Silent Herdsman is in use across Europe, in Asia, and the US, and has just raised £3 million in new funding to accelerate growth and further expand worldwide. 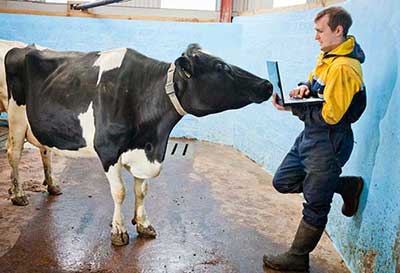 This article is about how SORS analyses the composition of chemicals sealed within any nonmetallic container without the need to open it, which has a range of potential applications including medical diagnostics and airport security.

This article is about Ingenia examining how the industry is addressing the engineering challenge of creating cost-effective structures.

HOW DOES THAT WORK? - Black boxes (From a suggestion by Richard Walder)

Black boxes have been mandatory in airliners since the 1960s when wire recorders were used, followed by magnetic tape, and now solid state hard drives.

This commercial and artistic success is cited as one reason for the recent increase in state support for the UK’s film industry, raising tax relief rates and lowering spend thresholds.