Radio-frequency identification (RFID) technology has been around since the 1970s. The first RFID tags were used to track large items, such as livestock and airline luggage. Now, smaller and more sophisticated versions are used to track consumer products, vehicles, pets and even Alzheimer’s patients worldwide. 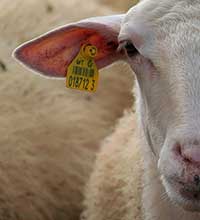 A sheep with an RFID tag © Steven Walling

RFID tags are passive devices that have no power supply of their own. Instead they capture and re-radiate some of the radio energy sent towards them by the tag reader, such as the Oyster card checkers on London transport. These send out carrier waves at specific frequencies that cause resonance in circuits within the passive tag. This resonance can activate internal circuitry that can reflect back a simple “I’m here” response suitable for store security devices or can modulate this response with a short code which can uniquely identify the tag.

Because the tag reader cannot emit too much power, for health and regulatory reasons, and because the tag can only reflect a small amount of this, the range is necessarily short – a metre at best.

One of their main selling points within retail is that the microchips can store a unique serial number for every product. UK-based retailer Marks and Spencer, for example, has some 10 million RFID-tagged food trays and 10,000 clothing items constantly being moved around its supply chain.

They have not replaced bar codes entirely but the trend is for more products to be tagged with RFIDs and an increased focus on seamless wireless transactions.

The inventor of the world’s first universal self-adjustable eyeglasses had the latest version of these spectacles shortlisted for the Design Museum’s 2013 Design of the Year Awards.