On 14 December 2013, a Chinese Moon probe named Chang’e 3 (CE-3) made the first soft landing on the lunar surface since the Luna 24 mission by the Soviet Union in 1976. The lunar lander, named after the mythological Chinese goddess of the Moon, used a landing site north of the Mare Imbrium on the Moon’s nearside, an area not yet visited and so of great interest to planetary scientists and robotocists. The task of CE-3 and its surface rover, named Yutu, is to provide understanding of this little-known area. 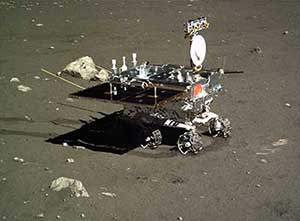 The Yutu rover as photographed by the lunar lander. It is equipped with an infrared spectrometer and a robotic-arm mounted alpha particle X-ray spectrometer to analyse lunar soil © China National Space Administration

Key elements of the mission are a topography camera (TopCam) on board the static lander and panoramic stereo cameras (PanCams) on the rover, which are gaining extensive image data about the terrain during Yutu’s robotic journeys. A UK team led by Professor Yang Gao at the Surrey Space Centre, linked to the University of Surrey, is playing a central role by collaborating with Chinese lunar geologists and developing innovative robotic vision processing techniques that extract highly accurate terrain properties from TopCam and PanCam data.

Professor Gao has twice received the Royal Academy of Engineering’s Research Exchange Major Award with China, which helped her establish close links with Chinese space researchers. Her team’s work reveals the extent to which the wheels of Yutu have sunk into the local lunar surface. During its 100m of travel so far, the 140kg vehicle has left tracks of around 1cm deep. This shows greater terrain stiffness of the CE-3 landing site than predicted before the mission.

Crucially for future lunar missions to the area, the team’s work with the camera images, combined with telemetry data from the rover, has investigated terrain properties of the CE-3 landing site, including Moon rock size and distribution. These findings will help inform geologists and engineers on landing site selection and on rover design and sizing for future Moon missions. 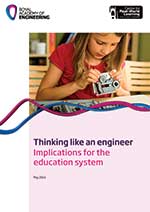 Young children are natural engineers, but the primary school system does not encourage that mindset, and even secondary school teaching of engineering is highly variable, according to a report commissioned by the Royal Academy of Engineering, which has repeatedly highlighted a looming skills shortage in the engineering sector.

Researchers at the University of Winchester’s Centre for Real World Learning, who prepared the report, Thinking like an engineer - implications for the education system, interviewed a wide range of engineering educators and practising engineers to identify the ‘engineering habits of mind’ that generate very specific ways of thinking and approaching problems.

Children, says the report, are constantly seeking to understand the properties of materials as they engage with the world around them. However, the education system has come to expect young people to move away from practical learning and to become more theoretical and abstract.

The report proposes that the engineering teaching and learning community considers redesigning curricula – primary, secondary, further and higher education and, potentially, family learning – to cultivate learners who think like engineers.

The introduction of the new National Curriculum for England from September 2014 offers a chance to create more opportunities for engineering through new programmes of study for computing, mathematics, and science, as well as design and technology. The report recommends that organisations promoting engineering should seize this opportunity to support schools in introducing more engineering-based content to the new curriculum.

The full and summary versions of the report can be downloaded at www.raeng.org.uk/thinkinglikeanengineer

At a speech to the Medical Research Council’s Laboratory of Molecular Biology in Cambridge, on 25 April, the Chancellor of the Exchequer announced that £200 million would be spent on a new icebreaking polar research vessel. This will be equipped with the latest technology available in order to help maintain the UK’s leading edge research in the Antarctic and Arctic.

The new vessel is scheduled to begin its first science mission in 2019. It is expected to be 130 metres long with a beam of 25 metres and a gross weight of around 13,000 tonnes. Its reinforced hull will be stronger than any predecessor, and initial technical specifications call for the ship to be able to maintain a speed of at least three knots while breaking through two-metre thick ice floes. 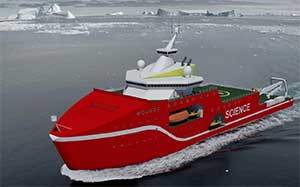 Built with the capability for containerised laboratories, the new ship will carry enhanced environmental monitoring systems providing data from the deep ocean, the surface ocean and the atmosphere. It will also serve as a hub for remotely operated deep-sea vehicles, which will be able to explore the harshest environments and examine the seabed in unprecedented detail. The icebreaker will be equipped with a helipad and cranes to launch airborne and sub-surface manned and unmanned vehicles, and be capable of housing as many as 60 scientists and support staff for continuous self-sufficient missions of up to 80 days.

UK scientists constantly monitor the polar regions, and changes in levels of sea ice, which are key to understanding the global environment. Long-term studies also observe marine ecosystems and biodiversity. Two vessels are already undertaking these tasks: the Royal Research Ship (RRS) James Clark Ross, built in the UK in 1990, and the Norwegian-built RRS Ernest Shackleton which is on long-term charter to the British Antarctic Survey programme.

A new Formula E championship begins on 13 September in Beijing. The zero-emissions all-electric cars may look similar to their Formula 1 counterparts but they are a lot quieter, generating 80dB – slightly more than the average road car. The cars, which sit on an ultra-lightweight chassis of carbon fibre and aluminium, accelerate from 0-60 mph in under three seconds with top speeds of up to 150mph. 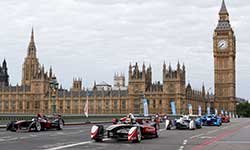 After the opening race in China, the series sees a further nine races at circuits across North and South America, Asia and Europe, concluding next June with a race around Battersea Park in London. Despite this globe-trotting, all the two-driver, four-car teams will use a central engineering base at Donington Park for the coming season, and will use exclusively the Spark-Renault SRT_01E chassis design.

The total weight of the car is around 800kg, a quarter of which is the weight of the 200kW (270bhp equivalent) batteries from Williams Advanced Engineering. As well as the battery pack, the electric powertrain – provided by McLaren Electronics Systems – includes a governing engine control unit and an inverter that transmits torque to spin the motor generation units, which must be attached to the rear axle.

From the second season on, Formula E will become an open championship; this will allow teams to design and develop their own cars, in accordance with Fédération Internationale de l’Automobile (FIA) rules. The championship will then showcase electrical energy innovations which the organisers hope will prove transferrable to everyday car designs of the future. The longer-term goal of Formula E is to promote the increased use of electric cars on city streets in order to help counter health and pollution problems.

The Royal Academy of Engineering is one of eight UK institutions selected by government to help deliver the Newton Fund, a £375 million investment over five years to build the UK’s research and innovation links with emerging economic powers. The fund’s primary focus is to develop partner countries’ long-term sustainable growth and welfare through building research and innovation capacity. It also hopes to lay the foundation for ongoing collaboration between the partner countries and the UK, promoting the UK as an international partner of choice.

The UK has identified 15 countries as partners under this fund, including China, India, Brazil and South Africa. Collaboration under the Newton Fund will be carried out under three pillars: people, research and translation. Along with the other national academies, the Academy will focus on innovation capacity-building for individuals and institutions.

Over the next five years, the Academy intends to carry out over £16 million worth of activities aimed at building innovation capacity across 15 emerging powers in Asia, Africa and South America. These activities should also help enhance the international links and profile of the UK’s next generation of engineering researchers and entrepreneurs, including those associated with the Enterprise Hub.

The Academy’s first call for research collaboration with Newton Fund partners opened on 1 September and will close on 22 October. This call will fund the cost of one-way or two-way exchanges lasting between three months and one year between researchers in the UK and their counterparts in many of the Newton partner countries. The exchanges must help build research capacity in the partner country, and the theme of the exchange must be relevant to social or economic development challenges.

More details are available at www.raeng.org.uk/grants-and-prizes

Radio-frequency identification (RFID) technology has been around since the 1970s. The first RFID tags were used to track large items, such as livestock and airline luggage.