The inventor of the world’s first universal self-adjustable eyeglasses had the latest version of these spectacles shortlisted for the Design Museum’s 2013 Design of the Year Awards. Using fluid-filled lens technology, the adaptive spectacles change the curvature of lens surfaces - which in turn changes the power of the lenses. This has created the potential for the widespread, low-cost manufacture of corrective lenses.

Professor Joshua Silver is an atomic physicist who until recently was leading a group of researchers in the Department of Atomic and Laser Physics at the University of Oxford. In 1985, Silver developed a way of making fluid-filled variable focus membrane lenses. He assembled early prototype lenses on his kitchen table, adjusting the power of the lenses by varying the amount of water in the lens with a syringe. The prototype lenses evolved into eyeglasses where the wearer could adjust each membrane lens to correct their own refractive error. These lenses use silicone oil rather than water.

Silver and colleagues then started clinical research, initially with adults and later with teenagers, establishing that over 90% of myopic teenagers can self-refract with good accuracy. This confirmed that the approach would be useful for large numbers of people in the developing world, where there are too few eyecare professionals.

In 1996 Silver formed a company, Adaptive Eyecare Ltd, to develop adaptive eyeglasses, and the company received support from the UK government’s Overseas Development Administration to trial the Adspecs adaptive eyeglasses. The clinical trial showed that the Adspecs worked well for myopic, hyperopic and presbyopic adults, and as a result over 50,000 pairs of Adspecs have so far been distributed in some 20 countries.

In 2009, Silver co-founded the non-profit Centre for Vision in the Developing World with his colleague David Crosby. In 2010, Silver was approached by James Stephenson of the Dow Corning Corporation, makers of the high refractive index inert silicone oil used in the lenses. They have worked together to produce a new version of the Adspecs that would appeal to teenagers. These come with detachable adjustment cylinders on the arms of the frames. Users set their spectacles to the correct level of correction, press buttons to seal the lenses in place, and detach the adjustment cylinders – see www.vdwoxford.org 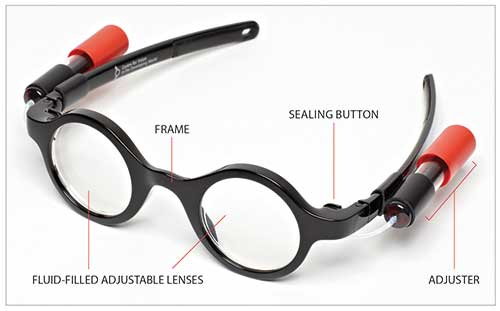 Radio-frequency identification (RFID) technology has been around since the 1970s. The first RFID tags were used to track large items, such as livestock and airline luggage.

Two of the UK’s sharpest young manufacturing entrepreneurs have been awarded Royal Academy of Engineering Silver Medals for their achievements.