Arch bridges are strong, durable and require little maintenance. However, very few had been built since the early 1900s until the FlexiArch was developed and launched in 2007. Now, there has been a minor renaissance for this ancient form of construction.

Ten years ago, Professor Adrian Long FREng of Queen’s University Belfast, patented a system for building structures with all the positive attributes of conventional masonry arches, but which were able to be assembled quickly and economically. 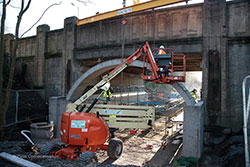 The trouble with traditional masonry arches is that they are slow and expensive to construct. The voussoirs - the wedge-shaped stones forming the arch – are difficult to cut accurately and temporary timber centering is needed to support the arch while it is built. Using brick instead of masonry still requires centering, and rigid precast reinforced concrete arches can lead to long-term maintenance problems.

Long’s solution was a system of pre-casting concrete voussoirs for rapid assembly and ease of transport, making use of one of the main advantages of the arch:the principal forces are compressive, so no reinforcing steel is required. With help from various grants, Long worked with Macrete, precast concrete engineers from Northern Ireland, to produce a system which is user-friendly for contractors.

The voussoirs are first cast in un-reinforced concrete, with angles calculated to produce the correct curvature of the arch when completed. These are then laid side-by-side on the flat with their top, wider edges touching, and a layer of polymeric reinforcement is placed on top. Then, a 40 mm layer of screed (fine aggregate concrete) is placed on top and allowed to harden, holding the voussoirs together. 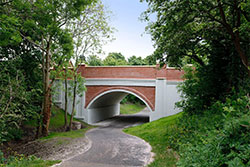 Several such slabs can then be transported easily to site, in flat-pack form.When lifted from the truck at designated lifting points, gravity causes the arch to flex into its final form, governed by the angle of the voussoirs.

Tests show that the Macrete Flexi Archbridges have enormous reserves of strength,and early applications have confirmed that each unit can be placed on site in as little as 10-15 minutes. Over 50 FlexiArch 4 m-16 m span bridges have been installed in the UK and Ireland and plans are in place to increase the maximum span to 30 m. Discussions are currently underway with companies in Australasia, USA and Sweden with a view to sub-licensing the technology.

The Bombay Sapphire glasshouses built in Hampshire have pushed the engineering design of glass and steel structures to the limit, creating opportunities for the materials to be used more efficiently, sustainably and at less cost in the future

The rise and rise of GPUs

When will cars drive themselves?

There are many claims made about the progress of autonomous vehicles and their imminent arrival on UK roads. We look at the engineering behind these predictions